Former Guantanamo Bay detainee Omar Khadr spoke publicly on stage for the first time about the struggles he’s faced navigating life after a childhood defined by violence and conflict — and about what can be done to protect children in the future.

The discussion event Monday evening (February 10) featured Khadr, a Canadian citizen who was injured and captured in conflict in Afghanistan at age 15 and spent 10 years in detainment at Guantanamo Bay prison, as well as another former child soldier Ishmael Beah, who at age 13 was coerced and used as a solider in Sierra Leone’s civil war.

Hosted by the Roméo Dallaire Child Soldiers Initiative, in partnership with Dalhousie's Open Dialogue series, the event, held in the Dalhousie Arts Centre’s Rebecca Cohn Auditorium, provided a unique opportunity for attendees to hear from Khadr about his experiences.

Khadr told the capacity crowd that, while he’s still figuring out his future, he knows he has a role to play in the world — and that "there’s nowhere better to start than [here],” given the Dallaire Initiative’s mission to end the recruitment and use of child soldiers around the world. He considered the event an opportunity to share his story in a platform hosted by an organization "who understand people like myself." 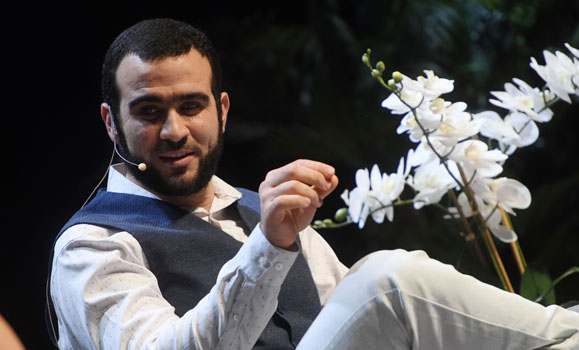 The event took place just ahead of “Red Hand Day” today (February 12) — the International Day Against the Use of Child Soldiers. Tickets were by donation with all proeeds going to the Roméo Dallaire Child Soldiers Initiative.

Lieutenant-General The Honourable Roméo Dallaire (Ret.) himself was on hand to deliver opening remarks, as were Frank Harvey, dean of Dal’s Faculty of Arts and Social Sciences, and Shelly Whitman, executive director the Dallaire Initiative and moderator of the night’s discussion.

“Tonight we are here to challenge and unpack our perceptions about who is a child soldier,” said Dr. Whitman in her introductory remarks.

“We live in time when war is complex,” she later added. “Conflict transcends national boundaries. Globalization impacts greed and grievance and competition for short attention spans appears to be more important than taking the time to delve deep and question perceptions versus realities.” 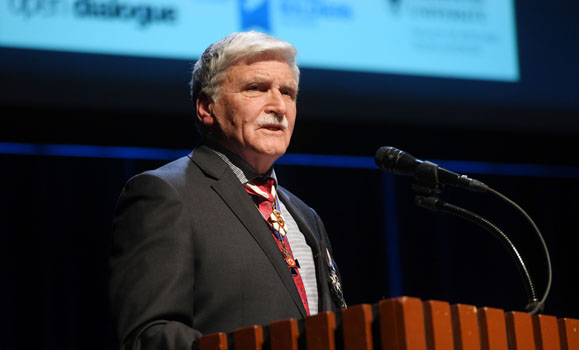 “Nothing will erase the moral dilemma that we face in this new era of conflict where we face child soldiers,” said Lt. Gen. Dallaire, who led the United Nations peacekeeping mission in Rwanda during that country’s genocide in 1994. He said he wants to prevent future peacekeepers from becoming casualties of this moral dilemma, stating that action must be taken to “take children out of the inventory of war.”

Catching up on what’s lost

Ishmael Beah, the speaker joining Khadr on stage Monday night, was once one of those children, drawn into the civil war in Sierra Leone in the early 1990s. Today, he’s a father of three, a human rights activist and author of several books including a memoir of his experiences. A confident speaker, Beah said he still feels exhausted sometimes from being unable to escape other people’s perceptions of his past, and the need to constantly prove himself. 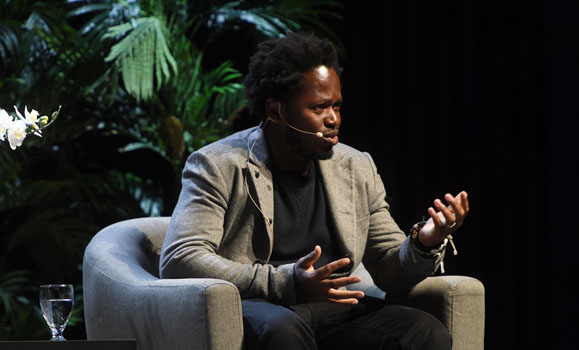 Though Khadr was unable to discuss some elements of his experience, he did share his thoughts on what it’s like growing up in a world of war and violence, and how that affects children like him.

“War almost becomes a part of normal life,” said Khadr, who was born in Canada but was moved to Afghanistan with his family at a young age and grew up immersed in conflict. He said it made him “desensitized” to what was happening around him.

Beah said he lost everything during the Sierra Leone Civil War — and that becoming a soldier became his new life and his new reality.

“War became my life and that’s all I ever knew,” he said. “I knew how to survive, but I didn’t know how to live. All the circumstances that you come out of, they consume you.”

The speakers also shared their respective experiences coming out of that world.

Beah recalled going through rehabilitation and psychosocial therapy to address the stigma of being a former child soldier. “The stigma can destabilize you and it can very easily drag you back into your old self,” he said. 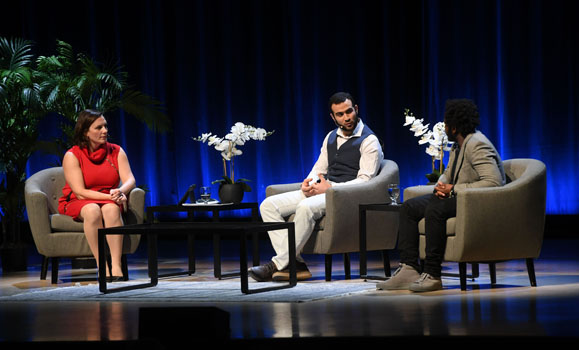 For Khadr, hope was important. “But I couldn’t find it in anything worldly, so I had to find hope in my faith and that sustained me,” said Khadr. He said how important it was to have others who helped him see beyond his past experiences towards something different for his future.

Both men also conveyed their concern for children living in conflict zones — children at risk of getting caught up in those conflicts as they were.

“I worry about the sheer number of kids and their vulnerabilities and wonder how they’ll be treated by the world,” said Khadr.

Throughout the discussion, Beah was often asking as many questions of Khadr as Dr. Whitman and the audience were. (Attendees at the event, including students from several local high schools, were able to submit questions online for consideration.) He clearly shared the crowd’s eagerness to learn more about the human being behind the headlines.

In one of the final questions of the night, Khadr was asked what he wanted the Canadian people to know about him. 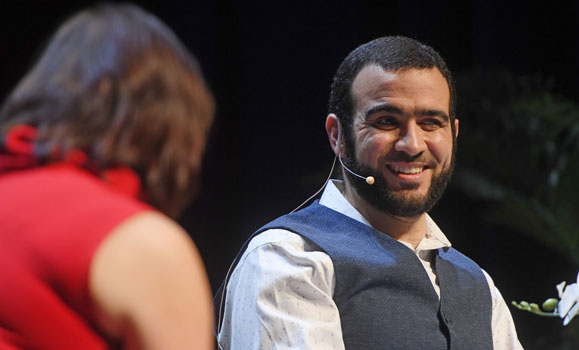 “I hold no grudges against anybody. I understand that certain people are not going to like me and that’s okay. Some people are going to disagree with me and that’s also okay. In the end, we are all human beings: we all have the same needs, we all feel the same pain. I believe a lot of situations, what makes it so complicated is we have so many barriers between us and our essence — whether it’s our nationalities, our faith, our political views, our ethnicities… all these things come between us and the other human being.”

“I hope people can make a fair judgement of me,” he added. “I’m a person that’s just trying to figure things out in life having been in survival mode for many years of my life.”