For Dartmouth native Emily Fraser, the inspiration to pursue her Master of Arts degree rose from some sound advice.

“Someone — perhaps my sister? — once explained their mindset on research and it became an inspiration going into my MA,” says Emily, who graduated this week. “They said you are given the freedom or flexibility to research something you are interested in. In a world where I feel we are often told what to do, when to do it, and how to do it, I wanted to take advantage of the chance I had to feed my brain and my interests.”

Those interests led her across the Canso Causeway to Cape Breton Island, to a vast array of craftmakers and sellers. Sparked by her interactions with the Cape Breton Centre for Craft and Design, which markets the island as a “Craft Capital,” she began to envision an Anthropology master’s thesis focused on crafting, tourism and the political, economic and social aspects of life on the island.

“In travelling around the island, using routes [craftspeople] may take to and from markets or key hubs, stopping in to speak with craftspeople in their studios while they worked, I got a sense of both the many challenges and positive aspects of living in — often rural — Cape Breton,” she explains. “Much of my thesis draws upon the lived experiences of those wonderful people who took time out of their busy summer season to speak with me.”

Her thesis looks at, among other topics, the relationship between craft and geography, the dynamics between craft businesses and their communities, and the role of tourism on craft producers and organizations.

One of the main points drawn from her findings was the impact that access to the Internet has on the craft sector in rural communities – how it helps to root people in place and build a sense of local instead of taking it away, while also connecting them to consumers and colleagues beyond their local communities. 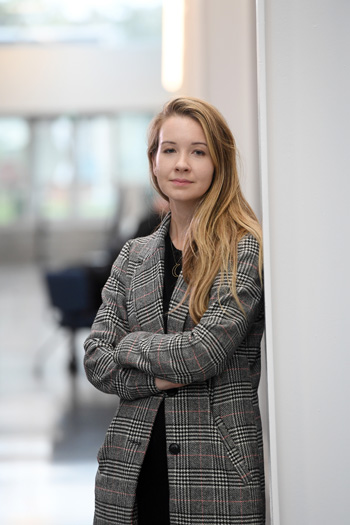 “In Cape Breton, this meant making sales, bringing people from across the globe to craft events, and expanding professional opportunities. Thus, people who otherwise would have moved from the region – or not moved to the region – were able to locate themselves in a place that inspired them without having to necessarily sacrifice business or creative growth. Further, craftspeople were able to order supplies they otherwise could not get locally which expanded what they were able to make.”

Another key finding of her research addressed the need for Nova Scotia to be supporting the small- and medium-sized businesses scattered across the province.

“A few participants expressed frustration with money being put towards huge corporations with no ties to the region and which will leave after a few years, putting communities in bad situations,” Emily explains. “As such, a big emphasis in Cape Breton was the importance of succession planning as well as providing the broader support structures required to encourage businesses to both start and thrive. The succession planning is of particular concern in Cape Breton due to the aging population and outmigration.”

Emily’s thesis was supervised by Martha Radice, who she worked with as a research assistant during her undergrad. That connection was key to her decision to stay at Dalhousie for her MA, despite acceptances to two other schools.

“I've always enjoyed working with Emily,” says Dr. Radice, “because she is creative as well as thorough in her approach, and because we both share a passion for how art, craft, and culture make a difference to our lives.”

Emily received both SSHRC funding and a Nova Scotia graduate scholarship to support her research, which helped a great deal in allowing her to focus her energies on the work. Still, even though her  research was innovative, financially supported and of great interest to her, it was not without its hardships.

“I did struggle a bit on a personal level during approximately six months of my MA,” she says, speaking to a sense of isolation that came particularly after she was done her coursework and working on her own. “I went through a difficult time that I do not attribute to the thesis-writing process, but it was affected by it. I found it hard to stay afloat beyond waking up and going to work and the idea of writing my thesis was just not something I could handle amongst my personal situation.”

She credits Dr. Radice’s support and encouragement for helping her push through, as well as what she gained by engaging with the people she met through her thesis.

“To get through the other end of that time period, inserting myself back into activities that involved learning and people was really helpful. I have since taken tapestry and weaving courses at the Centre for Craft Nova Scotia which help me to understand the time and energy put into those craft media while also feeding that need to learn.”

Emily also has worked in arts administration for the Dalhousie Arts Centre since her first month on campus as an undergraduate student, and praises her bosses for being so accommodating and understanding of her school responsibilities throughout her two Dal degrees. She adds that her work in arts administration has helped her to understand some of the points that her research participants spoke of regarding arts grants, policy, and communicating with the public along with maintenance issues, technical glitches and preparing advertising, and gave her a sense of how difficult it can be to actually operate some of these galleries and craft centres.

Now that her thesis is completely finished and she has walked across the stage and received her parchment at Fall Convocation, Emily feels a great sense of accomplishment.

“Made in Cape Breton: Examining the Relationship Between Craft Practice and Place will always be something I wrote, with input from supervisors and information from participants, based on data I collected and analyzed. I don’t want to come across as too cheesy or too self-absorbed but instead really proud of myself for having something out there in the world with my name on it.”