It was high fives all around after Dalhousie research engineer Nathaniel Pearre and mechanical engineering student Mitch Gregory converted a 1971 Triumph Spitfire into a modern-day electric car.

The pair have been working on the project for several months.

“When I bought it, it was running, but just barely,” says Dr. Pearre, who works with Dalhousie’s Renewable Energy Storage Laboratory.

The car was in desperate need of a thorough tune-up, a new exhaust system, a balanced drive shaft, and a lot of in-depth work.

“The previous owner had done an engine and transmission swap, scuttling much of the original value the car may have had, as well as much of the 'fun to drive' factor provided by a manual transmission.”

But for Dr. Pearre, the car was perfect. After hunting for a classic to convert from gasoline into an electric-powered vehicle, the Spitfire was a keeper.

“I was specifically looking for something with engine or transmission issues, but a solid body and frame. I was also hesitant to convert something with a lot of historical or market value,” he says. “A Spitfire nicely combines classic British '60s - '70s swoopy good looks, with ready availability and less concern about being a steward of an historical artifact. The automatic transmission in particular made it a great candidate for this electric conversion project.” 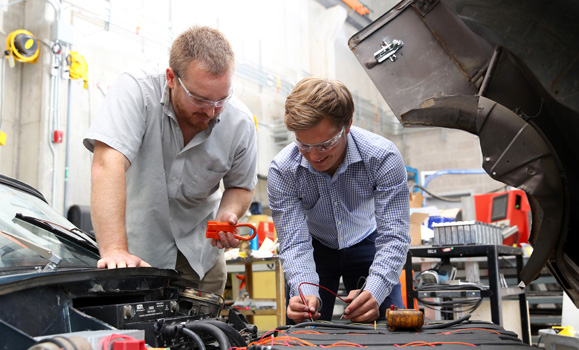 After extensive discussions with Lukas Swan, Director of the Renewable Energy Storage Lab, and associate professor in the Faculty of Engineering, on how to tackle the project, Pearre began the process of converting his vintage purchase into a modern day gem.

“I had the ‘Spit’ in my garage for nine months, slowly taking out all 'the oily bits'”, he says. “We got as far as starting to think about motor and battery layout before moving the vehicle to Dal.”

Accessing resources within the Faculty of Engineering’s new Heavy Prototype Lab in the Emera IDEA Building, and hiring third-year undergraduate student Mitch Gregory to assist with the project, Dr. Pearre says he was able to complete most of the fabrication and installation required in the conversion of the vehicle.

As part of the project, the car engine, transmission, gas tank and exhaust were all removed. In their place, custom aluminum battery boxes housing 37 kWh of high voltage lithium iron phosphate batteries were installed. The battery packs were then connected to a 125 kW drive motor to give the vehicle outstanding modern acceleration.

“Having access to the Heavy Prototype Lab was a godsend,” says Dr. Pearre, who required the use of large equipment within the lab and support from technicians Albert Murphy and Graham Muirhead, to machine, shape and weld two separate and complicated battery boxes in the front and rear of the vehicle.

“The biggest thing was shoehorning enough batteries into a very small car. Because of our motor and battery selection we needed a rather preposterous volume of batteries,” he says. “Fitting them all in while keeping weight distribution in mind occupied a significant amount of the project timeline.”

“We've upgraded the suspension to deal with the added weight and we'll probably upgrade the brakes, though regenerative braking will take much of the work of slowing the car. We’ve also made some modifications of the firewall in front of the dashboard to fit the motor controller, and the floor of the trunk to fit one of the battery boxes.” 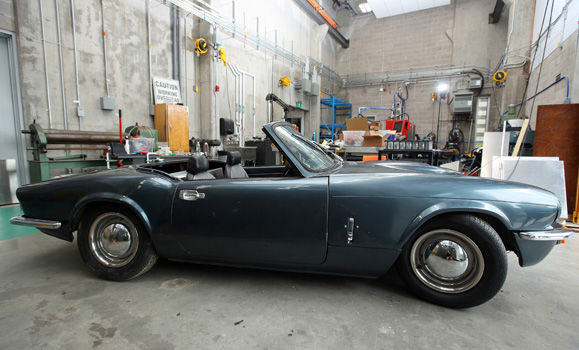 Although a few other tweaks and changes were also made, Dr. Pearre says almost everything within the Spitfire is still in its original state except the drive train.

“Body, frame, what's left of the interior, and all the running gear, other than upgraded suspension, are stock. It's a ‘rudimentary’ car. Just seats, a battery, a motor, lights and wheels. Just you and the road.”

And he hopes to soon hit the road in his new electric vehicle. The Spitfire, which is expected to have a range of 200 km, will be cruising around the streets of Halifax at this time next year. But for now, there are a few more minor adjustments to make.

“We are a few days of work away from finishing the wiring, at which point we have to get all the pieces of onboard equipment to talk to each other correctly and then it should roll,” says Pearre. “It's hard to imagine a project like this ever being really Done with a capital D.”

Dr. Pearre says he hopes the Spitfire will serve as a showcase for the mechanical engineering department and he plans to display the vehicle at various events around the region. His first was September 21 at the Electric Avenue event hosted by Clean NS with support from Nova Scotia Power. Approximately 150 members of the public stopped in to view and chat with Dr. Pearre and Gregory about the vehicle.

“Our hope is to spur interest in electric vehicles in general, but in particular inspire excitement about the groups and projects within Dalhousie that involve or develop electric drive technology,” says Dr. Pearre. “Gregory is currently planning the development of an electric vehicle racing team for Dalhousie, most likely under the Formula SAE – Electric program.”

Dr. Pearre says he’s driven many different types of cars in the past, but he’s never been in a convertible electric vehicle.

“But the idea of winging along with only the wind noise, the sound of the tires on the road, and the sounds of the world around you is incredibly compelling.” 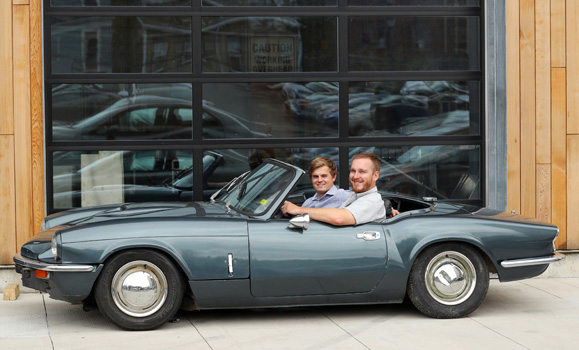