The downtown Sexton Campus has two new street names, both of which celebrate trailblazing individuals in the diverse story of Nova Scotia and Dalhousie University.

The university held a reception on Tuesday (September 10) to commemorate the naming of DaCosta Row and Norma Eddy Lane. The two streets intersect next to the new Emera IDEA Building, and connect the campus to Barrington and Morris Streets.

The streets were previously unnamed, as most of Sexton Campus used a common civic address. But with the construction of the new Emera IDEA Building and Richard Murray Design Buildings, it had become more challenging for visitors and emergency services providers to identify precise locations. 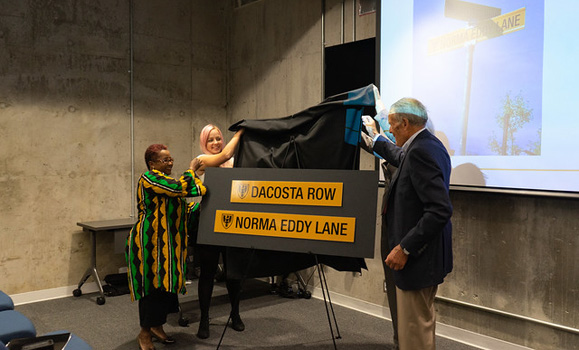 The team in Facilities Management, led by Assistant Director of Capital Planning Nathan Rogers, engaged with various stakeholders and launched a community survey to select new names, with an eye towards showcasing Dal’s continued commitment to equity, diversity and inclusion.

“The requirement for new street names originated out of an operational need, but it’s provided us the opportunity to do something historic,” said Interim President Teri Balser at the reception, calling the new names “quite a milestone for us, and for the Sexton Campus.”

The first of the two new names honours Mathieu DaCosta, considered the first named African in Canada and the beginning of the African-Canadian experience. Speaking a range of languages, he came to Nova Scotia in 1605 as an interpreter with French settlers during the pre-Loyalist period. It is believed that Da Costa spoke a version of ‘pidgin Basque’ that made it possible for communication with the indigenous Mi’kmaq. 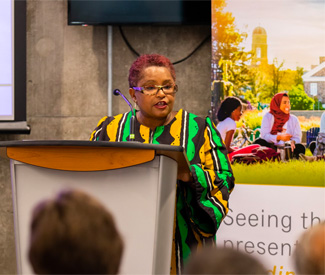 DaCosta’s name was suggested to the university by the committee charged with developing Dalhousie’s African Nova Scotian Strategy. Health and Human Performance faculty member Barb Hamilton-Hinch, speaking as a representative of the committee, said the name speaks to the existence and contributions of People of African Descent to Nova Scotia.

“The history of African Nova Scotia is very significant to the country, province and to Dalhousie University,” said Dr. Hamilton-Hinch, noting the African Nova Scotian community’s recognition as a distinct people by the United Nations.

“We were so pleased and proud that People of African Descent were being recognized on this campus, given the history presented in the report on Lord Dalhousie’s history on slavery and race, completed under the leadership of Dr. Afua Cooper and presented this past week.”

Indeed, among the Lord Dalhousie Panel’s recommendations is a call on the university and the province to name and rename rooms, edifices, streets, pathways, lanes, and parks and gardens in honour of African Canadians, African Nova Scotians and People of African Descent. 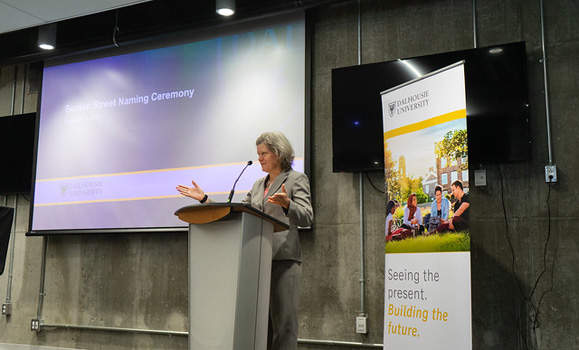 “We are very pleased that the naming of DaCosta Row, while it’s been in the works for a little while now, responds to this recommendation,” said Dr. Balser.

The second new street is named after Norma Ann Marion Eddy, originally from Bathurst, New Brunswick. After graduating from Dalhousie with an Engineering degree in 1956, she completed a Chemical Engineering degree from the Technical College of Nova Scotia in 1958, becoming the college’s first ever female graduate. (The college would later merge with Dalhousie in 1997, creating the Faculties of Engineering, Computer Science and Architecture & Planning.) 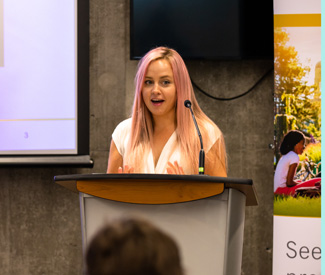 Current student Sara Evely, president of the Dalhousie Women in Engineering society, said experiences like her own are only possible because of “revolutionaries” like Eddy.

“I can only imagine the courage and determination she had to be brave enough to enter a field that was designed to keep her out,” she said. “This dedication will be a symbol of success and resilience.”

Though Norma passed away in 2001, the attendees got a taste of her success and resilience from her husband, Bill Fluhmann, who was in attendance along with their four children to mark the occasion. 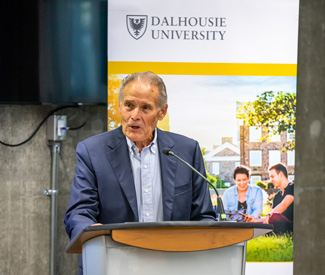 “Norma was so determined,” said Fluhmann, who met his wife when they were paired as lab partners based purely on the order of their last names. “She dreamed about becoming an engineer, and she was not to be dissuaded.” He told stories of their life and careers together after Dalhousie, living and working in Montreal. 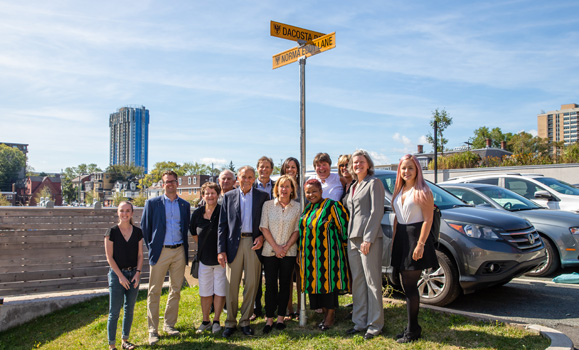 The following are the updated civic addresses for Sexton Campus buildings, which will be shared directly with building occupants: