A spotfin butterfly fish (left) and a seahorse, both spotted off the coast of Nova Scotia. (Lloyd Bond photos)

Lloyd Bond has been diving the waters of Nova Scotia for the last 20 years, often coming across flatfish, lobster and sea urchins that typically populate cooler northern climates.

But in recent years, the recreational diver has been spotting far more exotic species that appear to be drifting north and settling into warmer Atlantic waters.

He has documented everything from tiny seahorses and sleek cornet fish to triggerfish and brightly coloured butterfly fish — all creatures that appear to be moving north on the Gulf Stream. 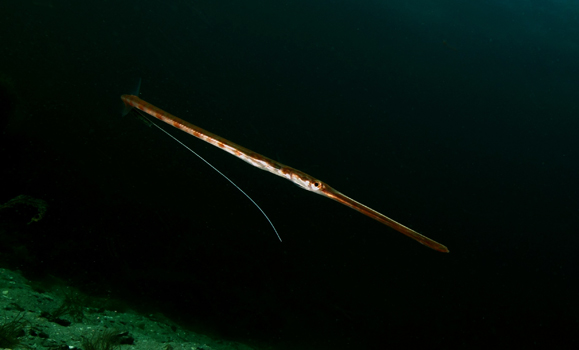 And, what was once a rare occurrence is not so unusual for Bond who routinely sees tropical and subtropical fish in his favourite dive sites after seeing his first one in Nova Scotia about eight years ago.

“It seems that in the last five years, it is more and more regular and some species I find every year,” says Bond, the paint shop supervisor at Dalhousie.

“I caught a triggerfish in Mexico one year and then I saw one here the next year and I was thinking, ’Something’s not right here — I shouldn’t be seeing this here.’”

Boris Worm, a marine biologist at Dalhousie, says tropical and subtropical species have been drifting into local waters for years, but it is becoming more common and that sightings are happening more often.

He often hears from divers who spot the far-flung creatures and has been getting more of the calls in recent years, possibly because more people are in the water looking for them but also because there are now more southern species found in Atlantic waters.

“It is one of the many, many indicators of the ongoing effects of climate change in our waters — it is a symptom, not the disease,” he says.

“It is a phenomenon that has been observed in other temperate regions where you get regular incursions and, in some cases, permanent settlement of these species.”

The tropical species may be lingering longer in northern waters too as the water temperatures stay warmer longer.

A recently published federal government report documented the warming trends for both air and water temperatures. The study, called Canada’s Oceans Now: Atlantic Ecosystems, found there was a 100-year record high water temperature in the northern Gulf of St. Lawrence in the 2012-2016 period.

Sea-surface and deep-water temperatures are warming due to rising air temperatures “driven by climate change and changes in currents,” the report states.

Dr. Worm says the presence of the tropical species is likely not having any discernable effect on the local ecosystem, since most will die when the waters begin to cool in the late summer or fall.

But he says it’s important to keep an eye on any new arrivals and cites invasive lionfish that have moved north from Florida to the Carolinas, where they could prey on certain marine species.

“This shows the importance of the citizen scientist — they are observing our changing environment and documenting what they see,” he says. “These people can play an important role in detecting the effects of climate change in our waters.

“We should build a more organized network to ensure that when these observations are made, they are recorded in an organized manner so we can make sense of them over time and provide an early warning if an invasive species is coming in.”