Scientists are gathering data on a flea-sized, fat-rich organism that could be key to predicting where North Atlantic right whales venture in their search for food in the southern Gulf of St. Lawrence.

A team from Dalhousie University and the University of New Brunswick is taking samples of copepods — a tiny zooplankton that is the primary food source for the massive whales who scoop them up in dense patches.

Hansen Johnson, a PhD candidate in Dalhousie’s Department of Oceanography, says the information could help indicate where the whales may travel as they seek out food and better protect them against their greatest threats: ship strikes and fishing gear entanglements.

Whales on the move

Oceanographers are using both nets and electronic instruments to measure ocean conditions, and the health and abundance of copepods in the area where North Atlantic right whales have been aggregating.

Kimberly Franklin, a combined honours student in Marine Biology and Mathematics, is part of the team in the Gulf that is collecting the samples and trying to learn more about how right whales are using the area. 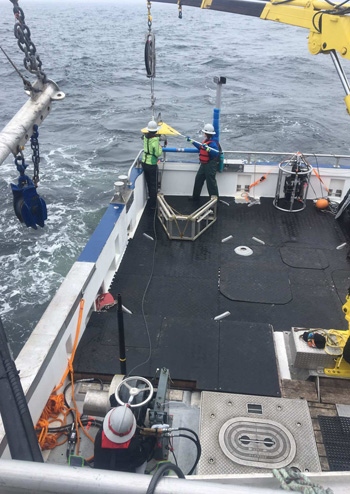 “This can help us determine if the food source is a key motivation factor for the North Atlantic right whales to reside in the Gulf during these summer months, as well as help understand right whales’ distribution in the Gulf,” she said, writing via email from the fishing vessel, Jean-Denis Martin.

Right whales have been turning up in the Gulf in greater numbers in recent years as warming water temperatures may be contributing to a decline in copepod abundance in some of their usual feeding grounds in the Gulf of Maine.

But the endangered whales have been showing up in different areas in the Gulf of St. Lawrence in the last couple of years, making it difficult for government and industry officials to manage the risks associated with fishing and shipping in the region.

Concern for the species

So far this year, eight right whales have been found dead in Canadian waters, while several others have been seen entangled in fishing gear. It’s estimated there are only about 400 of the animals left in the world.

As a result, the federal government has imposed speed reductions on certain vessels and closed certain fisheries in parts of the Gulf.

The whales have been spotted over a large stretch of the southern Gulf, ranging from northern New Brunswick to the Magdalen Island and as far north as the Jacques-Cartier Passage above Anticosti Island. All of the latest sightings data are made publicly available via WhaleMap, developed by Johnson at Dalhousie.

Johnson says they’re also hoping to learn about oceanographic features in an area known as the Orpheline Trough, where currents and topography may help serve up copepods in energy-rich clumps that right whales love to eat.

“The real challenge for right whales is finding and feeding on very, very dense patches of these plankton,” he said, adding that other feeding areas like the Roseway Basin have bowl-like recessions that can collect the plankton.

“But in the southern Gulf we’re not exactly sure which copepod species right whales are targeting, and what about the environment makes it such a good feeding habitat. Figuring this out may allow us not only to better predict when and where right whales show up in the Gulf, but also help us identify other habitats we haven’t found yet.”