For Jack Lynds of North River, N.S., choosing to study at Dal’s Faculty of Agriculture was a no-brainer. The close family ties to Dal AC and close proximity to his family home were just a few of the reasons Jack pursued a diploma in Mechanical Engineering at the Agricultural Campus.

“My mom graduated from NSAC in 1990, and now works as coordinator of the Ruminant Animal Centre on campus,” Jack says. “It’s cool to be following in her footsteps. My little sister is also starting here next year so it is starting to become a family tradition.”

On May 10, Jack will not only cross the convocation stage at Dal AC and receive a diploma in Mechanical Engineering — he will address his peers as class valedictorian, 29 years after his mother, Jean Lynds, did the same.

“I remember reading my mom’s valedictory address and thinking how honoring it would be to be selected by your peers for that role,” says Jac. “Now that I've experienced it, I can report that it is humbling and I am looking forward to the opportunity. I believe it will be a nice way to end such an incredible time here at the AC.”

Jack admits that he was drawn to Dal AC for more than just his family ties. After exploring a few other options during a high school university fair, Jack realized that the reputable university he was looking to study engineering at was right in his own backyard.

“Dal AC appealed to me in many ways,” Jack says. “Often the first thing people note when asked about their time at Dal AC is the small class sizes and more one on one time with professors. Another contributing factor was the opportunities this campus offers for hands on learning. Aside from that, it allowed me the opportunity to stay home for another two years while playing soccer for the Rams.” 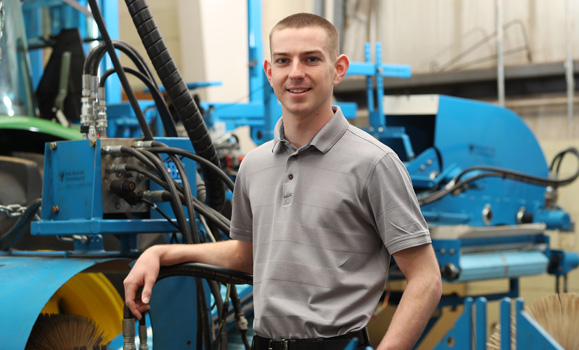 Set to graduate with a diploma in mechanical engineering, it was in high school that Jack realized his passion for science-based courses. With the help of his high school teachers, he became more interested in natural sciences and developed a strong understanding of those subjects.

“I have always enjoyed solving problems, so engineering seemed like a good fit,” Jack explains. “It can be challenging and frustrating at times, but the best part is the rewarding feeling when you complete a project that solves a problem or helps somebody in some way.”

Not only did Jack excel in his academics, he was involved in extracurricular activities at Dal AC. He was a member of the Rams soccer team and also represented Dal AC at both the Atlantic Engineering Competition (AEC) and the Canadian Engineering Competition (CEC). At the CEC, Jack and his three teammates travelled to Ontario to compete in an engineering design competition. The team secured the national championship title for the third year in a row.

“Being involved on campus really enriches the student experience,” Jack explains. “Ten years from now, we may not remember the classes and long nights of studying but we will never forget the friends we made and the memories we made together.”

Upon graduation this spring, Jack is eager to begin the next chapter of his academic career at Dal’s Halifax campuses as he works towards his Bachelor of Engineering degree.

“The transition from Dal AC to the Sexton campus in Halifax should be smooth and I am really looking forward to the opportunities I will have through the co-op program and extracurricular clubs,” Jack says.

As a fan of stock car racing, Jack hopes to tailor his academics that will lead him to a career in the sport.

“My dream job would to become an engineer for a NASCAR team,” he says. “I am really interested in the application of physics to the performance and safety of the sport. I am planning to tailor my courses and work terms to that career and see where it takes me.”