Celebrating the future of performing arts at Dalhousie

Jacob Hemphill (centre) does his best Mick Jagger as a group of Fountain School students and faculty perform "Start Me Up" by the Rolling Stones at the groundbreaking event. (Nick Pearce photos)

A Mozart opera selection. A movement from Chopin. A Rolling Stones classic.

It was an eclectic mix of performances for an eclectic audience: students, staff/faculty and others from the Fountain School of Performing Arts, accompanied by some of the most prominent donors and supporters of the university’s Performing Arts Campaign.

All were gathered on campus Friday morning (April 26) to mark the official groundbreaking ceremony for the campaign’s core initiative: a $38.5M expansion to the Dalhousie Arts Centre. 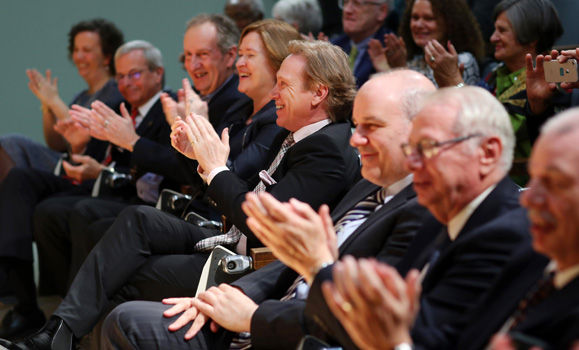 The guests of honour included Fred and Elizabeth Fountain, whose family’s donation fueled the formation of the Fountain School, and who serve as honorary co-chairs of the campaign; the Strug family, in recognition of the late Morris Strug’s gift to create a new concert hall in honour of his late son and Dal alumnus Joseph; Rob Steele, chair of the Performing Arts campaign; and the Province of Nova Scotia, represented by the Honourable Labi Kousoulis, minister of labour and advanced education. All of them have given their time and treasure to helping make the Arts Centre expansion possible.

“We know that everyone in this room has made a difference to this project,” said Fountain School student Sarah Nearing, who co-hosted the formal portion of the event with classmate Danielle Toner. “Without you, we would not be here today.” 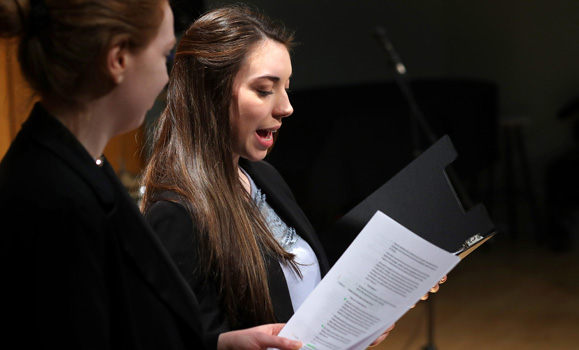 The Performing Arts Campaign is about providing the physical infrastructure to support the enhanced academic experience of Dalhousie’s Fountain School of Performing Arts. It will expand and revitalize the Dalhousie Arts Centre — a venue as important to Atlantic Canada’s arts and culture community and economy as it is to the students who frequent its halls during their time on campus.

The Performing Arts Campaign will see the construction of the Joseph Strug Concert Hall, a state-of-the-art, 300-seat performing and rehearsal venue. “It will truly be a jewel in the crown of Canadian performance spaces,” said Toner.

The campaign will also add innovative practice and rehearsal spaces and new studios for the Costume Studies program, currently hosted in a separate facility from the rest of the Fountain School. And it will complete much-needed renovations to the current Arts Centre, resulting in improved air quality, energy savings, greater accessibility and improved audience experience.

For Jacqueline Warwick, director of the Fountain School, it’s an opportunity to build on the academic and community experience that’s been the school’s focus since its creation. “I feel so incredibly lucky to have landed at an institution and in a community where the performing arts are as valued as they are here,” said Dr. Warwick. “We are able to grow and offer a high standard of education thanks to the support of our wonderful community leaders.”

The community leaders being recognized at Friday’s event began their morning with a special guided tour through the parts of the Arts Centre most people don’t get to see: down into the building’s depths to the props and wood shop, where instructors Melinda Robb and Torin Buzek showed off some of the more elaborate student-led sets and props from recent Fountain School productions like last year’s Frankenstein-inspired Drums and Organs. Then it was up to the Rebecca Cohn Auditorium where Arts Centre Technical Coordinator Colin Richardson discussed recent and future upgrades to lighting, technical and staging gear in the 1000-seat hall.

The celebration continued in the Macaloney room, with remarks from Minister Kousoulis and Interim Dalhousie President Peter MacKinnon.

“It’s important to support the next generation of artists,” said Minister Kousoulis, who was present at Dal last fall when the Government of Nova Scotia announced a $10-million contribution to the Performing Arts Campaign. He thanked the other donors and supporters in the room: “Without all of this support, this project would never have come off the ground.”

President MacKinnon echoed those sentiments: “I’m very impressed by the way the arts community in Halifax has rallied around this cause, whether it be organizations that have lent their support or endorsements from members of the performing arts cabinet.”

Dilshan Weerasinghe plays guitar on "Start Me Up."

Then there were the musical performances, all of which showcased the spectacular talent that makes its way through the Fountain School each and every day.

Julia MacVicar sent vibrato soaring through the rafters performing “Duch Zartlichkeit und Schmeichen” from the Mozart opera Die Entfuhrung aus dem Serail, accompanied by pianist Greg Myra. Caleb Ehler wowed the crowd with his piano chops on Chopin’s Sonata No. 2 in Bb minor, Op. 35, first movement. And an ensemble of players — including Dilshan Weerasinghe, Aidan Zann-Roland, Steven Baur and Jacob Hemphill doing his best Mick Jagger moves — got the audience’s toes tapping with a spirited take on the Stones’ “Start Me Up,” the song’s racy final lyric rewritten to the more setting-appropriate, “You! You! You make our dreams come true.”

Those dreams began to look a lot more like reality with the event’s final milestone: a walk outside to the back terrace of the current Arts Centre, overlooking the piles of dirt where the centre’s expansion will begin construction in the coming weeks and months. With a drumroll and the pull of a curtain, the honoured guests unveiled concept art demonstrating what the expanded Arts Centre will have in store. 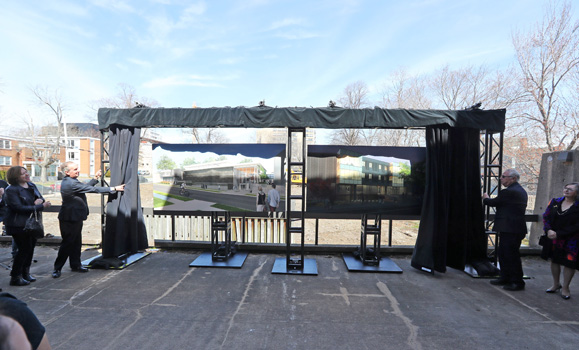 Pulling open the curtain outside the site of the expanded Dalhousie Arts Centre.

For students like Sarah Nearing, it’s a look at an even brighter future for performing arts education in Atlantic Canada.