Susan Spence has many memories of a distinguished middle-distance running career, one in which she ranked as high as 10th in Canada. She pauses to reflect on one such moment during a national cross country final in Halifax: “All I remember is Point Pleasant Park, where the race took place, this beautiful beach, looking at the ocean.”

There were many travels during those competitive years, dedicated training, contacts and friendships made. Collectively, she believes they propelled her toward a successful career in planning and administration. They equipped her with the discipline and focus.

“Athletics can teach a person a sense of commitment, time management, dedication—so many transferrable elements that apply to other areas of your life,” Spence says. “The doors it opens and the people you meet, the influence those people have on one’s life.”

Years later, she would return to that moment of beauty in Halifax, Nova Scotia. She’d spent a decade in Houston, living with her two children and working in senior leadership positions at the University of Texas M. D. Anderson Cancer Center.  With plans to eventually return home to Canada, a move to Halifax, Nova Scotia enabled that, and when the opportunity arose to be associate dean of health systems & policy in the Faculty of Medicine at Dal arose, and she took it.

“From my first visit to Halifax it felt right — the size of the city, what it had to offer, a great place to raise children” she says. “The opportunity to work here at Dal, and to be part of this environment, was very exciting. Not a day goes by I don’t feel gratitude.”

Spence has come a long way from the Ottawa Valley, where her middle-distance running career began in high school. She graduated from Queen’s University with a BA in Health, and from University of Ottawa with a master’s degree in Health Administration.

“I was interested in the science part and the leadership part,” she says. “That MHA at the University of Ottawa is combined with their MBA program, so there were lots of course options in statistics, business practices, which would be applicable to any sector. For me it ended up being a very rich and relevant degree.”

Where her athletics had once equipped her with skills she used in her career, her career has since taken her to cities around the world including London, England for five years, where she’s taken the opportunity to run in marathon events in London, Paris and the Berlin half-marathon — right after the wall came down, where she even received a piece of the wall as a post-race memento she has to this day. A year ago, she ran the New York Marathon, an aspiration set many years ago.

After her time in Dal’s Faculty of Medicine, Spence then moved into the role of associate vice-president academic, and later becoming vice-provost of planning and analytics in 2014. “Every day is different,” she says of her current role.

“The word ‘analytics’ was added to the title to reflect the Dal Analytics team, which is part of my responsibility.” That office is focused on using advanced analysis techniques to ensure that Dalhousie uses evidence-driven decision making from the highest offices down. “It’s about determining how we best serve the university in terms of data-informed evidence. We recently hired a new chief analyst and director who will carry that agenda forward.”

Spence’s overarching focus is on renewing Dal’s strategic priorities. “We’re ending our cycle for the university in terms of our strategic priories,” she says. “There’s a lot of background work going on right now. We’re evaluating our current strategic priority projects and it will really take shape when we have our new president in place.”

The job involves both facilitation — providing frameworks for Dal’s senior leadership team and other key stakeholders so that they can develop their department’s strategic plans — and project management which focusses on projects that have University-wide impact. She served as the lead negotiator in the 2012 merger with the Nova Scotia Agricultural College, which became Dal’s Faculty of Agriculture.

She also chairs a committee that works with all faculties and facilities management staff to improve classroom space. “This is the continuation of creating modern and effective learning spaces, which is really important for me. The new Provost, Teri Balser, has tremendous experience in the teaching arena.” Spence’s role is marrying that academic perspective with information technology and facilities management perspectives.

Whether working as a facilitator, drafting policy and plans or directly managing a project, Spence says the goal is always the success of others, and Dal as a whole. “It’s an enabling role,” she says. “My job is make sure I understand all the important issues, people’s challenges and goals, and how they relate to Dal’s mission.” From there, her job is finding ways people can work together to solve mutual challenges.

And once again, she finds herself drawing on her background in health care. “Working for years in health care, in England, Western Canada, the United States, learning how you deal with complex problems, has served me very well.” 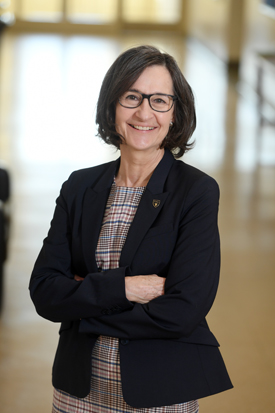 On the importance of diversity…

“I think about this a lot: the whole diversity and inclusiveness agenda is really important to me as a leader. How can I contribute to that agenda with respect to recruitment, and instilling inclusiveness and equity (as values) with my team?"

“I’ve always had the attitude that as a leader and administrator, the role is truly to serve, enabling things to happen.”

On leading from behind…

“I’m fairly understated, but I’m comfortable in the background making things happen. That’s where I get satisfaction. And I think that’s helpful in a planning role, because it’s about assisting others, being a critical thinker and problem solver.”

Certainly running and other physical activities, but put me in a garden and I couldn’t be happier.

Etta James. Her voice, her passion, her music. She’d be with me.

I think architecture would be fascinating, maybe landscape architecture, to get that gardening passion in there.

The best advice came by way of a question: what are you afraid of? Just before grad school. I’ve often thought of that question; dissecting it makes you fearless.

Florence Nightingale. When I worked in England at St. Thomas’ Hospital that’s where she started up the first nursing school. During the Crimean War, she was an incredible leader. To be able to talk with her about her inspirations, how she tackled immense challenges — that would be a grand evening.