5 Days: An ambitious challenge goes bigger than ever

All this week, passers-by outside the Rowe Building will see Commerce students around the clock with sleeping bags and bright orange shirts.

They’re participating in a campaign called 5 Days, collecting donations for Phoenix Youth Programs, a non-profit Halifax organization that serves youth between the ages of 11 and 24, many of whom are experiencing or at risk of homelessness.

Julia Penney, VP external of the Dalhousie Commerce Society and this year’s organizer, has been looking forward to this year. She helped organize last year’s 5 Days campaign, but on the night she was scheduled to sleep outside, a storm made it too dangerous to do so. This year, she’s participating for all five nights, and she’s excited to continue building on the success of previous years.

“It’s exciting to see how big it is already,” she says. The campaign officially started Sunday afternoon, and the students are already over a quarter of the way to their goal. This is the sixth year that Dalhousie has participated, raising over $65,000 since it began. This year, Julia and the Commerce Society hope to add $25,000 more.

Building on the legacy

The Dalhousie Commerce students are the only Atlantic Canadian team taking part in the national 5 Days campaign. During the campaign, students must attend classes and extracurricular activities as they normally would, but otherwise you’ll see them outside the Rowe building, collecting donations and having conversations with people about Phoenix. All of their meals must be donated by supporters, with anything left over donated to Phoenix, along with the money they raise. 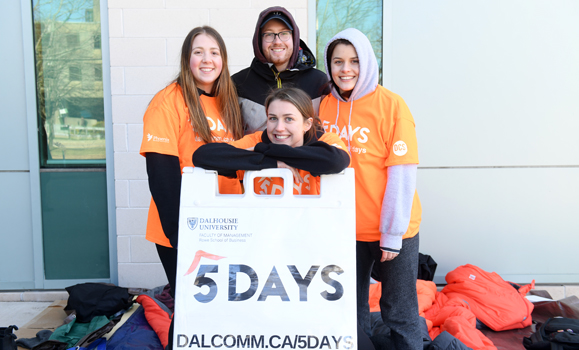 “We aren’t sleeping outside to try and simulate what it’s like to be homeless or pretend that we are homeless,” says Julia. “We know that Friday night we’ll be back home sleeping in our warm beds. For youth who are under-supported, the issue stretches so much further than not having a bed, it stretches to a support system and security. We just want to bring attention to this issue of under-supported youth in our community. This is a visual way to do that.”

Julia and the Commerce Society plan to make it bigger than ever this year. There are 20 Commerce students signed up to participate. Julia and Commerce Society President Donald Eastop will sleep outside every night of the challenge, while others will join as guest sleepers for a night. Julia hopes that having more students involved will mean a bigger network, more awareness and more donations.

They are also planning fundraising events to complement the challenge. A comedy night kicked off the festivities last week, and they'll celebrate the end of 5 Days with a karaoke night at the Grawood Pub on March 29.

Even if visitors can’t spare that much, Julia hopes they’ll stop by to chat. “I’m looking forward to sharing with more people what Phoenix does. They’re a part of our neighbourhood, just down the road, but we don’t always think about it. Youth homelessness can be hard to talk about, but we’re putting it in bright orange, in front of one of the busiest buildings on campus. We want to continue the conversation.”

You can support the campaign by donating to the students outside the Rowe building or online through the Dalhousie team’s website. Check the Dalhousie Commerce Society’s Facebook page for full details on their fundraising events happening March 29. 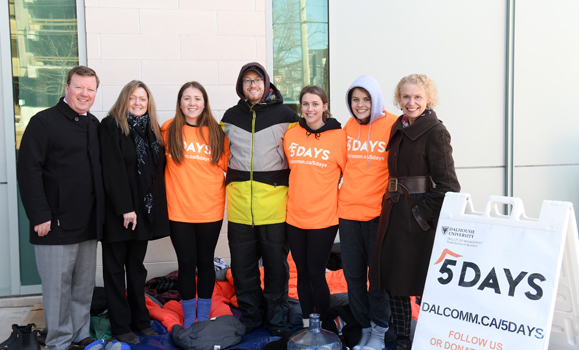