When Donna Bourne-Tyson was appointed Dalhousie’s University Librarian in 2011, it was a homecoming of sorts.

Originally from North Bay, Ontario, Donna obtained her Master of Library and Information Studies (MLIS) from Dalhousie in 1990. She spent a number of years working in Nova Scotia in the early nineties, and then again before coming to Dalhousie as university librarian (including a six-year stint in the same role at the Mount).

“When I was first taking my MLIS, way back in 1988–90, I wanted to go into systems analysis, information management, or database design, not librarianship,” says Donna. “I was very taken the writing of Vannevar Bush, who in his prescient 1945 Atlantic article “As We May Think” predicted hypertext, the internet, the World Wide Web and the information age.”

It was after graduating, while working in a library in rural Nova Scotia that her mind changed. “My inspiring and somewhat didactic Swedish manager proselytized about the value of libraries and she was the reason I now say that libraries are the cornerstone of democracy. Libraries provide equal access to information, both online and in the stacks. Informed citizens are essential in a healthy democracy.”

Under Donna’s leadership, the Dal Libraries are embodying a commitment to equitable access through their Indigenous initiatives. In the past year, the Libraries have opened a Gord Downie & Chanie Wenjack Legacy Space in the Killam Library, a hub of the National Centre for Truth and Reconciliation at the MacRae Library on the Agricultural Campus, and hired an Indigenous Services Librarian.

“As recently reported by CBC, some Indigenous leaders think reconciliation might not be the right term for this work, because reconciliation implies a return to a previous, harmonious state. Restitution, reparation, restoration — these may all be more accurate terms, but the Indigenous community should lead that conversation and choose the terminology. Wherever the Indigenous community would like to take these initiatives and however it will be described, we will walk beside them,” says Donna.

Donna began her second term as Dal’s University Librarian in 2016, after five years filled with impressive accomplishments. These included increased collaboration between the Dal Libraries and their partners across the university and the community, and growth in numerous areas including eLearning, information governance, student success, open access, records management, and research data management.

This new growth meant a lot of change for those working in the Dal Libraries, including a significant reorganization. “At one point, in some of our position postings, we included ‘a high tolerance for ambiguity’ as a desired skill. Achieving a state of equanimity in the face of constant change is a valuable skill and if you can achieve that, you will thrive during times of change,” says Donna.

And libraries are always changing, despite the tired association of card catalogues and rows of stacks that many non-library users often visualize when they hear the word “library.”

“Students are using library spaces more than ever because we’re doing a better job of designing library spaces for people and not just for books. Our newer spaces are architecturally inspiring, light-filled, and vibrant to meet the growing demand for student study and collaborative learning space. On the other hand, some of our ‘spaces’ are completely online. It’s an exciting time in library space design.”

An emerging area of librarianship that interests Donna is digital literacy, including data literacy and algorithmic literacy, and the use of information in the age of artificial intelligence.

“This is a completely new frontier. While it’s been predicted for several decades now, the data deluge and the potential for big data and various algorithms to be used to analyze and then reshape society is coming quickly. It’s both exhilarating and slightly terrifying, and it’s more important than ever for students and lifelong learners to be effective users, scholars, and stewards of information. Libraries will be there to help people be engaged and responsible digital citizens in this new reality.”

Now that Donna has spent her career as a librarian, she wouldn’t have it any other way. “But in a parallel universe, I am bottle-feeding orphaned baby elephants in the nursery at the David Sheldrick Wildlife Trust in Kenya, working as an environmental activist, or possibly being a crazy cat lady.” 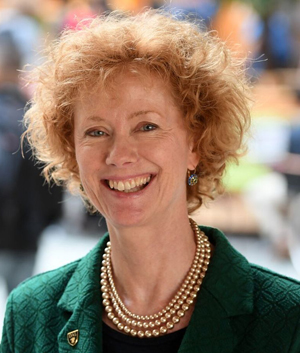 “Researchers have predicted that the average millennial will have about eight different careers throughout their lifetime. Lifelong learning is essential for professional and personal growth and development. Learning how to learn is as important as mastering any specific discipline in a university. We see this all the time with the learning requirements for our library team, and lifelong learning is critical to working in this environment. It’s challenging to be in a constantly evolving environment but it’s also thrilling to always be learning new things.”

“Libraries have been collaborating for decades as a way to provide the best value to our users through synergies and critical mass. It’s an excellent way to learn and bring out the best in each other and to raise all the boats in the Atlantic region.”

“The mandate of academic libraries is expanding to mirror some aspects of public library values. We have always had a strong mandate to support students, faculty, and staff, and now we have a mandate to engage and support the community. This is a bidirectional dialogue that informs what we do and enriches the services that we offer. We’re redoubling our efforts to ensure our spaces are welcoming and open to all.”

Sea kayaking, canoeing, and yoga. And of course reading!

I wouldn’t change the career I’ve had because I’ve loved every minute of it and I feel the work is of benefit to the greater community.

A colleague at the Mount used to advise that we consider the Socratic filter ‘Is it true, is it necessary, is it kind?,’ and also the aphorism about no one knowing what others are dealing with internally; assume the best intentions until there is evidence to the contrary.br>

There have been too many mentors and leaders who have inspired me to single out; in fact, I learn something from everyone I work with and am often inspired by my colleagues, and also by quite a few fictional characters as well!