The SeaLeon as discovered on the Irish coast. (Provided photos)

Four months ago all seemed lost, literally, for the Dalhousie SeaLeon. But last week, the tiny sailboat washed ashore off the coast of western Ireland, approximately 250 nautical miles of its original destination.

A team of researchers in the Faculty of Engineering deployed the 1.8 metre vessel out to sea last summer as part of the Microtransat Challenge — a unique transatlantic race that challenges participants to design and build an autonomous sailboat capable of crossing the Atlantic Ocean.

The SeaLeon, named after the Faculty’s former dean, Josh Leon, launched off the coast of Cape Breton in late July. Researchers predicted it would take 100 days for the sailboat to complete its journey across the ocean to Brest, France.

“After the first month, the SeaLeon was behaving very well,” says Faculty of Engineering professor Jean-Francois Bousquet. “It was staying on course, and powering through the different weather conditions. We could monitor its route and although she did make a few detours, she usually got back on track.”

Then, on October 22, 76 days into its journey, the vessel stopped transmitting data and disappeared.

“There was still the odd chance that it would reach Europe, but to be honest, I didn’t think we would ever see her again,” says Bousquet.

To everyone’s surprise, last week, the SeaLeon made landfall.

“It got washed up on a beach in Castletownbere which is on the south-western coast of Ireland,” says Bousquet. “A family of tourists emailed us to let us know. We had written our contact email and phone on the SeaLeon, with instructions to contact us if they found it.”

Bousquet says strong winds quickly washed the boat back out to sea before the family had a chance to pick it up. A local fisherman later ventured out to retrieve the vessel and then stored it in his boathouse.

“Although we haven’t been able to see the SeaLeon ourselves, the O’Regan family sent us some pictures of the sailboat. The mechanisms, rigging and hull all look like they are in pretty good shape, although it is covered in fowl,” says Bousquet. “Of course, the sail has been mainly torn to shreds.” 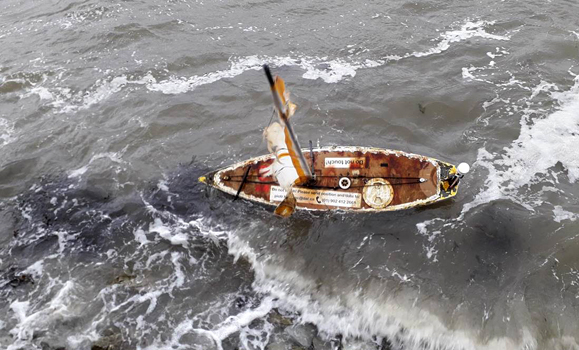 Bousquet says the team is planning to travel to Ireland in May to retrieve their sailboat. From there they’ll have a chance to better examine the vessel’s sensors and motors.

“We may also be able to download some data from the radio and micro-controller memory to figure out which path the boat took,” he says. “The fact that we were able to retrieve her only 250 knots from our intended destination is amazing, given the size of the ocean.”

Sailing into the future

This year’s journey marked Dalhousie’s second entry in the Microtransat Challenge since 2015. To date, no competitor in the autonomous wind-power class has ever reached the finish line, though Dalhousie has done impressively well each time.

Plans are already underway to construct a new vessel. The project will be partially funded by the Ocean Frontier Institute, and Bousquet says some major changes are on the way.

“We want to power the vessel with solar energy,” he says “The SeaLeon was powered with 120 D-cell batteries, and we knew that when we run out of battery, the electronics would no longer respond. We also want to equip the new vessel with an automatic identification system (AIS) receiver, so that we can monitor the ships and buoys in the area.”

Bousquet says his team is planning to launch the sailboat in the 2021 Microtransat challenge, and as they like to say, hope that the third time is a charm.