It can be a long, lonely journey across the Atlantic Ocean — even if your sailboat has no sailor!

A team from the Dalhousie Faculty of Engineering has once again launched a vessel for the Microtransat Challenge — a unique transatlantic race that challenges participants to design and build an autonomous sailboat capable of crossing the Atlantic. It’s Dalhousie’s first entrant in the contest since 2015.

Making such a journey is small task, and it’s made even more challenging by the stipulations of the race: vessels must propel themselves using only wind power and cannot exceed 2.4 metres in length. Vessels must also be able to travel 50 nautical miles, autonomously, from their launch point to the starting line of the race. As of last year, no competitor in the autonomous wind-power class had ever even reached the starting line!

Undaunted, Dalhousie’s team of faculty, staff, and students have set out to become the first team to complete the challenge. They’ve prepared a new entrant for the 2018 race: the SeaLeon, named in honour of outgoing Dean Dr. Josh Leon.

On July 31, the SeaLeon set sail on its maiden voyage, hoping to complete the 3,500+ km journey from Nova Scotia to France.

When Dalhousie first became involved in the Microtransat Challenge in 2015, the project was led by Dr. Leon. Following his departure, the remaining members of the team decided the project should continue as a student-run initiative.

In recent years, Dalhousie students Graham Muirhead, Matt Gauthier, Thomas Gwynne-Timothy, Andrew Dobbin and Julia Sarty have all played lead roles in the Microtransat project. This year, Anthony Chalmers has stepped into the role of student captain, supported by an NSERC Undergraduate Research Award for the study of underwater communications.

“Dr. [Jean-Francois] Bousquet asked me to get involved in the project, since the team was having difficulties debugging many electrical issues,” says Anthony. “Starting in the fall, I’ll also be managing the team, in addition to helping design the vessel’s electrical systems.”

The student leaders are joined by an interdisciplinary team of Dalhousie staff and faculty. Mechanical design of the SeaLeon is a joint effort between Senior Instructor Robert Warner, faculty engineer Piotr Kawalec and former student captain Graham Muirhead, who was hired as a research engineer upon completing his degree.

Dr. Bousquet supervises the student-led design of the ship’s autonomous control systems. Autonomous control is never an easy operation, and  is made all the more difficult by the need to respond dynamically to the shifting conditions of wind and waves at sea.

“The boat’s code is very complex,” Anthony says, “so much so that it took me many hours just to become familiar enough with the code to start adding to it myself!”

Collaboration and communication between the two teams, and the systems they are responsible for, is crucial to the success of the project. Indeed, one of the biggest challenges of the project isn’t the design of any one particular system, but rather the prerogative to have the systems operate effectively in unison.

Throughout the project’s history, Dalhousie has also been supported by various partner organizations. In 2015 Dalhousie entered the Breizh Tigresse, a collaborative build designed in concert with ENSTA Bretagne. This year, support for the launch was provided by Prof. Bruce Hatcher, director of the Bras D’or Institute at Cape Breton University. Michele Stevens Sail Loft donated the SeaLeon’s sails.

Xeos Technologies made invaluable donations to the telemetry of the SeaLeon, supplying hardware and technical support for the vessel and providing the GPS tracking services and satellite communication that allows the SeaLeon’s progress to be monitored remotely.

“The team is indebted to Xeos,” says Robert Warner, “and it’s no exaggeration to say that the project would not be possible without their assistance!”

High hopes on the high seas

Dalhousie’s original performance in the Microtransat Challenge was impressive. In 2015, the Breizhe Tigresse set a record for longest distance traveled under autonomous control, covering 600km before deviating from its course and sailing a further 800km. The Breizhe Tigresse fell short of the “longest time at sea” record only because another entrant managed to drift in circles for 2000km. 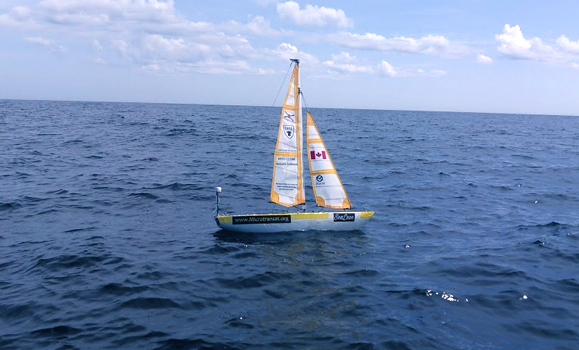 While the SeaLeon was late to embark this year, the team is optimistic about its potential. Since launching off the coast of Cape Breton on July 31, the SeaLeon has already traveled more than 500km. As of press time, it is still going, currently about 300km southeast of St. John's, Newfoundland. If all goes according to plan, the SeaLeon should complete its journey in 100 days.

However, there are many challenges for the SeaLeon to face. There is the risk of glitches in the operation or interactions of the ship’s onboard systems. There are the fleets of shipping and fishing vessels operating in the Atlantic Ocean — any one of which could make short work of the SeaLeon should their paths cross.

Perhaps the biggest risk comes from the weather: the SeaLeon’s late launch means that it will be on the open ocean just in time for hurricane season. With two Atlantic hurricanes having already come and gone this season, the weather forecasts will surely be keeping the team up at night.

Dangers aside, the team remains optimistic that the SeaLeon will beat the Breizh Tigresse’s record — and, just maybe, become the first entrant in the wind-powered autonomous category to complete the Microtransat Challenge.

“There are a lot of contingencies with this voyage,” says Anthony, “but if we’re able to avoid the many hazards out there, I’m very confident that the SeaLeon could successfully navigate to France!”