From the Archives: Meet the maintenance employee who walked students to the stage across two decades

Jim Stoker leads a Convocation procession out of the Henry Hicks Building and down the quad. (Dalhousie Archives photos)

From the Archives highlights the stories behind some of the unique and interesting artifacts, memorabilia, letters and other items of note stored inside the University Archives.

As we celebrate these very special 200th anniversary convocations this week, it seems appropriate to remember a member of the Dalhousie family: James Stoker, who led many a convocation procession as the university’s official macebearer during the 1960s and 1970s.

James — Jim, for short — is just one of the countless number of Dal employees who have served this university with dedication and distinction for careers of more than 40 years. He began his Dal career in 1932 working for his uncle, who was in charge of maintenance for all the buildings on campus. Jim worked the grounds and cut the vast expanses of grass with a hand mower until a vacancy in Sherriff Hall for a chef’s assistance became available.

Even without any formal training in cooking, he was suddenly thrust into the head chef’s position for a brief time when the incumbent suddenly took seriously ill and died. Upon the hiring of a new chef, Jim became caretaker of the women’s residence, followed by Chemistry Building and the men’s residence in the Arts Annex, which had been erected by the government during World War II on the site of the old gymnasium that burned down in the early 1930s.

A home in the Hicks Building

To say that Jim took his work home with him would be an understatement — he literally lived at the the Arts and Administration Building, now the Henry Hicks Building.

In 1951, when the building opened, Jim was its supervisor, and he and his wife Margaret, another long-time Dal staff member, were provided with “a neat little apartment in the north-west corner, then facing a copse of birch and maple.”  From this location, Jim performed his many duties including opening doors and offices and delivering papers and early mail.

Later, the Stokers add a new member to their household: a sturdy little English pug named Hardy. As duty bound as his owners, Hardy could be seen patrolling the A&A building following Mrs. Stoker as she delivered stationery and mail; on other errands the Stokers did around Studley campus; and scrutinizing every visitor entering the south doors of the A & A building. One of Hardy’s proudest claims is that he was the first holder of a Dalhousie identification card, complete with his photograph and name on it.

In 1961, as a familiar face on-campus for nearly 30 years, Jim was selected to serve as Dal’s macebearer. From that point through until his retirement in 1972, he led every convocation procession and other ceremonial occasions on campus. The four and a half feet long mace, designed by Dr. Richard Saunders (former head of the Department of Anatomy), is carved in oak and adorned with silver and enamel, meant to symbolize “the Maritime tradition of the seagirt provinces and the historical heritage of the university that serves them.”

A highlight of Jim’s tenure as macebearer was being presented to Her Majesty, Queen Elizabeth, the Queen Mother, by President Henry Hicks at a special convocation ceremony during her visit for the opening of the Sir Charles Tupper Medical Building.  From reports at the time, the whole parade was held up while the Queen Mother chatted with him.

It was appropriate that Jim’s final task as a Dal employee was to carry the mace in the Spring convocations of 1972.  Well-known to all students on the Studley campus, Jim was presented with a silver “D” upon his retirement and a formal tea was hosted by the President’s Office to recognize and thank him for his almost 41 years of service to Dalhousie. 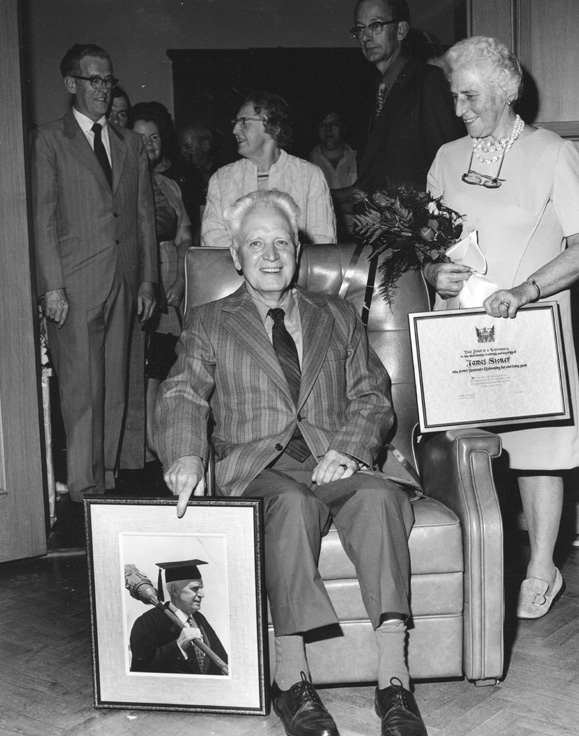 And his legacy lives on today: Dal Facilities Management has three Stoker Awards to celebrate outstanding achievement in support of the university community — one for Appreciation, one for Innovation and one for Safety. This year's Stoker Awards will be presented as part of the Dalhousie Legacy Awards on June 20.