As the clock ticks down to the July 1 deadline when recreational marijuana will be legalized in Canada, governments are scrambling and the controversy is mounting among those who want a say in how it will be grown, sold and regulated.

Meanwhile, tens of thousands of Canadians — people who are living with chronic pain — are wondering when their needs will be met. They are desperate for safe and effective pain treatments that will not turn them into drug addicts.

Pain specialists and scientists at Dalhousie Medical School are on the brink of answering that call. They’ve launched a company, Panag Pharma Inc., through which they’re developing a list of non-addictive pain-relieving products containing cannabinoids and similar compounds found in cannabis and other plants.

The first of these products is a topical analgesic cream that targets aches and pains in muscles and joints close to the surface, making it ideal for such common afflictions as osteoarthritis. 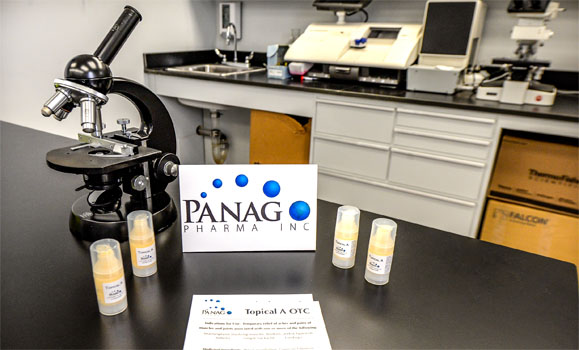 “Topical creams are safer than oral medications and can target pain without the side effects of non-steroidal anti-inflammatories or other medications given systemically,” notes pain specialist and professor Dr. Mary Lynch, president of Panag Pharma and director of research at the QEII Pain Management Clinic.

Known simply as Topical A OTC at this stage, the cream uses cannabinoids derived from clover and cloves — rather than cannabis — to target pathways involved in inflammation and pain. It also uses capsaicin — the compound that gives that spicy zing to chili peppers — to target other pain pathways.

“Because none of the ingredients is a controlled substance, people will be able to use the cream without a prescription,” says Panag’s chief scientific officer, Dr. Melanie Kelly, a professor in the departments of Pharmacology and Ophthalmology & Visual Sciences who’s been studying cannabinoids and their receptors for more than 20 years. “Health Canada has approved it to be sold over the counter as a natural product; we hope to see it on the market in 2018.”

Topical A OTC is currently being tested in a randomized, controlled clinical trial at the Nova Scotia Health Authority. The trial, led by anesthesiologist and assistant professor, Dr. Karim Mukhida, will test the cream’s ability to relieve pain in patients with osteoarthritis of the knee.

A referral is not needed to join the trial; patients who want to learn more can contact Joan Falkenham (joan.falkenham@nshealth.ca, 902-473-1157).

Just a few years ago, the evidence supporting cannabinoid products for pain relief in humans was mostly anecdotal.

“It depends on who you ask,” remarks Dr. Lynch, who’s been interested in cannabinoid research for two decades — since patients began telling her that cannabis was giving them relief from chronic pain, without the side effects and addictive qualities of many pharmaceutical treatments they had tried.

“I always listen to my patients… they are my teachers,” she says. “I wasn't skeptical — there was a growing body of evidence in the literature. Cannabinoids were proving profoundly analgesic in animal models of acute and especially chronic pain, both neuropathic and inflammatory.”

Dr. Lynch wanted to learn more about the potential benefits for people, but there were relatively few clinical trials underway at the time because cannabis was (and still is) a controlled substance.

Despite the regulatory challenges, Drs. Lynch and Kelly and other Dalhousie researchers began exploring how cannabinoids do the job. Among this dedicated group were Dr. Orlando Hung, an anesthesiologist with a bent for inventing new drug delivery methods, and Dr. Christian Lehmann, an anesthesiologist with a particular interest in pre-clinical models of inflammation. They co-founded Panag Pharma Inc. with Drs. Lynch and Kelly and together they incorporated the company in January 2014.

The science behind cannabinoids and pain

THC, the cannabinoid that makes people high, is just one component of the cannabis plant. 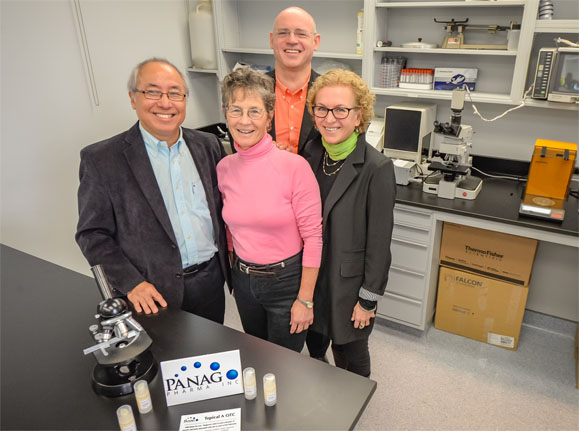 “The cannabis plant has 600 active compounds, each with different effects,” explains Dr. Kelly. “Based on our years of research, we’ve developed cannabinoid formulations that don’t contain THC, so people can use them for their beneficial effects without experiencing a psychoactive high.”

THC was isolated in 1964 by Israeli chemist Dr. Raphi Mechoulam. A longtime mentor to Dr. Lynch and her colleagues — and now an advisor to Panag Pharma — he has been on the forefront of medical marijuana research for more than 50 years. In fact, they adopted the name Panag Pharma for their company because “panag” is an ancient Hebrew word for cannabis.

As Dr. Lynch knows from talking to her patients, most people who are in pain don’t want the psychotropic effects of THC — they just want to function normally, without pain.

One of the non-THC compounds the researchers have studied intensely triggers cannabinoid 2 (CB2) receptors, the non-psychoactive endocannabinoid receptor found in the immune system.

“If we can activate endocannabinoid receptors in the immune system, we are not just alleviating pain, but reducing inflammation,” Dr. Kelly explains. “This could offer long term relief by stopping the self-perpetuating cycle of inflammation and pain.”

This is the compound the researchers have included in Panag’s over-the-counter topical pain cream. They’re utilizing its anti-inflammatory properties in another product (patent pending) for treating interstitial cystitis, a painful condition of the bladder.

Panag’s researchers are also developing topical medications that target painful eye diseases. One of their patented medications contains a synthetic cannabinoid that activates another internal cannabinoid receptor to treat inflammation of the front of the eye. At the same time, they’re developing an eye treatment using the non-addictive phytocannabinoid known as CBD (cannabidiol), to help people suffering from conditions such as dry eye.

A changing and challenging reality

The fact that many of Panag’s products contain synthetic cannabinoids, and cannabinoids derived from such plants as cloves and clover, does not mean the researchers are turning their backs on cannabinoids from the cannabis plant.

“Cannabinoids from the cannabis plant might provoke stronger reactions,” Dr. Lynch reasons. “We are always looking for different combinations, new forms of delivery, the most efficient and effective way to provide long-lasting pain relief.”

But don't get the wrong idea: there is no cannabis growing in the Dalhousie lab! The isolated active agents are bought from suppliers around the world and put into carefully calibrated formulations for controlled dosing with predictable effects.

And even though recreational marijuana will soon be legal in Canada, research for medical use of the plant is not getting any easier.

“Cannabinoids used in medical products require extra research and very high security for storage,” notes Dr. Lynch. “We will have to go through the same regulatory steps and expect the same frustrating delays getting the supply we need to pursue the research.”

“We don't know how Bill C-45 will change research,” Dr. Kelly adds. “But we have to hold the course. We have good research at the pre-clinical level, and we have to follow through with the clinical research to provide the evidence.”

In the meantime, thousands of people in pain continue to buy cannabis from dispensaries who bear no responsibility for proving the benefit of their product.

By pressing ahead with well-researched, precisely formulated and targeted products, Panag Pharma aims to offer safe, reliable and effective alternatives for a range of painful and inflammatory conditions — free of unwanted side effects.