Signs of Dalhousie’s forthcoming 200th anniversary are, literally, blowing in the wind. The Dal 200 banner series, which can be found on lamp posts across campus (and was recently featured on the MacDonald Bridge), profiles exceptional Dal students from all of the university’s Faculties. In the weeks leading up to 2018, we’ll be sharing short Q&As with some of the featured students. 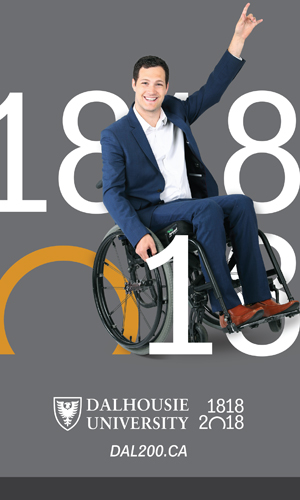 Tell us a bit about yourself

I am from Nova Scotia and am surrounded by great friends and a wonderful family. I am married, my wife works at the IWK in dialysis. Together we have a pug named Fitzgerald. I have a history of being active in student government, but am focusing on my studies this year. With that being said, I try to say yes to most things which has still kept me quite involved in my school and local communities.

Career ambition?
I intend to write the bar and become a practicing lawyer after graduation.

What brought you to Dalhousie?
I came to Dalhousie for law school because we have a strong law program and great scholarship opportunities.

What do you think of your banner? Have you gotten any fun reactions to it?
I think that my banner is great! I have had friends send me emails about seeing the banner on the bridge, and pictures that they took of the banner on campus. I think that there is value for people with disabilities to see themselves reflected in the media and in public and I am happy to be a part of that. 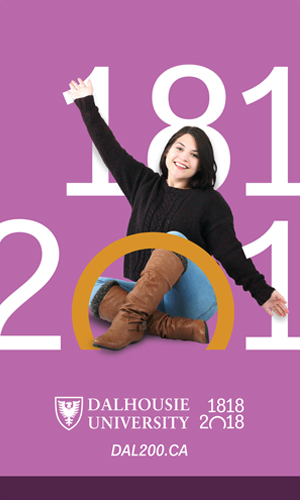 Tell us a bit about yourself

Some of my activities on campus have been working with the International Office on variety of things such as International Development Week and the ATTSVE Ethiopian project, as well as the Truro Campus’ Open House this year. My volunteer work includes tree planting for the Cape Breton Highlands National Park’s “Bring Back or Boreal Project,” wildlife rescues with Hope for Wildlife and working with endangered Blanding’s turtles in Kejimkujik National Park.

Career ambition?
One day I hope to be an Ethnobotanist, which is someone who studies the cultural and traditional knowledge concerning the physical properties of plants, such as their medicinal properties. I want to eventually specialize in natural medicines, with a specialty in skin care. Owning my own business is a dream of mine where I could make remedies and be able to share them with the world.

What brought you to Dalhousie?
The reason why I choose Dal is because it was an opportunity I couldn't resist! I was approached to join the Aboriginal Health Initiative Program and it was such a great opportunity I went with it! But another big reason for choosing Dal is because I have grown up around Dalhousie since I was a young girl. My mother is a professor in Social Work and before teaching she was a student, like I, roaming the hallways of Dalhousie.

What’s the best class you’ve taken at Dalhousie and why?
Next semester I am enrolled in the Horticultural Therapy class taught by Dr. Abbey that I am very excited for. This class is the most similar class we have at the AC to what I would like to specialize in, so I have a high interest in the material. I believe this will be my favorite class and cannot wait to start!

What do you think of your banner? Have you gotten any fun reactions to it?
I think it was fun! I loved seeing the end results! Everyone's turned out great. Unfortunately since I am at the Truro campus, my classmates do not see the banners yet unless they are in Halifax so I haven't had anyone say anything about them. (Editor’s note: Dal 200 banners are scheduled to be installed on the Ag Campus early in the new year.) My mother saw it however and loved it! She was very proud and happy to see me on the banner.

What does it mean to you for Dalhousie to celebrate its 200th anniversary?
My mother has been working at Dal for several years and I have been here for five. I have grown up watching my mother go in and out of the Dalhousie buildings, followed her down the hallways and from a young age was able to see the classrooms. Dalhousie has always been a part of me and to think I am one student, my mother is one professor, we are two of many who have also walked these halls and made it a part of their lives for the past 200 years is amazing!

Read more about Cheyenne: A passion for culture (June 2017)