Dal.ca Home
Home
News & Events
May 2017
04
Activism on the airwaves

Activism on the airwaves

Hailing from Johannesburg, South Africa, Ntombi Nkiwane grew up in a country emerging from the shadow of apartheid. Inspired by the struggle of black South Africans to achieve freedom from racial oppression, Ntombi became a passionate advocate for social justice.

“A lot of my family members were very active in the anti-apartheid struggle, so seeing what they went through and the sacrifices they made drives me,” Ntombi says.

When she crossed the ocean for her post-secondary education, Ntombi brought along her commitment to serving marginalized members of society. Now a fourth-year Management student with a minor in Political Science, Ntombi has backed up that commitment with action since the moment she arrived on campus. And in the past year, she has – quite literally – discovered a new way to amplify her voice. 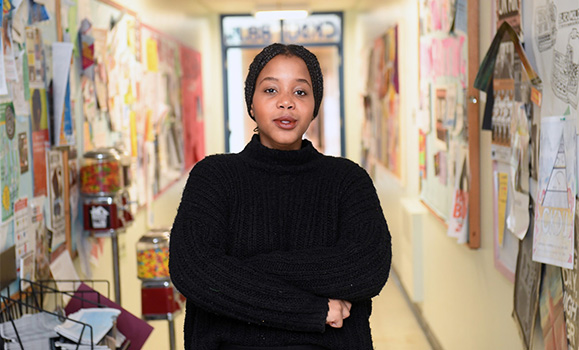 Alongside former Halifax poet laureate El Jones and Todd McCallum, an assistant professor in Dal’s Department of History, Ntombi is the co-host of the radio show Black Power Hour. Airing on CKDU, the community radio station that broadcasts from the Dalhousie campus, Black Power Hour is the only radio show in Eastern Canada to deliver content targeted to incarcerated persons, particularly inmates of African descent.

The concept for the show was initially pitched by “Ed,” a pseudonymous inmate incarcerated at a prison in Nova Scotia.

“Ed spoke to El about the fact that there’s a lack of culturally-appropriate content in the prisons of Nova Scotia, so it would be great if we could start a show that specifically features Black content, political content, as they listen to the radio,” Ntombi explains. “El phoned me up and asked if I wanted to be a part of it”

Airing from 1:30-3 p.m. every Friday, Black Power Hour blends programmed content such as guest speakers and topical discussions with requests from listeners. It is produced by filmmaker and spoken-word artist Reed “iZrEAL” Jones.

The format gives incarcerated persons the opportunity to make musical choices and even share some of their own art.

“The show aims to be a platform for art as a tool of resistance. We incorporate a lot of spoken word into the content and the people who phone in will do poetry or request music that’s relevant to them or their current situation.”

El, a PhD candidate and former instructor in Dal’s English department and current Chair of Women’s Studies at Mount Saint Vincent University, acknowledges that providing a platform for people who have committed crimes may be an unpopular idea in some circles. But convincing skeptics isn’t the program’s core mission.

“We hope that people in the wider community listen and think about the humanity of prisoners and listen to what people have to say, but ultimately it’s about providing a space to people who don’t have another space.”

According to Ntombi, empowering inmates is one step towards a broader goal of re-imagining how society addresses crime, punishment and rehabilitation. In her mind, approaches such as restorative justice – which focuses on people more than punishment – are more valuable than incarceration.

“Love is very central to the work that we do, and in order to move towards a place of love, we need to imagine other methods of punishment. What are other methods we can use to hold people accountable but also restore society’s ability to rehabilitate people?”

For Ntombi, who had no prior radio experience, the program is an opportunity to engage in a medium with which she has long been fascinated. She notes that radio played a key role in the anti-apartheid revolution in South Africa by helping listeners organize and coordinate their political action.

“When El asked me (to co-host), I thought it was a great way for me to test new ground.”

Radio may be a relatively new pursuit for Ntombi, but activism certainly isn’t. In her first year at Dal, she launched the “How Would You React?” campaign on campus, which depicted common scenarios wherein Black members of the community are casually stigmatized or marginalized. El partnered on the campaign, marking the beginning of a years-long friendship and working partnership, and the viral impact of the initiative resulted in the duo’s invitation to Harvard to participate at a conference for black students. 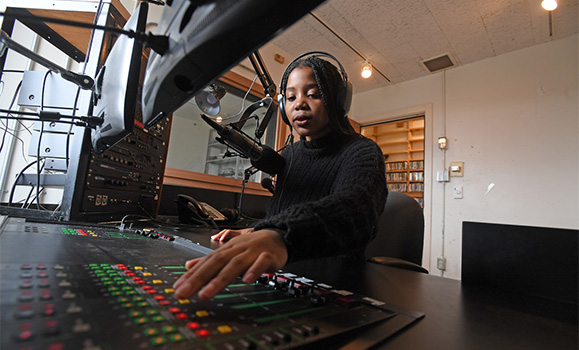 More recently, the radio show yielded another invitation to a U.S. college. In March, Ntombi, El and iZrEAL presented at the Behind the Bars conference at Columbia University. Organized by students, the annual conference focuses on issues relevant to the political empowerment of incarcerated peoples.

The Black Power Hour trio provided a distinctly Canadian context to conference-goers, sharing statistics about the incarceration of African Nova Scotians – which occurs at a rate even higher than in the U.S. – and how the radio show employs art as an instrument of political action.

Ntombi also realized a personal dream when she attended a speech by prominent activist Angela Davis. “I’d always wanted to see her speak live, so that was very exciting.”

Whether during Black Power Hour or during all the hours between shows, both El and Ntombi are emphatic that their work is a collaborative venture, one that brings together students, faculty, community members and, of course, incarcerated people. Indeed, the Black Power Hour hosts are adamant that it is inmates themselves who are the driving force behind their efforts.

“In all our work we aim to centre the people we’re working with and working for.” Ntombi says. “Instead of doing one-way programming where we assume the role of teachers and arbitrators of knowledge and power, people who are incarcerated are also teaching us.

“When people focus on one-way programming, it can be problematic, because you’re not speaking about dismantling systems. We’re trying to de-carcerate and decolonize the prison system and I think you do that through two-way programming.”

While achieving the kind of substantive, systemic change Ntombi is advocating for is no easy task, she remains undaunted in her mission. After all, the history of her family and her home country tells her that change can happen.

“I can see that there has been change in the past, even though it’s been slow, and imagine a future where things can be better and more opportunities are possible.”