Seventh-annual report is the first based at Dal 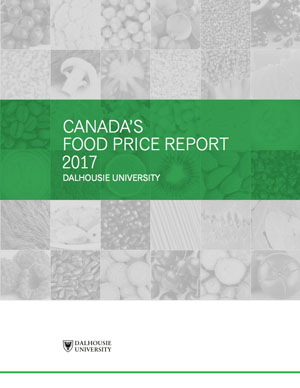 That’s the conclusion of the seventh edition of Canada’s Food Price Report, published for the first time this year at Dalhousie.

Built on the expertise of authors and advisors from four different Dal faculties — Management, Computer Science, Science and Agriculture — the Food Price Report is led by Sylvain Charlebois, dean of the Faculty of Management. The popular annual report forecasts food prices for the upcoming year across different sectors and analyzes trends in Canada’s food industries.

“Food pricing affects all Canadians,” says Dr. Charlebois, who previously led the project out of the University of Guelph. “It affects our quality of life. It’s top of mind for everyone every single day when we go out to buy food, whether at a restaurant or at a grocery store. And many Canadians struggle to cope with fluctuating food prices.”

An increase of 3-5 per cent in food prices would be considerably higher than the rate of inflation (typically 1-2 per cent), and larger than 2016 (about 2.5 per cent). While dairy/eggs and bakery/cereal are expected to remain stable and within acceptable inflation rates, other foods could see much higher increases: fruits and nuts by 3-5 per cent; vegetables, meats and other food items by upwards of 4-6 per cent.

“The biggest factor will be the falling Canadian dollar,” explains Dr. Charlebois. “Given how many food products we import from abroad, our food economy is vulnerable to currency fluctuations.”

Other drivers that inform the report’s projections include La Nina weather patterns and the incoming Trump administration in the U.S. — which, while rife with uncertainty, suggests a forthcoming period of American protectionism that could initiate a “commodity super-cycle,” raising food prices for Canadians.

Previous editions of the report have generated significant national media attention, and this year’s is expected to be no different.

“We are dealing with a more engaged marketplace than ever before,” says Dr. Charlebois. “People want to engage with the food supply chain, and examining price is one to do it.

“And it’s also that the report is not just about price: it’s about the future of food. It’s about the quality of the food we eat, it’s about food cultures; it’s a multidimensional report around food.”

The report also considers possible trends in food and food policy for the year ahead. For 2017, its authors discuss celebration of Canadian food (in honour of Canada’s 150th), food science fears and food fraud awareness.

One reason Dr. Charlebois was keen to bring the report with him to Dalhousie when he arrived as dean earlier this year was the opportunity to work with the university’s data scientists.

“I knew we’d have access to different kinds of expertise, and Dalhousie is one of the stronger schools in the country around data analytics and predictive analytics, if not the strongest,” he says.

This year’s report is the first to use a machine learning model to shape its forecast — a combination of algorithms built on more than 20 independent statistical variables like household income, fuel prices, global agricultural production and more. The model was built by researchers in Dal’s Faculty of Computer Science, led by Master’s of Electronic Commerce student Jabez (Jay) Harris together with Professor Vlado Keselj and PhD student Colin Conrad. 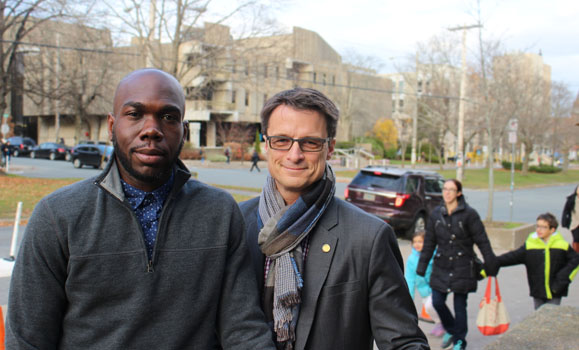 Harris, an international student from the Caribbean, has spent about 20 hours a week on the project over the past couple of months, building and running the “black box” that crunches the report’s numbers.

“Part of data science is finding the anomalies, and so part of my role was to poke into the data, find and filter out the variables that just don’t make sense with the rest of the model,” explains Harris.

But the process doesn’t start and end with a computer model.

“We allow the model to be the conversation starter amongst ourselves as advisors,” explains Dr. Charlebois. “We run it, then assess whether that makes sense for what could happen over the next 12 months with food prices. That’s how we come up with our forecasts.”

The advisors on this year’s report included:

“Everyone had a really open mind about the report,” says Dr. Charlebois. “It’s a very populist report — not your ordinary scientific paper. But everyone got what we were trying to achieve. It was a really great team.”

Dr. Charlebois says now that the report is established at Dalhousie, he may look to expand its authorship even further next year, possibly to experts at other universities. As for grad student Harris, he says it’s been an incredible experience working on his first Food Price Report — so much so that he’s considering shifting his thesis project to focus on it.

“What I got out of it is that data science is really about communication,” says Harris. “It’s about storytelling, finding the data and the new way to relate it to people.”