An image from Werner Herzog's 1979 film "Nosferatu the Vampyre."

Kala Hirtle is a doctoral candidate in Dalhousie’s Department of English. She was a finalist in Dal’s three-minute thesis competition in 2015. (You can watch a video of her presentation here.)

Her research combines 19th-century medical theories and treatises — such as documents on the history of anaesthesia and sleepwalking disorders with — 19th century gothic fiction published around the same time.

Q: What themes of horror in gothic fiction are you studying?

A: I’m looking at consciousness in gothic fiction. That breaks down into a couple of sub-genres that people are familiar with. Two of my chapters are on vampire literature that predates Dracula; Carmilla, Cristabel and The Vampyre.

I also have a chapter on the fear of  being unconscious but aware, such as appearing dead and having someone cut you open to display your anatomy. I’m looking at magazine short stories from the time from Blackwood’s Magazine specifically. The best known of these is “Post-Mortem Recollections of a Medical Lecturer” (1836)

I have another chapter that examines texts where people sleepwalk and commit crimes; basically, the question of whether sleepwalkers are culpable in those crimes. A related topic that I examine is altered states of consciousness, such as opium use. For sleepwalking my main source text is one of the earliest detective novels, The Moonstone.

Q: Was it the Victorians who buried people with shovels so they could dig their way out if they weren’t quite dead?

A: Yes, Taphophobia: the fear of being buried alive. This was the time when they had bells and whistles and other devices that, if the person was alive underground, could signal people to come to the rescue.

However most of these were faulty devices. As you rot your body expands and trigger the wire, ring the bell, and thus bloated corpses would be dug up. These graveyard systems combined with the fear of being buried alive is best known from Edgar Allen Poe's short stories.

They also used to have big Death Houses where they would have all of these dead bodies in beds, not caskets, set up with strings attached to bells on their fingers. The attendant would have to wait behind a glass wall (because of the toxic odours) and watch to see if anyone revived.

Q: Can you tell me more about the history of anaesthesia?

A: Anaesthesia was invented for the first time in the 19th century, so surgery no longer had to done while the patient was awake; now they could be put into an alternate state. But people were afraid of going under anaesthesia. The thought of giving up your free will, being put into an altered state caused people to question self-determination an important religious doctrine of the time. There was also the fear of not waking up from surgery.

This fear is, I think, where the vampires of the 19th century came from because the first vampire literature was written around the same time. Vampires are figures who are neither dead nor alive.

Of late, however, we have had our gothic monsters humanized. Carmilla is humanized in the sense that she is an extremely predatory character, but she isn't Angel from (the TV series) Buffy. Carmilla does not look out for Laura's well-being. 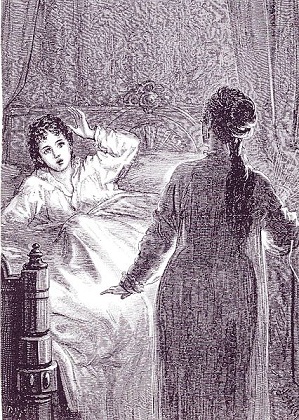 Q: Carmilla is kind of sexy

A: Yes, she is a predatory vampire who claims to love Laura. Scholars often look at the lesbian subtext but I don't look at those aspects. Carmilla is a vampire and she lives with a girl named Laura and her father, and creepily fakes being a human girl to get close to Laura and to manipulate and control her.

My dissertation focus is on how Carmilla mimics the sick 19th century woman tropes, and a way she is possessive of Laura. It’s another form of the Victoria boarding school relationship, but with a vampire.

People might think that Carmilla is a sexy story, and it has been looked at for its homoeroticism. But because Carmilla is dead she has to mimic someone who is on the brink of death, so she mimics an invalid. You have to take care of your sick friends, and so the sicker she is the more she draws Laura in. The manipulation is particularly creepy.

Q: Can you tell me more about the trope of the sick 19th century woman?

A: It is the languorous fainting girl. She can only have a bit of chocolate and wine to sustain herself. Laura, our protagonist, is healthy. But Carmilla simulates these tropes.

Many 19th-century female protagonists are these fragile, constantly languid, women. Often when you have stories of two women who are friends one cares for the other so you get those close friendships.

Q:  What is the creepiest part of your research?

A: Carmilla is the story of Laura, a lonely girl who just wants a friend. Carmilla simulates illness to  manipulate Laura to get what she wants. Throughout the story, Laura says that she both loves and hates Carmilla’s attention and physical embraces. The idea that someone could live which you and manipulate you, and also try to suck your blood, speaks to the social aspect of how we are afraid of people manipulating and mimicking us.

It’s not all super spooky. But it creeps my mom out. When people ask her what I study she has a hard time explaining it all.

Learn more about Kala's research at the Faculty of Graduate Studies website.