It's a Great Pumpkin, Dalhousie

Dal students and some of the more typically sized pumpkins on the Ag Campus. (Nick Pearce photo)

The Dalhousie Agricultural Campus in Truro is known to many for its beautiful and functional campus gardens — gardens that have even been highlighted in Nova Scotia’s provincial garden tour.

The Chef’s Garden, for example, is currently in its fifth year of development and enables the Agricultural Campus to supply its own vegetables for on-campus dining and education. Then there’s the Community Garden, which enables members of Truro/Bible Hill to rent plots to grow their own harvest.

And this year, they are growing giant pumpkins in the Demonstration Garden — Dill’s Atlantic Giants to be exact.

Despite having no formal education in genetics, the late Howard Dill is responsible for the growth and development of the variety of pumpkin known as “Dill’s Atlantic Giant.” An honorary associate of the former Nova Scotia Agricultural College, Dill’s research and development began in the 1960s; today, pumpkins grown from his Atlantic Giant seeds exceed 1,100 pounds in weight.

With seeds acquired from Danny Dill, Howard’s son, summer student employees set out to grow a giant pumpkin which was then harvested by students in Horticulture 2000 (Vegetable Production) this fall.

“Not only is it a fun activity, it’s a chance for students to learn about growing gigantic vegetables,” explained Agricultural Technician Mike Main in the Department of Plant, Food and Environmental Sciences. “You have to have the right genetics and you have to take care of them. They require different treatment.” 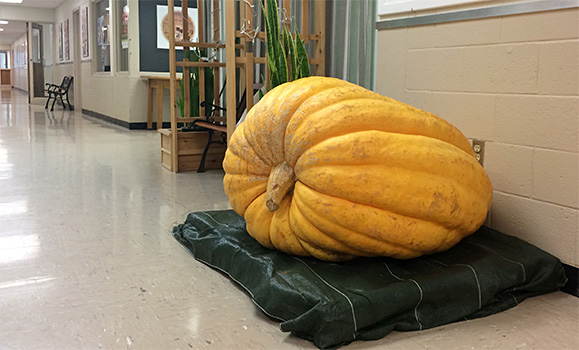 A total of seven Atlantic Giant pumpkins were grown, each 200 lbs or larger and currently on display around campus. A contest just ended to guess the weight of the largest, which is on display in Cox Institute. The result: 452 pounds.

Giant pumpkins are used mainly for fall fairs and international pumpkin competitions that are becoming increasingly more popular around the world. Pumpkin seed is a live product which depends on many important related grower skills and factors, including geographical location, temperatures, availability of plant nutrients and moisture, as well as many unknown environmental factors, all of which interact to determine a variety's performance. Fruit colours vary from yellow to orange and the skin is slightly rough and require 130 days to reach maturity.

“Growing giant pumpkins is interesting for students," says Main. "We grow tiny little ornamental pumpkins, no more than a half a pound and we grow huge pumpkins. We grew some medium size giant pumpkins last year and this year’s pumpkins are about twice the size as last. The challenge now is to grow them double as large again — if there is a student who wants to take up the challenge next year!”