The IDEA project: How it will transform Sexton Campus

An in-depth look at the Sexton Campus IDEA project

A rendition of the exterior of one of the two new buildings of the IDEA project, dubbed the "Innovation Building," as viewed from behind Gerrard Hall.

Every great advance, every big step forward, begins with an idea — or, in the case of Dalhousie’s downtown Halifax campus, an "IDEA."

That acronym — which stands for “Innovation and Design in Engineering & Architecture” — is a familiar one to many in the Dal community. For several years now, it’s been used to describe planned future development on Sexton Campus to support Dal’s Faculties of Engineering and Architecture & Planning.

Now, the IDEA Project has grown into a massive $64-million investment in Dal’s downtown campus, thanks to support from donors, industry and the Government of Canada (whose $32 million contribution was announced Friday, September 30). Set to begin construction this fall, IDEA will not only revitalize Sexton Campus but truly transform it, making it the heart of Halifax’s emerging innovation district.

Dalhousie President Richard Florizone calls it an “historic” initiative that will elevate design-oriented technical education and research at Dal to a global standard.

“The best university projects support our entire threefold mission — teaching, research and service — and this addresses all three so well,” says Dal President Richard Florizone. “It strengthens engineering, architecture and planning education. It offers new, state-of-the-art space for research. And it’s really going to make a huge impact on our ability to provide important support to entrepreneurs, local companies and NGOs, and our surrounding community in general.”

Read more: A new era of innovation — built on an IDEA

Two new academic buildings, totaling 86,000 sq. feet, will stretch across Sexton Campus from Morris Street towards the Halifax Central Library. The first, dubbed the “Innovation Building” at present, will feature five state-of-the-art, student-centred workshops (including machine, working and prototyping shops) and dedicated space to support both student entrepreneurship and external startups and industry. The second, known as the “Design Building,” will include a 450-seat auditorium and four new design studios for Architecture and Planning students. It will also be the future home for Dal’s master’s programs in Landscape Architecture (Halifax) and Community Design. The buildings will also support technology diversity programs.

“Access to these IDEA labs is going to allow our students to engage in concrete fabrication, metalwork fabrication and all kinds of design activities that are central to our curriculum,” says Christine Macy, dean of the Faculty of Architecture & Planning.

Secondly, IDEA includes R&D infrastructure renewal to create of research and outreach hubs around three sectors: clean tech, oceans tech and advanced manufacturing. These hubs will provide faculty, students and industry/entrepreneurs alike with space and facilities for applied research, product development, collaboration and commercialization. The three areas not only align with the skills of Dal’s researchers, but are all key sectors for Nova Scotia and the region: advanced manufacturing, for example, represents the largest output of any goods-producing sector in Nova Scotia ($2.7 billion in GDP), while revenues from the province’s ocean tech sector has doubled in recent years.

“It’ll mean complete rebuilds of our infrastructure in areas where we’re national research leaders like environmental and materials engineering,” explains Josh Leon, dean of the Faculty of Engineering.

“Every building on the campus is going to be touched by this construction,” adds Dr. Leon. “It’s very exciting.”

Students and faculty on Sexton Campus have been eagerly awaiting a project like IDEA for some time. Aside from renovations to the Medjuck Building in the early 2000s, there hasn’t been any significant capital development on the campus since the 1997 merger of the Technical University of Nova Scotia (TUNS) with Dalhousie. 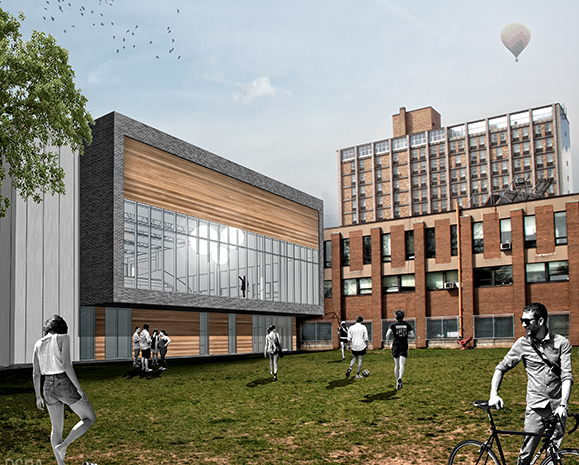 At the same time, its programs have been growing in size. The campus hosts Atlantic Canada’s only schools of Architecture and Planning, in which enrolment has been limited due to available studio space. Meanwhile, enrolment in Dal Engineering — which also attracts diploma grads from other Nova Scotia universities — is up 44 per cent since 2008, reflecting rising industry demand for talent.

“Over the past 10 years, we have modernized our curriculum to include much more design education and problem based learning,” says Dr. Leon. “It has been met with tremendous enthusiasm by our students and industry alike. Unfortunately, our outdated spaces have really proved challenging, resulting in long hours, crowding in labs and very creative use of the spaces we have.”

In recent years, Dal has been renting space in a nearby movie theatre for introductory Engineering courses due to limited capacity (something the new lecture theatre space will solve), and facility concerns were flagged in recent Engineering accreditation reviews. That’s why an IDEA building project has been a key priority for Dalhousie for some time, and was included in the 2010 Campus Master Plan. But it’s taken until now for the right combination of partnerships to come together to make it possible.

Friday marked the official launch of the public phase of the IDEA Project Campaign, raising funds to match the $32 million contribution of the Government of Canada. The campaign was kick-started with a $1-million gift from Marjorie Lindsay in honour of her late husband John Lindsay Sr. — a Dal Engineering grad — and includes students in Engineering and Architecture & Planning, who generously agreed to support the initiative through a student fee. And there are more exciting announcements about IDEA donors and partners to come in the weeks and months ahead.

Read more: A new era of innovation — built on an IDEA

“We couldn’t do this without dedicated community partners who are committed to strengthening our society by supporting advanced education,” says Peter Fardy, vice-president of Advancement. “Dalhousie is really a connection point for industry, researchers and students. That’s how we foster innovation, new ideas and entrepreneurship, and it’s how we create opportunities for students to excel, innovate and make a difference.” 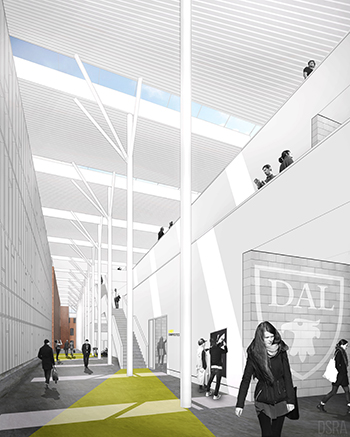 “You’re getting a mixture of engineers, architects and planners and giving them a place to think of innovations and where they can go in their field,” says Lindsay of the IDEA vision, adding: “I just hope that this old girl hangs in there until they get a shovel in there!”

Just like with most good ideas, the extra time IDEA has had to germinate has made it stronger. With the increased scope, it’s not just about new buildings for students and faculty, but spaces to allow those students and faculty to have a greater impact on their community. IDEA will double the amount of prototyping space Dalhousie provides local businesses, for example, and introduce cutting-edge incubation space to better link students and faculty to industry and entrepreneurs.

This makes IDEA part of an even larger idea: an “innovation district” in the heart of downtown Halifax.

“You’ve got this beautiful Central Library next door,” says President Florizone. “Nearby, you have local IT startups, Halifax’s downtown business district, new residential development and research hospitals. And then there’s IDEA. You can start to picture this vibrant precinct around lower Spring Garden Road — built on youth, energy, public engagement and innovation. And that’s incredibly exciting for this city and our region.”

Construction on IDEA is set to get underway this fall with a targeted completion date for the new buildings of spring 2018. Staff, faculty and students had the opportunity to provide input on the design this past winter, and — along with neighbours and other external stakeholders — can expect to hear updates from the university on construction timing and activity as it progresses.

Visit the Campus Development website for more info and updates on the IDEA project.