Campers in Digby and their rockets, ready to launch. (Photos provided by the Imhotep's Legacy Academy)

Few things grab a child’s attention quite like a noisy rocket flying into the sky.

“The very first one is always very exciting,” says Dal Chemical Engineering student Bai Bintou Kaira. “It can be quite noisy; if the kids aren’t paying attention, usually because they’re talking, they can get quite surprised by the sound.”

Bintou has spent her summer on a co-op term with the Imhotep’s Legacy Academy (ILA) — a university-community partnership focused on improving student success and bridging the achievement gap for youth of African heritage in Nova Scotia. With a particular focus on STEM fields (science, technology, engineering and mathematics), ILA operates across the province through a variety of different programs.

Bintou first got involved with ILA as a tutor in its Virtual School Program. Now, during her co-op term, she’s been helping lead a partnership with the Department of Education’s African Canadian Services Division on its annual BrainPower/Quest for Knowledge Summerslide daycamps. The partnership sees ILA helping the elementary-age campers build and launch rockets as a way to have fun with science and technology.

ILA first began working with the Summerslide camps three years ago in North Preston. Last year, ILA expanded the two-afternoon activity to include Beechville, and this year took the rockets on the road to Digby. 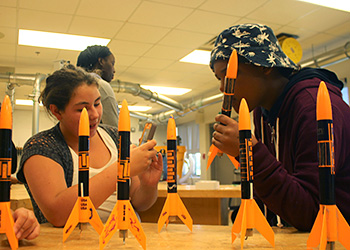 “We do rocket assembly the first day, and the second day is the rocket launching,” explains Bintou. “During the first day we explain the concept behind the rocket, and do a presentation on something science-related; this year it was about the solar system. It’s about getting the kids excited about space, science and technology.”

The rockets are made out of a cardboard, but with an actual small engine attached. (Dal’s Faculty of Engineering sponsors the rocket kits, supplied by Maritime Hobbies & Crafts.) They take about an hour for the students to assemble, but they have to wait until the following day to see them take to the skies. The rockets have quite the range; Bintou says some of them aren’t quickly recovered. All students receive certificates for their participation, with special prizes for the rockets that go the highest and farthest.

“It was pretty cool because we got to make them ourselves and it was hands-on," said Shaneyce, a student who took part in the Beechville BrainPower camp.

For Bintou, who came to Dalhousie from The Gambia, being involved with Imhotep’s Legacy Academy is an inspiring experience. 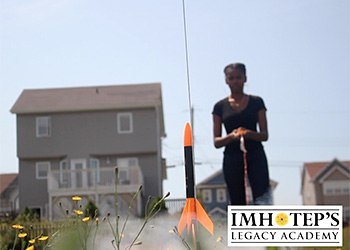 “It’s making sure others have the chance to be in university, to learn about science; it’s impactful,” she says. “There are [high school] students I’ve tutored two years ago who are in university now, and you know what they went through to be here. They’ve achieved something — and now they’re set to achieve even more.”

Imhotep's Legacy Academy's sponsors include several Dal faculties, including Engineering, Medicine, Health Professions, Science and Computer Science, along with the President's Office. Learn more about the academy and its programs at its website.