There’s a rumble in the air of Dal’s Sexton Gymnasium.

Along the side stage, small groups of Engineering students are huddled, sorting through small plastic bins of wires to find the right spare part. In the stands, onlookers support their friends while waiting for their own turn on the gymnasium floor.

And in the centre of it all, two small robots sit at the starting line of a simple-yet-challenging wooden maze as their creators stand on the sidelines, unable to do anything but watch and hope for the best. 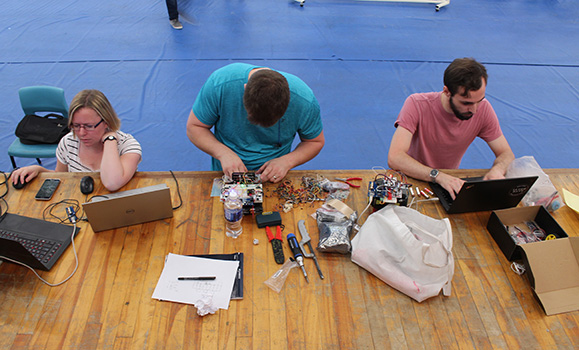 Since the spring, students in ECED 3901 (Electrical Engineering Design II) have been working on building small, foot-long robots to navigate an obstacle course. They’re provided with the components, and have to use them to build a machine to complete tasks that change every year; there’s no repeating last year’s models. This year’s incarnation of the course was titled “Maze Runner,” and required the robots to use light sensors to trigger or respond to obstacles in their path. 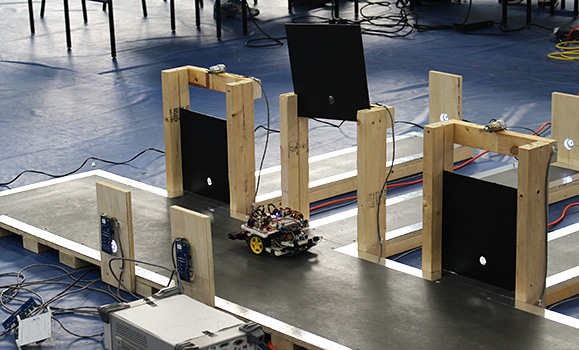 “The project is a means of hands-on learning,” explains Aaron MacNeill, the course’s instructor. “It’s focused on helping students assess real world problems, propose solutions for those problems and develop the hardware and software required to perform the task. They also have to troubleshoot and think critically during the design process, and they learn how to manage time effectively.”

Part of what makes the assignment challenging is that the robots have to be entirely autonomous; once they’re activated by a light source, they move through the course without human input.

Doubly complicating matters was the key feature of this year’s course: three doors at the end, one of which led to the finish line but one or more of which would be closed at random. A frequency of light was provided to help the robots determine which path was the correct one to take, but they needed to be able to pick up and read the signal. 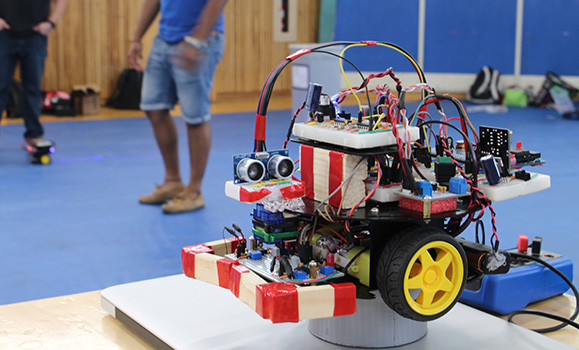 Throughout the day-long competition, there were robots that failed to start, robots that went in the wrong direction, and robots that struggled to read the light signals. That failure is all part of the learning process — students learn how to adjust and rework their original plans.

But sometimes, those plans work. Students Ahmed Alysousef and Abdulrahman Al Jedaibi (Team 25) were among the first to complete the obstacle course in the morning’s heats. At day’s end, their robot — dubbed “Hunter” — was crowned the winner.

“We’ve probably put about 100 hours of work into it,” said Ahmed.

To what did they credit their robot’s success? “Making the robot go in one straight line is the hardest part,” says Abdulrahman. “It’s practically impossible.”

Their method of using metal detectors to follow a metal strip under the course proved successful, guiding Hunter to the maze’s end. 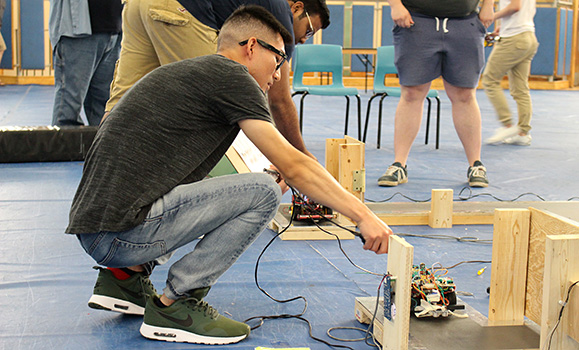