If you’re looking to get more protein in your diet, third-year Agriculture students Holly Fisher and Hartley Prosser have the solution for you — although it may not be one you’ve considered before.

Utilizing insects as a source of protein has been gaining a lot of popularity in recent years. “People are starting to see the possibilities of it, rather than get grossed out by it,” says Hartley.

Holly and Hartley have worked hard over the course of the past year to develop their own mealworm flour under the name 3MEALS. At the moment, their manufacturing process involves freeze drying.

“We freeze dry the mealworms, and then take out the fat, which gives us a high protein product with a long shelf life,” Holly explains. “Afterwards it’s ground up into a fine flour.”

However, they are currently working on a new processing method with Perennia, an agri-food and bio-resource company based in Truro, in an effort to further refine their technique.

An efficient source of protein

According to Holly, mealworm production is fairly efficient.

“Generally, it takes 20,000 mealworms to make 1 kg of our flour,” she says. “The mealworms are very easy to grow. They really don’t need much space, and only need a minimal amount of inputs, which we are trying to source from otherwise unusable material.”

A third of the global population is already consuming insects, so introducing a product such as 3MEALS flour would not be difficult in other places around the world.

“What we have been suggested to do is speak with disaster relief programs that need a high quality, low weight protein source to send to places in need. Since shipping actual meat is not an option, it may be of value for these programs to send insect protein powders.”

The duo are hopeful other markets will open up in the future. Although some may shy away from including insects in baking or supplements, those brave enough to try the mealworm flour will find that it has a smooth, nutty flavour to it — similar to walnuts.

Holly first became interested in entomophagy (that is, the consuming of insects as a food source) after giving a two-hour presentation on the subject in her Agriculture and Contemporary Issues class.

“This allowed me to explore a current agriculture topic and discuss it with the class,” she explains. “Since I was planning on studying entomology, I decided to pick the topic of consuming insects, and was absolutely blown away by the possibilities of using insects as a food source.

“After giving that discussion, Prof. Tennessen decided to start the IFF group (Insects for Feed and Food), and we have been working on entomophagy related projects since then. Speaking for Hartley, he was in the Starting Lean class with me, and enjoyed the idea, so decided to join the 3MEALS team. He also has a keen mind to sustainability, and controlled environments, which worked well with business concept and research.” 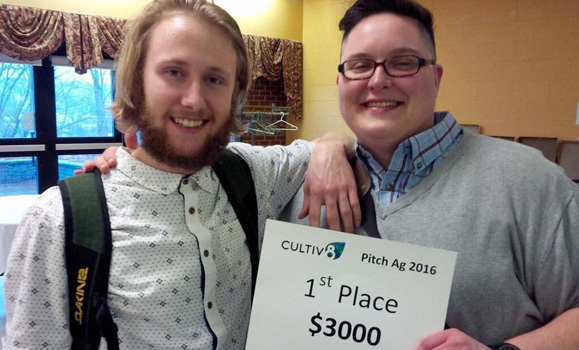 Hartley and Holly after winning the Cultiv8 pitch competition.

The duo have competed in various business model competitions. The two claimed first place at the pitch competition hosted by Cultiv8, the Dal-hosted agricultural sandbox. They then competed in the Canada’s Business Model Competition hosted by Dal’s Normal Newman Centre for Entrepreneurship and the Rowe School of Business. There, they were nominated to compete at the International Business Model Competition in Seattle, Washington this past weekend. While the team had an amazing experience, they came up just short of making the semi finals.

As for next steps, the pair is working with a business accountant to help walk them through the business process.

“He is taking on doing the paper work for us, [which] will help us focus on the production side of the business, as we mitigate these other details,” Holly says. “We will be using the funds from the Norman Newman Center for Entrepreneurship, which is available to the students who take part in the Starting Lean class, to pay for the process.”

All of this wouldn’t have been possible without Cultiv8.

“It has been such an amazing experience for both of us, and has helped us take ideas forward that we would never have been able to without their assistance,” says Hartley. “As a science student, I never really thought about entrepreneurship, but Cultiv8 made me realize just how much I enjoy business. Plus it opened my eyes to the business potentials that can be found throughout our campus, such as insects as a food product.”