A trek for a good cause

Jonathan Wright decided to buck the trend on a recent trip to Machu Picchu through the Andean Mountains in Peru: rather than present the usual gift of pencils and toothbrushes to the locals in one of the villages where he stayed, he gave them a couple of Frisbees.

Dr. Wright, a Dal Biology professor, says the children were dismissive of the toys at first but quickly took an interest after two of the young boys started slinging the shiny discs around.

“Suddenly the kids were just enthralled,” he remembers. “They were so enthralled, in fact, that they started whacking one another around the heads with their bags to get it.”

While Dr. Wright succeeded in his goal of bringing something that was not “boring”, fomenting a mini-riot among the local children was not quite what he had in mind.

Matters calmed down considerably once someone from the local school stepped in to manage Frisbee playtime, leaving Dr. Wright to focus again on the broader mission at hand: raising money for the Arthritis Society of Canada. 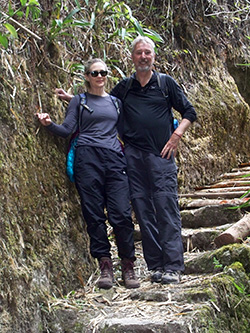 Dr. Wright and his wife, Dal pharmacology professor Eileen Denovan-Wright, joined 20 others on the five-day expedition to the 15th-century Incan ruins at Machu Picchu this past September to raise $55,000 for the charity.

Dr. Wright, who was diagnosed with reactive arthritis two decades ago at age 40, contributes regularly to the organization, which helps improve the lives of the 4.6 million Canadians who live with the disease through its research, support and education efforts. Arthritis causes painful inflammation of tissue and stiffness in the joints.

When the two profs got word the society was teaming up with UK-based tour operator Charity Challenge for its inaugural fundraising trek, they saw the chance to give back and fulfill one of their long-held travel dreams all at once.

Participants have two fundraising options. They can choose the "self-funder" option (like Dr. Wright and Dr. Denovan-Wright) where they pay the full cost of $2,100 for the trip with a commitment to raise a minimum of $1,500 for the society.  Or they can opt for the 'flexi-funder' model where they pay $1,100 out of pocket and agree to raise a minimum of $4,000 for the organization (of which a maximum of $1,000 will be used to cover the remaining costs of the trip). In both cases, participants cover their own airfare to Peru.

Rather than taking the more commonly used Inca Trail, the group made their way to the ruins along the Lares Trail — an alternate route widely regarded as the more challenging of the two.

After spending a couple of days acclimatizing to life about 12,000 feet above sea level in the city of Cusco (the ancient Inca capital), the crew rode a bus to Lares. There, they took a dip in the thermal hot springs before embarking on a six-hour hike to the town of Cuncani, where they met some local Quechua residents and set up camp for the night in the shadow of a massive glacier as the temperature dropped below freezing.

“I had all my clothes on, a fleece jacket and a liner in my three-season sleeping bag,” says Dr. Wright. “In the morning, you’re just waiting for the sun to come up over the mountains.” 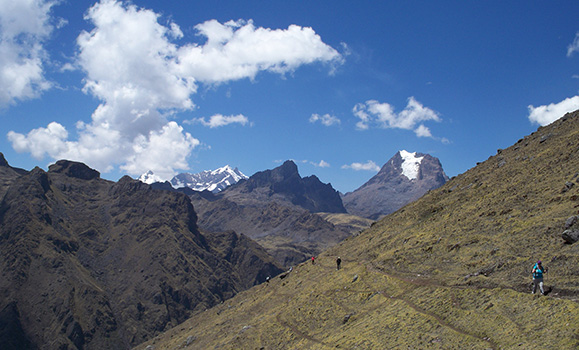 Weathering the cold that night was easy compared to what came next, though. Six of the 22 people along for the trek – including Dr. Denovan-Wright – came down with altitude sickness the following two days as they ascended past herds of alpacas and llamas to an apex 14,600 feet high (for comparison, the CN Tower in Toronto stands at just over 1,800 feet.).

“They had a canister of oxygen there, which became my best friend for 30 minutes,” Dr. Denovan-Wright recalls, adding that her symptoms were fairly mild compared to what others suffered through.

Even though she had read up on acclimatization, she didn’t realize just how important it is to be aware of those symptoms (headaches, dizziness, nausea, etc.) and when to ask for help. “I was really glad they had such great people there to look after us,” she says, referring to the doctor and other support staff that came along on the trip.

The few who suffered from fatigue during climbs through the highest mountain passes were able to ride on one of the packhorses used to transport all the group’s gear and food for meals.

“Physically and psychologically, this was probably the most challenging thing many of us had ever done,” says Dr. Wright, noting that he was one of several others along for the journey who had some form of arthritis, including some 20-30 year olds.

“A common misconception about arthritis is that the disease only affects seniors,” he says. “This just isn’t true: teenagers and younger children also suffer from arthritis, a disease that robs them of so much potential unless managed”

Along the way, the Dal profs chatted with many of the participants about their commitment to raising money for the Arthritis Society. They learned that researching a cure is one small element in the broader spectrum of people’s priorities that includes the need for more home care, better treatment methods and wider public outreach.

Despite being the leading cause of disability among women and the third most common for men, arthritis doesn’t register with the broader public in quite the same way as some other diseases, says Dr. Wright.

“It’s not one of those diseases that catches the dramatic imagination that having something like cancer does, but some people are crippled by it and they can’t do much,” he says.

Dr. Wright manages his arthritis through a combination of medication and exercise, something he certainly got a lot of on this trip.

By the time he and the other trekkers reached the Sun Gate — the entrance to Machu Picchu — they were exhausted and smelled worse than the alpacas and llamas on the trail, but not too tired to stop and appreciate what they’d accomplished.

“There was a lot of celebration,” he says. “This was a big deal for a lot of people.”

The Arthritis Society’s next Machu Picchu trek happens from April 30 to May 8, 2016. More details.