A look at the one-of-a-kind SeaCycler

One of the world’s most sophisticated ocean research tools spent the past year undergoing a dramatic makeover in a Dalhousie research facility.

Now, the one-of-a-kind ocean-based observatory known as the SeaCycler has embarked on a journey that will eventually see it deployed for the first time in the volatile Labrador Sea later this summer.

The first leg of that voyage began last week when a team of engineers and researchers carried out a successful four-day test deployment of the more-than $1-million instrument in the Bedford Basin with the close cooperation of staff at the Bedford Institute of Oceanography.

Deploying the 1,200-pound SeaCycler requires a great deal of skill thanks to its hefty size and complex structure. When assembled, the SeaCycler's three main components — a large blue and yellow cable-dispensing winch, an instrument float jammed with sensors, and a small-but-sophisticated communications float — occupy the upper portion of a 3.5-kilometre long mooring cable that stretches vertically from the ocean floor to the surface.

Thankfully, the Dal members learned some important lessons from the test last week that will enable them to fine tune pre-deployment procedures before the SeaCycler is loaded onto Labrador Sea-bound German research vessel Maria S. Merian during a port call in Halifax between August 21-25.

There are plenty of reasons the SeaCycler holds such value for ocean researchers, but chief among those is its unique ability to take measurements near the sea surface over longer periods of time.

Most existing technology simply would not be able to withstand the impact of the large storm waves, intense ocean currents, and biofouling encountered at those levels of the Labrador Sea, an area considered a critical part of the world’s ocean for studying climate change. The SeaCycler, by comparison, has been designed precisely to compensate for such shortfalls.

By deploying the SeaCycler into the Labrador Sea for a year, Dal's team hopes to gain a better understanding of how a warming climate may be impacting the region, which scientists refer to as one of the “lungs of the ocean” for its role in facilitating the deep ocean’s intake of oxygen. Presently, the region also takes up and stores large quantities of carbon dioxide that have been released to the atmosphere by the burning of fossil fuel. 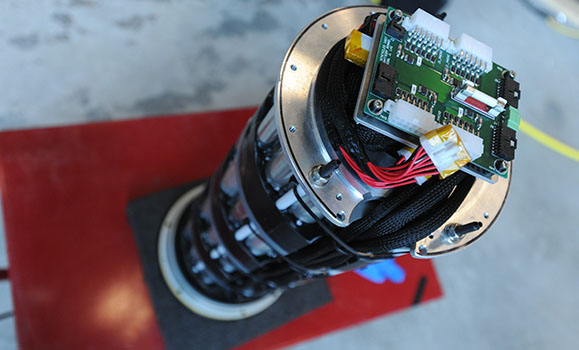 “Sensors will measure this deep breathing process over a period of a year and give us a better sense of how changes like freshwater input from the melting of ice on Greenland, for instance, might be impacting the delivery of oxygen and carbon dioxide to the deep ocean,” says Doug Wallace, Canada Excellence Research Chair in Ocean Science and Technology and Dal’s lead investigator on the SeaCycler project. The SeaCycler deployment is part of the NSERC project “VITALS”, a multi-institutional project coordinated by the University of Alberta that includes the Scripps Institute of Oceanography.

Mechanical engineer Greg Siddall, electrical engineer Jeremy Lai and a team of technicians working out of Dal’s Steele Ocean Sciences Building have been able to refurbish the device after its last deployment over a year ago in the Northeast Pacific. The technology’s development is a story of collaboration, with important contributions from researchers and technicians from the Bedford Institute of Oceanography and the Scripps Institute of Oceanography in the United States in addition to Dalhousie's work on the project. In fact, the winch is on loan to the Dalhousie team from Scripps.

Richer data than ever before

What makes the Dal team’s improvements to the system so important is they allow for many more simultaneous measurements and increased flexibility in how data are collected.

On a basic level, the winch plays the role of workhorse in the SeaCycler apparatus by feeding out cable to the instrument pod as it takes measurements during its daily trip to the surface. The sensor float shuts off once it reaches the surface and a communications float, positioned above it at the very top of the mooring, talks to satellites and sends the newly collected data back home to shore.

Daily profiles from 150 metres to the surface over a yearlong mission are now possible given the SeaCycler’s unique ability to conserve energy while active. SeaCycler also monitors the tension of its cables and will automatically abort a profile before reaching the surface if wave forces are large.

Dr. Wallace and his team have also streamlined the design of the two-way communications float to make it more stable and energy efficient. It’s a critical piece of the apparatus as it lets researchers send SeaCycler instructions if they wish to alter sampling schedules or procedures. 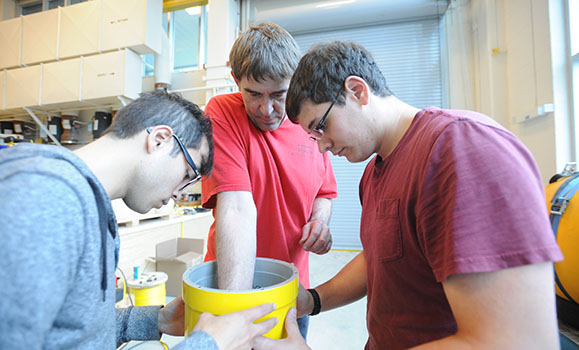 From left to right: Jeremy Lai, Greg Siddall, and Derek Boudreau assemble one of the SeaCycler's components.

What’s more, the data being collected are much richer and more detailed than ever before. The sensor float has been revamped to collect a much broader range of data — including measurements of light, oxygen and carbon dioxide, salinity and temperature, and biological variables — simultaneously, while also being depth stamped.

“The SeaCycler as it is now configured is a much more versatile instrument,” says Dr. Wallace, noting that many of the advanced new sensors and components bundled onto it were made by companies here in Nova Scotia.

When inactive, the sensor and communication floats are stowed away near the winch at about 150 metres below the surface, which is deep enough that they are in the dark. That means viewing ports and pump intakes are less likely to get clogged or malfunction than if they were stationed in the sunlight closer to the surface.

“Keeping all components at depth for 23 hours a day greatly reduces the amount of plants and animals that grow on it,” explains Siddall.

The German ship will be open to the public in Halifax on August 22, which will offer the chance to get an in-person look at the SeaCycler before it embarks on its yearlong mission.

Dal ocean researchers and students are on board the ship now. Follow its progress as it cruises to Halifax. Click on the full story link and scroll down for the English version.