When it comes to ocean sciences, Nova Scotia — a coastal province boasting the world’s highest tides and a growing “blue economy” — has a knowledge gap among its youth.

Three Dalhousie researchers set out to study the level of ocean literacy in Nova Scotian students and their findings offer a glimpse into provincial school curriculum and how youth in the province understand the ocean today. With ever increasing human dependence on the oceans, and concerns over climate change and human activities that threaten the health of the world’s oceans, researchers believe it’s crucial that citizens become more educated and informed about their ocean environment.

“We developed a survey and a quiz, which aimed to understand young people’s level of ocean literacy, their interest in ocean topics, activities, and careers, and the value they hold for the ocean,” explains Haley Guest, lead author of "Youth and the Sea: Ocean Literacy in Nova Scotia, Canada" and ocean education research associate with the CERC.OCEAN lab at Dal.

Guest teamed up with Doug Wallace, Canada Excellence Research Chair in Ocean Science and Technology and Heike Lotze, Canada Research Chair in Marine Renewable Resources, on the research that was recently published in Marine Policy. What began as Guest’s honours thesis while studying environmental science at Dal became an in-depth look into ocean education and what’s sticking with students.

In November 2013, the quizzes and surveys were distributed to over 700 students ranging from ages 12-18 in 11 public schools across Nova Scotia. Students, on average, scored under 50 per cent on the quiz.

“I was expecting a low level of ocean literacy,” says Guest, adding that despite lower quiz scores, students generally value the ocean and are interested in learning more. The three authors all note that most science lessons and textbooks focus on terrestrial examples to help explain various scientific concepts and theories. Each of them also acknowledges personally taking an interest in earth and agricultural sciences or forestry well before they began studying the ocean. A general terrestrial focus in curriculum — and the fact that there’s only one mandatory ocean science unit covered in grade eight — may help explain the low level of ocean literacy among the students quizzed in this study.

The quiz contained multiple choice and open-ended questions that touched on ocean life and geochemical or physical features of the oceans. Questions like “Where does the salt in seawater come from?” and “What causes sea level rise?” stumped many of the students taking part. The corresponding survey explored students’ interests in various ocean topics and activities. Ultimately, students with interest in multiple ocean-related activities, such as going to the beach or fishing, scored higher on the quiz. 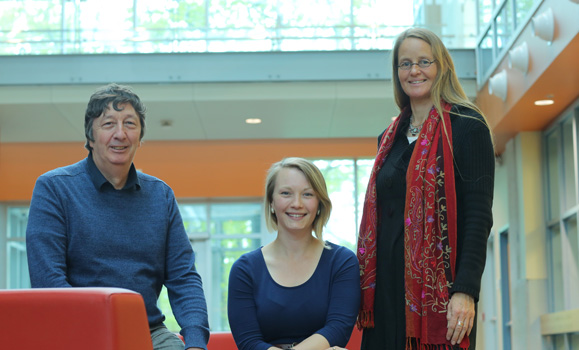 The researchers agree that using ocean animals as a “hook” to teach students about the non-living features of the ocean could help increase overall ocean literacy. Sea turtle movements, for example, could help teach lessons on ocean currents.

But one of the key findings from the study show strong links between students’ experience with the ocean, their knowledge and value of the ocean, and their interest in ocean-related jobs and careers. This suggests that personal experiential learning outside of the classroom can increase students' knowledge, but it also raises a flag that classroom curriculum is falling short.

“There are tons of opportunities in science courses to use the ocean as an example, but they’re just not used by teachers unless someone has a real passion and interest in the oceans,” says Guest, referencing the anecdotal data she collected while interviewing teachers at participating schools. “I think oceans examples need to be incorporated into the core curriculum.”

Guest, together with Drs. Lotze and Wallace, is currently working on a second paper on public perception of threats to the ocean and ocean protection. Meanwhile, she is also collaborating with Dal marine biology researcher Boris Worm to help address the gap in oceans knowledge among youth.

The two have partnered with the National Film Board of Canada (NFB) and are in the early stages of planning an "Oceans School" concept for NFB's CAMPUS program, which would bring oceans education to schools across the country. Studies have shown that many students tend to lose interest in sciences during middle school. This concept will target that age group and help teachers use an innovative ‘ocean lens’ through which to teach core science curriculum — building on the inherent fascination that students have shown for ocean life.

In the meantime, Guest will present her findings and Dr. Worm will deliver a keynote address at Canada’s first national ocean literacy conference in Vancouver later this month. The conference is sponsored by the Marine Environmental Observation, Prediction and Response Network (MEOPAR), which is hosted by Dalhousie,