Dalhousie radiologist Dr. Sharon Clarke sees a lot of fatty livers in the course of a day.

“MRIs are frequently revealing that patients have excess fat in their livers,” notes Dr. Clarke, an assistant professor in the Department of Radiology who spends much of her time analyzing MRI scans at the QEII Health Sciences Centre in Halifax.

“For most people, the condition can be reversed before permanent damage is done, but for others the liver is already inflamed and they’re at risk of fibrosis, cirrhosis, liver cancer or even liver failure. In fact, it’s projected that fatty liver is going to be the major indicator for liver transplant in the future.”

Dr. Clarke is one of several members of Dalhousie Medical School’s faculty who are alarmed by rising rates of fatty liver disease in the Maritimes. Hepatologist Dr. Kevork Peltekian and transplant surgeon Dr. Ian Alwayn share her concern. All three are taking the lead on research projects to address the issue.

“We suspect that 25 to 40 per cent of the adult population has fatty liver to some degree, while about 5 per cent of adults have fatty livers that have progressed to the point of inflammation, known as steatohepatitis,” says Dr. Peltekian. “Fatty liver has surpassed alcohol as the leading cause of liver disease.”

The challenge, according to Drs. Peltekian and Clarke, is to identify those 5 per cent of adults with steatohepatitis, who face a high risk of potentially fatal disease.

“It’s really a silent epidemic, because there are usually no symptoms until the damage is beyond repair,” says Dr. Peltekian. “Fatty liver is most often identified when people are having ultrasound or MRI investigations for another reason. Right now, the only way to know for sure if they have inflammation is to do a liver biopsy, but the numbers of patients are so high, this would overwhelm the health care system.” 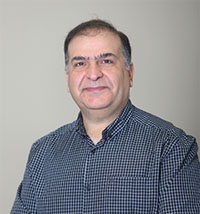 Thanks to new diagnostic technologies being developed in Halifax, Dr. Peltekian (left) is now sending his fatty liver patients to Dr. Clarke, who’s working with fellow Dal radiologist, Dr. Steven Beyea, and his team at BIOTIC (Biomedical Translational Imaging Centre) to develop new MRI algorithms that will reveal much more information about fatty livers than current MRI technologies can. The new technologies are part of a $7.6 million technology-development project funded by ACOA’s Atlantic Innovation Fund, Capital Health, and a corporate partner.

“The new algorithms will enable us to see how much and what kinds of fat are in the liver, so we can more accurately predict if a person is at risk of serious liver disease, without a biopsy,” says Dr. Clarke. “These are the people who require the most urgent attention.”

The new MRI technologies will streamline access to care for the more serious cases — which, as Dr. Peltekian explains, requires a lot of work and a lot of support.

The treatment for fatty liver disease is not a medication. “There’s no magic potion,” says Dr. Peltekian. “People with fatty livers need to control their blood sugar and lose weight—it’s not about fat in the diet, it’s about excess calories and sugars that are converted to fat and stored in the liver.”

Fortunately, liver cells can regenerate themselves, so fatty liver disease is reversible if it has not progressed too far. Once the liver is heavily scarred, however, it can no longer heal itself. In this case, treatment can halt or at least slow down the progression to fatal liver disease.

Dr. Peltekian, who heads Dalhousie’s Division of Digestive Care & Endoscopy, is working with his colleagues in hepatology, nursing, nutrition and exercise science to manage fatty liver disease with a new approach. Rather than seeing a specialist when first diagnosed with fatty liver, people attend a three-hour group session (a Fatty Liver Forum) led by the team of professionals, where they gain in-depth information about the disease and how they can stop or reverse it.

“We believe the Fatty Liver Forum will achieve better results for patients, with far more efficient use of limited health care resources,” Dr. Peltekian says. “If patients have not met their weight-loss target after nine months, then we proceed to liver biopsy and work with them more intensively. Our goal is to prevent fatty liver disease from advancing to liver failure.”

The only treatment for liver failure is liver transplant, but the availability of healthy donor livers is declining as rates of fatty liver in the general population rise.

“More patients with end-stage liver failure are dying while waiting for a donor liver, in part because more and more of the livers that come available are too fatty to be viable for transplant,” says Dalhousie surgery professor Dr. Ian Alwayn, who is also the QEII Foundation Endowed Chair in Transplantation Research and surgical lead of the Multi-Organ Transplant Program at the QEII. “Fatty livers don’t function well after transplant, so we often can’t use these organs.” 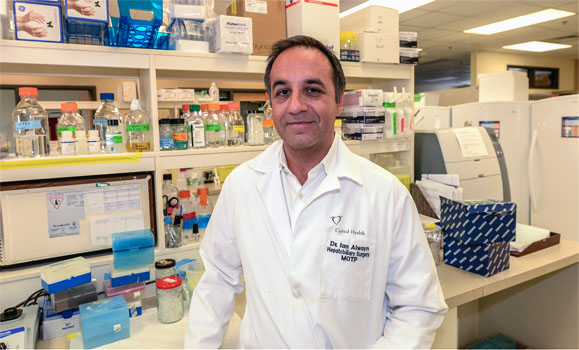 Dr. Alwayn and his research team are looking for ways to make fatty livers more suitable for transplant. They’ve invented a new technology that allows them to infiltrate the liver with protective agents, so it can better withstand the injuries that take place during the transplant process. “If we can protect fatty livers from these injuries, we will be able to use a lot of organs that would otherwise not be suitable for transplant,” Dr. Alwayn says.

Dr. Alwayn is also exploring the possibility of de-fatting fatty livers prior to transplant, with Dalhousie lipid scientist, Dr. Neale Ridgway. They’re co-supervising a second-year medical student, Melissa Wallace, on a project to see if their experimental system for metabolizing fat in the donor liver prior to transplant can help the organ function well after transplant.

Out of the shadows

Non-alcoholic fatty liver disease is now the most common form of liver disease in Canada and part of a larger liver-disease epidemic. According to the Canadian Liver Foundation, deaths from all forms of liver disease rose by an astounding 30 per cent in eight years prior to the 2013 release of its report, Liver Disease in Canada: A Crisis in the Making. In its report, the foundation calls for a national liver-disease strategy, or “liver disease will continue to strike from the shadows taking lives and exacting a high toll on the nation’s health care systems.”

“There is a stigma around liver disease, because it has so long been associated with alcohol abuse,” says Dr. Peltekian. “We need to shed light on the many causes of liver disease and  help people understand how important it is to get to a healthy weight to reverse or avoid fatty liver disease. It’s not easy but it can be done!”