This March marks the 100th anniversary of the death of James Robinson Johnston.

Despite living only 39 years, the man left an impressive legacy in his hometown of Halifax. He had become the first Black Nova Scotian to graduate from Dalhousie and also the first Black Nova Scotian to be called to the province’s bar as a lawyer. He had been a community leader, a prominent lawyer and served his church as clerk and Sunday school superintendent. Little wonder, then, that an enormous crowd attended Johnston’s funeral, with people lining the streets between Cornwallis Street United Baptist Church and Camp Hill Cemetery to pay their respects.

A century after his passing, Johnston’s story will be brought to life as part of a new project called Black Halifax. Launching later this year, Black Halifax will be an interactive website that allows visitors to tour a virtual map of Halifax and connect stories from the city’s history with their physical location through a series of video vignettes. Each video reenacts key moments in the lives and experiences of notable African Nova Scotians.

The project’s subjects include personalities such as lawyer Rocky Jones, boxing phenom George Dixon and civil rights activist Viola Desmond, the honouree of Nova Scotia’s first Heritage Day next week. Ms. Desmond’s Black Halifax video will be launched at the North Branch Library on Monday (February 16) as part of the Heritage Day celebrations.

If Black Halifax is bringing Johnston back to life, so to speak, his legacy is already alive and well thanks to the work of the Dalhousie chair that bears his name. The James R. Johnston Chair in Black Canadian Studies at Dalhousie is one of several partners in the Black Halifax project, and it’s a project that the chair’s current occupant, Dr. Afua Cooper, is incredibly excited about.

“It’s the sort of interactive project where I hope to take more of my work in this context in the future,” she explains. “It’s linking important stories with the city and its history and geography.”

It’s been a little more than three years now since Dr. Cooper took over the James R. Johnston (JRJ) Chair, which was first established in the 1990s. Prior to her arrival, the chair was dormant for four years after its occupant, David Divine, had to step down following a serious motor vehicle accident.

Dr. Cooper, a historian, poet, and creative writer whose research focuses on slavery and the abolitionist movement in Canada and beyond, was tasked with reanimating the chair’s mandate, which encompasses teaching, research and public outreach.

“This is the only Black Studies chair in all of Canada, and it’s a national chair,” she explains. “It’s important because it recognizes the significance of Black Canadians — their history and their culture. And that history begins here in Nova Scotia in the early 17th century.

"I think Dalhousie has a crucial role to play, by hosting and supporting the chair here, in recognizing the presence of Black Canadians and their contributions to this city, the province and the country. Having the chair here offers a sense and worth to Black Canadians that their lives matter, that their history is important, and their contributions to society are important.”

She began her work as chair by reaching out to key individuals and groups — not only at Dalhousie, but across the Black community in Nova Scotia. Those relationships have been a key part of helping turn the chair’s mandate into reality.

“I see myself as a public intellectual, as an organic intellectual,” she says. “So I don’t see my work as something that stays within the academy; it has to be shared. So I’ve always been involved in the community or public outreach of scholarship. I see my scholarship as a kind of activist scholarship.” 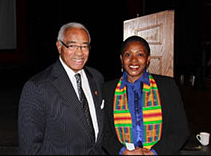 In her first year, Dr. Cooper launched the James R. Johnston Chair Lecture Series, which has figured such speakers as Wilfrid Laurier University professor Carol Duncan, Senator Donald Oliver (left), the late Rocky Jones, British scholar, Hakim Adi and Dalhousie’s own Dr. Isaac Saney. The chair also hosts workshops and conferences, including a Black Studies conference at Brock University two years ago, and a workshop to mark the bicentennial of the War of 1812 and the role of African Canadians in the war held partnership with the Black Cultural Centre and the Canadian Museum of Immigration at Pier 21. On the research front, Dr. Cooper continues her work on slavery and abolitionism, with plans on completing a book on slavery and the law (emphasizing the Maritimes) before her time as chair is up.

Dr. Cooper also teaches two courses at the moment: one on social movements, with an emphasis on the civil rights movement in Canada and the United States, and the other on colonialism and the body.

“It looks at the body, the human body in history,” she explains. “I engage with the topic of colonialism to see how colonialism has shaped our understanding of the body, particularly the black body, and how such understandings have changed in the past two centuries”

A busy, eventful year ahead

Two-thousand-and-fifteen is primed to be a big year for the JRJ Chair. In addition to the launch of Black Halifax, the chair is hosting the second biennial Black Canadian Studies Association Conference at Dalhousie from May 21-24. Following the first conference two years ago at Brock, this year’s theme is “Community, Empowerment & Leadership in Black Canada.”

“It’s not just leadership in the narrow sense of politics leadership,” says Dr. Cooper, explaining the theme. “It’s leadership in education, leadership in sports, in arts and culture, youth and leadership, women and leadership… The idea is to take [leadership] away from the image of one man or one woman out in front and everyone follows that person; leadership has to come from each individual. How do we ignite leadership within ourselves and have a collective form of leadership?’ We want to showcase Black Canadian leadership from a variety of perspectives, including a global perspective."

The conference will thus be local, national and international in scope. Already, participants are coming from Germany, the United States, Brazil, Australia, Nigeria and Jamaica.

The topic of leadership and community for the conference ties in directly with the activism of James R. Johnston as Halifax’s premier black leader in his time.

Dr. Cooper is also working with partners across Dalhousie in developing a Black Studies minor program at Dal that will be multidisciplinary, encompassing courses from several different departments.

The JRJ chair currently lives within the Faculty of Arts and Social Sciences, but it has moved across the university throughout its 20-plus year history. Dr. Cooper’s successor may be from Medicine, Management or another Faculty, but what she hopes they inherit from her is an ongoing dialogue with communities at the university and beyond.

She uses, as an example, last fall’s lecture by Social Work Professor Wanda Thomas Bernard. Titled, “Killing Us Softly,” the lecture explored the health impacts of racism in Nova Scotia. The lecture was well-received, and it left the audience eager for more opportunities to engage with the subject. Audience members informed Dr. Bernard of this, and she in turn created a full series of events (panels and lectures) informed by racism and mental health, taking place this term.

“I want the next chair to inherit a conversation,” she says. “What I hope to leave for the next chair is a sense of continuity, and to have a structure of support in place that a new chair can put his or her own stamp on.”

For information on the JRJ Chair, and the Black Halifax project, contact Dr. Cooper at: afua.cooper@dal.ca. For conference registration, write to: bcsa15@dal.ca.