New course explores the end of the world

The end of the world has arrived at Dalhousie… or, at least, the course on it has.

“The End of the World – From ‘Apocalypse’ to ‘Zombies’” is a brand new course at Dalhouse this term taught by Vincent Masse, associate professor in the Department of French.

“It is a fashionable topic nowadays,” says Dr. Masse.

The course was inspired by continued interest in popular fiction about the apocalypse, zombies and related phenomena. Dr. Masse saw an opportunity to connect our modern fascination in these subjects with their historical legacy: “I am trying to get students interested in old texts by starting with something they know.”

Though listed under Department of French (under clever course number FREN 2666 — the number of the beast!), the class is taught in English and has no prerequisites; it’s also open to students from any Faculty. 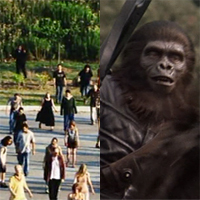 The class focuses a great deal on French texts — ones translated into English — and compares apocalyptic texts ranging from the oldest mention of the world’s end 2,000 years BC right up to modern zombie films. The syllabus includes films ranging from 12 Monkeys to both versions of the zombie classic Dawn of the Dead, with readings that include Pierre Boulle’s Planet of the Apes, Jean-Baptiste Cousin de Grainville’s The Last Man, and even the Bible.

“It’s a trap,” Dr. Masse says, with a laugh, of his course’s name. “You have zombies in the title, but we also include the Book of Revelation from the Bible.”

Dr. Masse, who developed the idea for the course two years ago, specializes in medieval and early modern literature. His postdoctoral research at Paris-Sorbonne (Paris IV) focused on the 16th-century French author Guillaume Postel, who was continuously convinced the end of the world was only a few months away.

He hopes students take away from the class how our modern interpretations of the end of days are often based on much older ideas. He cites the work of Agrippa d’Aubigné, a French poet who was famous for writing about the civil wars in late 16th-century France, to convey his point.

“The descriptions of the war are so over-the-top that so-called gore movies from the 21st century could learn something from the text,” says Dr. Masse. “People don’t expect that people in the 16th century would write and enjoy something like that.”

The course has proven quite popular, attracting students from very different academic backgrounds. And while it’s true the students are studying the end of the world as they know it, they apparently feel fine about it.

“I see people smiling during the class, so that’s a good sign,” says Dr. Masse.