The students, each selected as standouts from their respective institutions, vied for cash prizes and a spot in the national competition at the end of May. Dalhousie Psychology student Thérèse Chevalier, who won Dal’s competition back in March, represented the university, presenting her research on using magnetic stimulation on the brain to consider the potential of learning a second language as an aphasia treatment.

Prior to this year, Three-Minute Thesis competitions were only held at individual schools, but this year the Canadian Association for Graduate Studies has brought schools together to organize both regional competitions and a national showdown. Dalhousie’s Faculty of Graduate Studies stepped up to host the Eastern event, featuring contestants from universities in Quebec and Atlantic Canada.

As with the Dalhousie competition, the students at the Eastern Regional Competition were judged not on their research, but on communication style, comprehension and engagement of the audience. This both highlights the goals of the competition and puts entrants from all fields on equal footing.

Each candidate put their best foot forward in three short minutes, knowing their performance would determine not only who would advance from the regional competition, but who might prevail at nationals. The national competition will be a virtual one, based on the videos of the top performances from each region.

A showcase of ideas

The presentations covered a range of topics, from a variety of disciplines. Emerging in first place was Kirk Luther from Memorial University, who presented his research on the impact of police interviewing techniques on the reliability of evidence from children. Beyond impressive communication skills, Luther’s presentation conveyed a commitment to engagement and practical application outside the competition.

“The reality is that sometimes children are the only victims or witnesses of crime,” Luther explained. “My research is helping change the way police officers interview children… my goal is to enhance child interviewing practices all across the country.”

Second place winner Sherin Al-Safadi’s research also had clear practical application, drawing connections between the human circadian and stress systems. “We know a lot about these systems individually, but what we don’t know a lot about is the cross talk between them,” the Concordia University student told the audience. “Wouldn’t you like a good night’s sleep during stressful times without having to count more sheep?”

Third Place winner Kyle Massia from Saint Mary’s University analyzed the significance of Ampelmann, the East German crosswalk symbol turned cultural icon. “In the transition from state socialism to western capitalism many aspects of the past were left behind; one of these was Ampelmann,” says Massia. “By the mid-90s, attitudes towards the old East German state had changed and Ampelmann was brought back… East Germans began to remember their past differently. Now their old state could appear friendly, creative, and safe.” 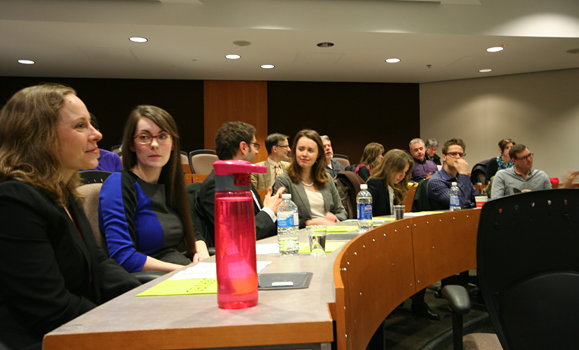 The top three competitors will all move on to the national competition, the results of which will be announced on June 12. Dalhousie’s Thérèse Chevalier was also named an honourable mention at the event.

Judging the finalists' videos for the national prize will be John Polanyi (Nobel Laureat and University of Toronto Chemistry professor), Kady O’Malley (CBC journalist) and Noreen Golfman (president of the Canadian Association for Graduate Studies).

The importance of the underlying theme of the competition touched on by organizers, judges and competitors alike.

“We need to get out there — out of academia — and get the word out,” Luther commented after the competition. “It’s about the application, talking to the people that the research can help, in an accessible way.”