State of the Dal workplace

A look at the 2013 Workplace Survey results

If you’ve paid attention to Dal’s Workplace Surveys over the years, you may not find much that’s particularly surprising about the 2013 edition.

The top-line results have been reasonably consistent each time Dal has gone out and asked faculty and staff to weigh in on their work at the university. In 2009, 2011 and now this year, approximately three-quarters of them say they’re satisfied with their jobs, and all but a very few say they are proud of the work they do at Dal. 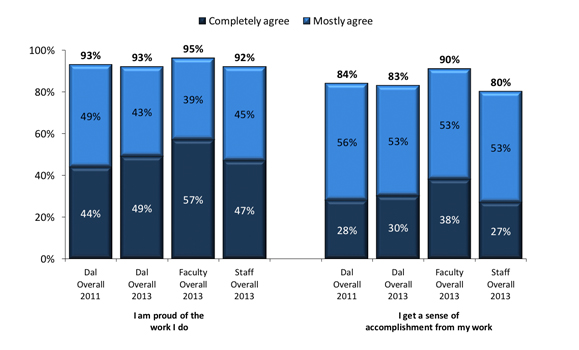 “Our community, in general, is happy with the workplace overall,” says Katherine Frank, assistant vice-president of Human Resources.

“Despite our challenges — and the survey points to several of them — people say they’re proud to work at Dal and they get a sense of accomplishment from their work. There’s adversity in our workplace at times, but people really find meaning in their work and stay engaged.”

The challenges she refers to have also been somewhat consistent across the surveys. Dal faculty and staff say they want to see more recognition for the work they do; they want a better understanding of Dal’s strategic direction, and they’re seeking more opportunities for career growth and advancement. “Those have been common themes, three surveys in a row,” says Frank.

Frank says that, in the past, Dal’s approach to addressing issues raised in the survey has tended to be somewhat in isolation: reviewing or expanding select programs in HR or elsewhere on campus. (For example, Dal is nearing completion of a Hazardous Materials Building Survey — due to be wrapped up in 2014 — guided in part by concerns about workplace safety from previous surveys. Another initiative has been a new standardized leadership profile for use across the university.)

This time around, her team is shifting its focus towards better supporting the individuals who can best make improvements in a number of areas: campus leaders across the university.

“We’re a large, diverse community, and the experience in one faculty or department can be very different than another,” explains Frank (pictured, left), who notes that while the overall numbers may look consistent, or show slight movement in one direction or another, there’s a lot of variation in how the results look across campus.

“In that sort of environment, the best way to enact change is for our campus leaders — deans, VPs and AVPs, directors and department chairs — to take charge of these issues, take ownership of their survey results and work to make improvements.”

While the summary results of the survey have been shared with all faculty and staff, Dal’s deans, VPs and AVPs receive a detailed breakdown of the results for their area of campus. Campus leaders with more than 30 respondents have also been provided with a new tool from Corporate Research Associations (the company that administers the survey) allowing them to slice and dice the data along numerous data points — age, gender, length of time working at Dal — while maintaining the confidentiality of individual responses. (They can’t analyze factors smaller than 10.)

From there, Dal’s HR team offers to work with each of them to discuss how best to address the issues raised in their particular unit.

“It may mean going in and doing presentations to start the conversation, or sitting down with a team in a particular unit that’s taking ownership of the survey results and working on a plan,” says Frank. “In other cases, a unit may come up with a plan on its own and then come to us looking for assistance in implementing it. There are a lot of different variations.”

What’s promising, according to Frank, is the interest she’s seen from campus leaders in this year’s survey.

“It’s the first time they’ve been asking for them with this much enthusiasm. It tells me that leaders are really starting to pay attention and take ownership for their results. It’s being seen as a Dalhousie-wide initiative, not just something out of our Human Resources office. That’s really encouraging.”

Frank has high expectations for Dal’s leaders in responding to the survey, but says everyone at Dal shares some of responsibility to start conversations about improving the workplace.

“I hope individuals see their responses reflected in the results, something that resonates with what they’ve told us. And I hope they engage with their leaders and are willing to work with them to generate solutions. If it’s not on the agenda for a regular staff or council meeting, I hope they’d ask those questions and push for a discussion among their group or with their leader about it. They should be asking, ‘What are we doing about our results and what can I contribute to making this a better workplace.

See the complete summary results of the Workplace Survey. [PDF]