Syria: not a world away

This is the first article in a new, ongoing series here on Dal News focusing on international voices in our community. We begin with Mohamed Assem, Biology student and residence assistant in Shirreff Hall.

Mohamed Assem sits in the early morning in Dalhousie’s Student Union Building in a blue and grey striped sweater, speaking passionately about his love of school.

"I never want to stop learning,” he says, “I hope to enter graduate studies and do research one day because I find that research is the best way to achieve this.”

Talking with him, it isn’t difficult to identify where this passion for higher learning stems from. His grandfather had paralysis, and was immobilized a year before he passed away. “If I could get into medical research to help people who suffer from this, I would be very happy. It really hurt me seeing him like this as he had always been a very active person,” says the second-year Biology major.

Mohamed moved to Halifax last fall from Aleppo, Syria. The ancient city is a United Nations Organization for Education, Science and Culture world heritage site, as it served as a crossroads for trade routes for millennia. Today Aleppo is more commonly known as the battleground where rebel forces are fighting President Assad’s troops for control of suburbs. The ongoing civil war in Syria is now entering its 32nd month.

For Mohamed, the decision to pursue an academic career in Canada was made as a high school student.  “At home I went to an international school and all my really good and favourite teachers were Canadian.”

“I applied to Canadian universities and got accepted, but Dalhousie caught my eye because it has a high ranking on the global scale; it has reputable research facilities and it’s not too big. Dalhousie is the perfect size.”

Dalhousie’s location was also an added bonus for someone who loves the outdoors. “When I get stressed I go to the sea,” says Mohamed.

He admits he did have some difficulty adjusting to life in Canada, at first. “I was on the other side of the globe so my sleeping pattern was a bit difficult to arrange. That was a challenge,” he says.

Homesickness also rolled in. “I am really close to my siblings and parents,” says the brother to two. “My little sister is my best friend; I call her my little best friend. I talk to my family about everything to get their opinion. I now have access to their advice and hugs less often.

“You take this for granted at home, and when you move away you realize how much an important part they are of you,” he says. 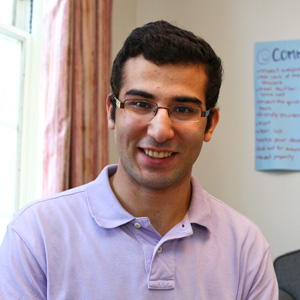 However, Skype dates with his parents and exchanging emails and Facebook messages with friends to see how they are doing back in Aleppo have helped him stay in touch with news at home and remain connected to their lives. Occasionally listening to Arabic music also helps him feel less homesick.

“I like being here in Halifax,” says Mohamed. “I am starting to get used to Halifax now. I like the people here, they are very tolerant, everyone is trying and willing to help you and that makes things easier as an international student.  People are really friendly. Even complete strangers have made me feel comfortable.”

Getting the most out of university

As a person who naturally loves meeting people and finding opportunities for conversation, he loves the diversity Dalhousie has to offer. “As an Office Assistant at the International Centre, I’ve met people from the Bahamas, Nigeria, India and all over the world and it’s nice to listen to their stories. You learn a lot when you listen to people from many different places.”

Mohamed currently works on campus as a Residence Assistant (RA), and understands the importance of RAs for new students. “When I first arrived, I was involved in all the activities that my RA would organize, like floor dinners. They were very accessible and made me feel comfortable.”

“I remember participating in a curling tournament where I was on ice for the first time, and I don’t think I went through a match without falling,” he says with a laugh.

Mohamed’s advice to new students is simple and practical: “Go to an event, go to as many events as possible. Try as many things as possible and step out of your comfort zone. You have time to sleep and watch TV later; this is your opportunity to meet new people and grow.”