Japanese poet Ryunosuke Satoro wrote, “Individually we are one drop. Together we are an ocean.”

Satoro’s point is hard to dispute after reading the resumés of Dal Biology faculty members Boris Worm and Heike Lotze.

For 17 years, the husband and wife duo have worked in partnership to further our understanding of the world’s life-giving ocean systems. Last month, at a ceremony in Washington D.C., their accomplishments were recognized with the Peter Benchley Ocean Award for Excellence in Science.

“It’s the first time we’ve won a prize as a couple,” says Dr. Lotze with a smile. “It recognizes that we work well as a team.”

“We’ve won awards individually before, but we’ve sometimes felt uneasy about that,” adds Dr. Worm. “Often our ideas come from discussions we’ve shared and it’s strange when one of us wins an award for our joint creativity.”

The couple met as graduate students at Dal’s sister institution in Kiel Germany, which was then known as the Institute for Marine Sciences. (Today it’s the GEOMAR Helmholtz Centre for Ocean Research). Drs. Lotze and Worm exposed each other to different perspectives on research.

“Boris comes more so from basic experimental ecology and I’m interested in applied research,” explains Dr. Lotze. “I want to solve real-world problems and find solutions with my work.”

“I’m interested in theory and patterns, but Heike has influenced me to think about environmental problems as well,” explains Dr. Worm. “Taken together, we both tend to look for big patterns, then identify problems and solutions. It’s like piecing together a grand puzzle.”

Together, their work has reached a broad audience, helping bring marine conservation into public dialogue. Well known to academics, media, students and the public, the pair brings a human face and a dynamic voice to oceans issues.

Inspired by the ocean

With years of highly cited work under their belts, it’s difficult for Dr. Lotze and Dr. Worm to choose the accomplishment they’re most proud of, but two stand out: Dr. Lotze’s work in marine historical ecology as part of the Census of Marine Life and Dr. Worm’s “Rebuilding Global Fisheries” paper.

The Census of Marine Life was a 10-year international effort, engaging 2,700 scientists from around the world to assess the diversity, distribution and abundance of marine life — a task never before attempted on such a large scale. The scientific results were reported on October 4, 2010 at the Royal Institution in London.

As part of her contribution to the census, Dr. Lotze led a multi-disciplinary research project looking at estuarine and coastal transformation and its dramatic acceleration over the past 150 to 300 years. Across 12 diverse and once-productive estuaries and coastal seas, the research found that human impact had depleted more than 90 per cent of important species, destroyed more than 65 per cent of seagrass and wetland habitat, degraded water quality, and accelerated species invasions. While 20th-century conservation efforts achieved partial recovery of upper trophic levels, they failed to restore former ecosystem structure and function. 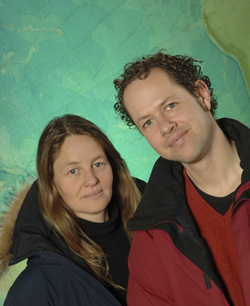 Dr. Worm’s “Rebuilding Global Fisheries” paper analyzed trends from a global fisheries and conservation perspective. The paper revealed that, in the surveyed fisheries, the average exploitation rate had recently declined and was at or below the rate predicted to achieve maximum sustainable fish yield. But the group also found that 63 per cent of assessed fish stocks worldwide still required rebuilding, meaning that they had been depleted to a point where their productivity was compromised.

The group outlined strategies to achieve sustainable fisheries by combining diverse management actions, including catch restrictions, gear modification and closed areas. They also noted that impacts of international fleets and lack of alternatives to fishing complicated prospects for rebuilding fisheries in many poorer regions. This highlighted the need for a global perspective on rebuilding marine resources.

Reflecting on their success, Dr. Lotze says, “We bring together people with different expertise and come up with a solution together . . . new methods and perspectives often come out at the interface of different disciplines.”

She extends equal credit to their broader community of scholars as well. “Without our collaborators, none of this would have happened.”

Remembering the past, planning for the future

The couple’s connection with the sea dates back many years. Growing up on a farm near the ocean, Dr. Lotze was interested in life on land, but hungered to discover what lied beneath the waves.

“I wanted to do something with animals and plants,” Dr. Lotze recalls. “The sea was always in the back of my mind.”

Dr. Worm’s galvanizing moment came during a volunteer work term with the Sierra Club of Canada. He saw orcas cutting through the water and was immediately hooked on the ocean.

“I wanted to know how people influenced marine life,” Dr. Worm explains. “It was incredibly fascinating to me.”

The couple’s enthusiasm for marine science has grown with time, and they plan on researching and teaching for as long as possible.

Dr. Lotze is currently working on the long-term recovery of formerly depleted sea animals, studying the importance of coastal vegetation, and growing public awareness of ocean issues. Dr. Worm is hoping to improve Canadians’ ocean literacy by speaking regularly on CBC’s afternoon show Mainstreet and writing a book on marine biodiversity set for release in 2014. The duo also looks forward to teaching at Dal come January 2014.

When asked, “Why is it important to protect the coasts and ocean?” Dr. Worm responds without missing a beat.

“Because the ocean is our life support system.”

Dr. Lotze nods in agreement. There’s nothing more to say.