VP finance and admin on the state of Dal's pension plan

Dalhousie is looking to make changes to its pension plan structure to achieve solvency relief from the provincial government.

This week marks the kickoff of a new series of pension town halls – an opportunity for members of the Dal community to hear from Ken Burt (vice-president finance and administration) and Katherine Sheehan (assistant vice-president, Human Resources), and to share their own thoughts and concerns regarding solutions to address the university's pension situation.

In advance of the town halls, we sat down for an in-depth interview with Ken Burt to get an update on the Dalhousie pension plan, the options moving forward and where the process of revising the university's pension plan structure is at this juncture. 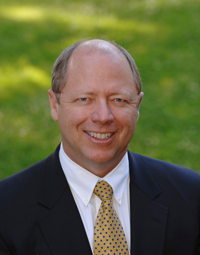 Between bargaining updates, town halls and Dal News coverage, it seems like the university community has been discussing pensions in detail for some time now. What is the current financial state of the pension plan?

Our last formal actuarial valuation was in March of 2010. So we’re now halfway towards our next valuation, which will be in March 2013.

According to provincial regulations, our pension fund has to meet a solvency test – that means that we need to have enough money in the fund so that, if we were to close tomorrow, we’d have enough to pay out all benefits owed to plan members.

In March 2010, our deficit to meet our solvency obligations was approximately $129 million. And up until this June, we were pleased with the market performance, with double-digit returns in our investment funds, both the RTF [Retirees Trust Fund] and PTF [Pension Trust Fund]. We’d seen a lot of recovery since the ’08 downtown.

However, the most recent update we’ve received from our actuary is that because of the decline in interest rates and increasing instability in the market as a result of the Greek financial crisis and other issues, as well as the growth in our liabilities—general salary increases and so-forth—our solvency deficit has grown to about $270 million.

In short: we’re in a lot worse situation than we were in March 2010.

I’m sure some will look at that increased deficit and think, ‘Couldn’t the university have done something to prevent that?’ How do you respond to that?

The problem really isn’t Dal’s, except in the sense that we’re part of a global economy. It’s a very stressful time, financially, around the world. When the economy goes through this kind of stress, with central governments reducing interest rates to record lows to provide cheap capital to get the business side of the economy running, to encourage investments to recover, our ability to meet our solvency requirement becomes extremely challenging.

Solvency requirements are something that governments put in place to protect employees, but they’re designed for a more normal business cycle – not several years of economic turmoil without a recovery, like we’re seeing right now.

But Dalhousie has been seeking relief from the provincial government from having to meet that solvency requirement, correct?

Yes, especially given that we’re not going to be closing anytime soon.

We did receive relief from the government for this year and next; had we not, we’d been looking at upwards of $7 million in annual contributions. Now, if we were to file an actuarial valuation today, with the increased deficit, without relief, the pension funding requirements would increase by approximately $40 million annually. [Ed. note: this paragraph was updated for clarity]

What the provincial government has told us is that we need to take action to make our plan more sustainable. This cannot be done without our employee groups. We’re confident that revising our pension plan structure to move from its current employer-sponsored model to a jointly-trusteed, jointly-sponsored one will enable us to receive that solvency relief on more of an ongoing basis.

Similar models exist in other jurisdictions in the country: Ontario, Alberta, B.C. and Manitoba. And it is likely the Nova Scotia government will be following those leads.

So where is that process at right now? I know that the Board has directed the university to lobby for solvency relief, so what is happening on that front lately?

We know the government is working on this; they were actually going to table parts of the legislation last spring, and we are anticipating that parts of it will be tabled this fall.

However, since then, the government has asked Dalhousie to partake in some working group sessions with a number of other defined benefit pension plan experts from across the province to discuss the issue generally. In addition to the executive directors of those other large defined benefit plans, the working group included a representative from the Nova Scotia Federation of Labour Pension Committee—who also was also part of DCoPS and ACoPS committees at Dalhousie as the NSGEU rep—and a pension lawyer who has represented the DFA on pension issues, and who is currently the DFA representative on both the Dalhousie Pension Trust Fund and Retirees Trust Fund. Dalhousie was well represented in these discussions.

We intend to do everything we can to ensure that any future legislation on pensions that comes from the government provides solvency relief to universities.

But then why aren’t we waiting until the legislation is completed before moving ahead with proposed changes to Dal’s pension governance model?

There is no need for legislative change to support the plan model that we are proposing. Also, even if we were to have a proposed deal with our employee groups today, fully documented, with all the details ironed out it could still take a year and a half to process. It has to be brought through the Pension Advisory Committee, the employee groups then have to accept, the Board has to approve it and, finally, it has to go to the superintendent of pensions with the provincial government for filing.

Remember that we’re working towards a deadline of March 2013; if we don’t have solvency relief from the government by then, we’ll have to begin making dramatic payments into our pension plan. So you see why it’s important that we get moving and working on this together, today.

Let’s go back to the idea of a jointly-trusteed, jointly-sponsored plan. For those who haven’t been following the pension issue closely, what does that proposed change mean?

In terms of the plan itself, it doesn’t change any of the benefits that the members are entitled to. The formula would be the same: two per cent times your average best three years’ salary, times the number of years of employment, to a maximum of 35 years. It remains a defined benefit plan.

Jointly-trusteed, jointly-sponsored plans are really a different governance structure or, if you like, a different ownership structure. In the current Dalhousie plan, the plan is owned by the university. In a jointly-sponsored plan, the plan is owned by both the employees and the employer. So all of the decisions, the organization, the investments and any changes that would be required are the responsibility of both the employees and the employer. And with that, of course, comes different funding obligations, and it’s assumed that the employee and employer funding amounts are dynamic and represent a risk-sharing model in terms of the plan governance.

So essentially, the employees get a more direct control of the pension plan than what they have presently in the Dal model.

It seems like Dalhousie has been talking about changes to its pension plan for some time, though, and there has yet to be buy-in from all of the university’s employee groups. Where does that process sit?

We’ve completed a series of important pension discussions with our employee groups. We have a very good understanding of the problems with the current plan structure. We’ve actually developed a jointly-trusteed, jointly-sponsored pension plan proposal, but we haven’t filled in any of the blanks. However, we have the framework to work from.

What goes into the blanks—the details, the nuts and bolts—becomes a labour relations concern. Right now, we’re in the collective bargaining process with three of our employee groups, and pension considerations are on the table.

These are important talks. Because if in 2013, if we don’t have an agreement with the employee groups, and the economy hasn’t recovered, we’re going to be responsible for our solvency payments. If we are not moving towards a workable solution, we’ll have to begin to create a contingency fund to make those payments, and there will be a direct hit on the operation of the university on top of any changes in provincial government funding.

Given that there is not yet a new pension agreement, and that the pension deficit has actually increased, do you feel less confident about this process than you did a year ago?

No, we’re about where I expected us to be. I am disappointed by what’s happened in the markets, certainly; you don’t have to go very far to see that the world is in rough financial shape. It is frustrating that we’re not yet into an economic recovery cycle.

But in terms of our process, our work towards changing our pension plan, it’s about as expected. There’s no question there’s a lot of heavy lifting to do, and a lot of information and proposed changes for everyone at Dal to process.

That’s why we’ve been doing so many of our town halls, to make sure people have a chance to hear from us and to share their own perspectives on the subject. We’re not sitting in a back room trying to solve this problem, because I don’t think the university can solve this on its own without help from employee groups.

So that’s the approach we’re taking: we think that both the employees and the employer have the same interest at heart here, and we have to work together on a solution.

The Oct. 15, 2011 edition of the Chronicle Herald contained an opinion piece on defined benefit pension plans overall and referenced our pension plan specifically. The piece provided some worthwhile context to the pension situation, but it did contain several inaccurate comments related to our pension plan. We have addressed these inaccuracies below. The quotes from the Herald piece precede the corrected information.