Department of Chemistry Faculty of Science 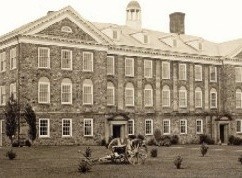 The Science Building is shown in an old postcard. Note the cannon on the front lawn. 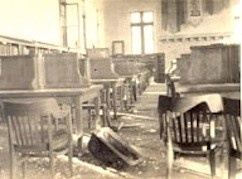 The blast from the Halifax Explosion also damaged the MacDonald Library next door.

Construction of the science building (the present chemistry building) began in 1912, and was occupied by chemistry, physics, geology and engineering in 1915. This building could tell many a tale: for example, the building suffered extensive damage from the Halifax Explosion in 1917.

Other disciplines had moved out of the science building earlier, and in 1960, physics moved to the Dunn Building, leaving chemistry in the present building. During 1964-65, a link between the west-end of this building and the Macdonald Library was constructed. During later years, chemistry facilities were also located in the Life Sciences Centre, the Dunn Building and a house on University Avenue.

In 1985, a $9.8 million extension and renovation of the Chemistry Building began. The first phase was the addition of 2,000 metres (20,000 square feet) of well-equipped, new undergraduate laboratories (the Podium) on the north side of the building. This facility was opened in October 1988, providing among the most modern undergraduate chemistry laboratories in North America. This addition freed up room for the second, and somewhat more difficult task — the renovation of existing space to provide modern research laboratories housing all Dalhousie Chemistry facilities (with the exception of SLOWPOKE) in a modern building with traditional charm.

The first honours graduate in chemistry at Dalhousie was Ebenezer MacKay, who graduated in 1886 with first-class honours in experimental physics and chemistry. He returned to Dalhousie in 1896 with a PhD from Johns Hopkins University to become the second professor of chemistry following the death of Professor Lawson in 1895.

The first postgraduate degree was a Master of Arts degree conferred upon James Forrest in 1871 for a thesis entitled "The Science of Chemistry, Its History and Progress." Eleven other Dalhousie BA graduates received MA degrees between 1871 and 1934. In 1904, the first Master of Science degree was awarded to W.H. Ross but research in chemistry did not flourish until a few years after the arrival of Carl C. Coffin in 1930. In the Proceedings of the Royal Society of Canada, E.W.R. Steacie wrote in 1954 following Coffin's premature death, "Coffin had a great influence on the development of Canadian chemistry, and in particular on the development of scientific research at Dalhousie. In recognition of his attainment, he was elected a member of the Royal Society of Canada in 1935 at the early age of 32."

When the Department of Chemistry received approval to start a PhD program in 1960, the number of accepted MSc theses was only 62 after more than a half century. The first PhD in chemistry was conferred upon St. John H. Blakeley in 1964. Approximately 500 alumni have received their MSc and PhD degrees from the department. This number continues to increase by about 15 each year.

In the fall of 2012, we celebrated 100 years since the laying of the cornerstone in the Chemistry Building at Dalhousie University.