Building a better world with the knowledge of Indigenous peoples

Posted by Andrew Riley on January 13, 2022 in Research, News 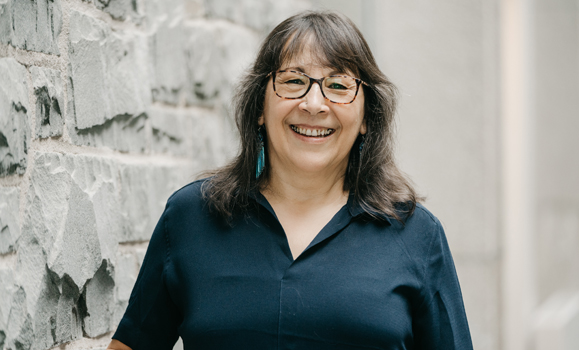 The objective of the project, says Dr. Pictou, is to increase the influence of Indigenous people on policies and projects that directly impact and connect their well-being and the biodiversity of their environments. (Provided photo)

So, she went. And after a few days of camping out and tracking the massive animals in Unama’ki (Cape Breton), Nova Scotia, she witnessed the shooting of a moose. She describes the process of her cousin transforming the “wonderful being” into food and the reverence and ceremony that attended the process.

“As he was doing that, he would say, ‘Well, there's the neck that we use for mincemeat.’ And then he would say ‘There's some ribs for so and so. There's a roast for so and so,’ and I realized he was talking about the gifting of food. The whole experience fundamentally changed my life. The amount of work that goes into that, the connectivity, the community. It’s amazing.”

She says dividing and freely sharing the moose as food gave her a deeper understanding of her L’sɨtkuk community’s treaty rights, and more so, how they were not always aligned with the perspectives of non-Indigenous governments, communities and organizations.

Dr. Pictou, who is cross appointed to the Faculties of Law and Management, says it is this kind of experience that underlies her research and informs the foundation of the $24-million project that the Government of Canada announced Wednesday will receive support via its New Frontiers in Research Fund. Provided through the Transformation stream, the funding is designed to support large-scale, Canadian-led projects that address major challenges and promise real and lasting change.

The project, titled Ărramăt and led by Dr. Pictou, four co-principal investigators, and lead principal investigator Brenda Parlee, a professor at the University of Alberta, will involve more than 150 Indigenous organizations, universities and other partners. Activities will occur in 70 ecosystems around the world that are spiritually, culturally and economically important to Indigenous Peoples.

“We need to ask two questions,” says Dr. Pictou. “What are Indigenous perspectives on the stewardship and management of natural resources — our relationship with Mother Earth? And, even more so, what are the perspectives of Indigenous women and gender-diverse persons and how can they be considered in decision-making processes that ultimately impact them?”

The project will empower Indigenous Peoples in countries including Canada, India, Vietnam, Thailand, Uganda, Mali, Brazil and others to address issues such as food security, human-wildlife management and the decolonization of science.

Dr. Pictou says it is an important opportunity to bring forward Indigenous voices and concepts about humanity’s relationship with biodiversity to reveal new and urgently needed solutions. Indigenous groups and organizations will determine what research is required based on what they are experiencing in their own environments.

“We're hoping that this research, while it informs policy and decision-making processes, also has direct impact at the local level. The key to this will be Indigenous-led projects on the ground.”

Dr. Pictou, who received her Master of Arts at Dalhousie returned to the university to study for a PhD after 20 years of working in her community, including service as a Councillor and Chief. She was recently appointed District Chief of the Confederacy of Mainland Mi’kmaq — the first woman to hold the position.

Dr. Pictou says that in her earlier roles, when it came to negotiating relationships with non-Indigenous government agencies and organizations, she often felt like she wasn’t speaking the same language.

“I learned quickly that trying to take on a position of leadership, particularly when working with other governments, populations or corporations that have a conventional resource commodification worldview, it was very difficult to bring our concepts to the table.”

She says this led her down a path to discover and define what her people understood as their treaty rights, rather than the narratives that come from official negotiations or court cases. She discovered that her people’s perceptions of treaties were fundamentally embedded in food security and sustainable relationships. She also came to see that women were playing an important but underappreciated role.

“Towards the end of the process, an Elder said ‘Sherry, do you notice how many women are hunting and fishing now for food?’ That triggered something and made me ask, ‘Okay, where is gender in all of this?’ Not only were Indigenous concepts in general excluded from negotiations, but I also started to think about the absence of gender and how gender comes into play.”

Dr. Pictou says that the objective of the Transformation grant project is to increase the influence of Indigenous people on policies and projects that directly impact and connect their well-being and the biodiversity of their environments. She is also keenly interested in improving the standing of Indigenous women and people from 2SLGBTQIA+ communities.

“That is so fundamentally important because whether you are pursuing conservation or resource exploitation, in both processes Indigenous people are usually displaced.”

But she is careful to note that fully engaging Indigenous people will have much larger benefits for people of all backgrounds around the world.

“My hope is that if you look deeply into Indigenous concepts and practices, there is something fundamental within Indigenous worldviews — this worldview based on a reciprocal, respectful relationship with the ecosystems that we live in — that can inform the way we're doing things and change things for the better.”