Posted by Suzanne Bowness on June 9, 2022 in Students 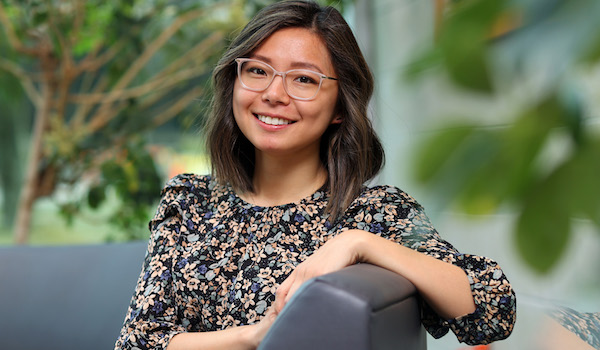 Byungmin Kang is living proof that if what you’re doing doesn’t make you happy, you should keep looking. For Byungmin, the first step in that career fulfilment journey was taking Dal’s direct-entry MPA program.

With a bachelor’s degree in Music Education from Acadia University, Byungmin thought the next logical step was an education degree. But as she got into the program, she found it wasn’t suitable for her after all. “I went to see a counsellor, who identified that I was stressing over how I wasn't enjoying this program. So, we explored options that were more generalized and would offer a more versatile career,” recalls Byungmin.

Her new-found openness made her listen extra closely when a friend mentioned that he was taking the MPA program and having a great experience. “He was in a similar situation as me; he had started a two-year program and then left and went to the MPA, and was loving it,” she says. She went on a backpacking trip in Europe to meditate on what she wanted, and on her return, applied for the program.

Now a graduate and working for the Treasury Board of Canada Secretariat, a job she connected with after a professor shared a posting, Byungmin is glad she paid attention to those feelings that something wasn’t quite right.

In terms of her favourite courses, she says she had never taken Economics and really benefited from learning about it, even taking an elective in international trade policy. “I was really learning and gaining so much perspective about the world that would apply to my current job,” she says.

The first year of the program was entirely online, while the second year was offered in a hybrid format with two courses in person. Byungmin says the opportunity to meet face-to-face added to the experience. “During Welcome Week, there were lots of in-person events and I went to every single one of them,” she says. The in-person classes in second year were on the same day, so students would get together during the break and hang out. “I got to know them really well.”

During the summer of her first year, she landed an internship with the Department of Transportation and Active Transit, where she was also able to go into the office. At the end of that placement was when she received the posting from her professor about part-time work with Treasury Board. She landed one of the positions, along with a classmate. As well as the government experience from her internship, she also credits the program’s professional development course with helping her become interview-ready.

Today Byungmin’s position at the Treasury Board is full time. She works for the External Advisory Committee on Regulatory Competitiveness, a committee that brings together perspectives from businesses, academics and consumers to help remove barriers and improve Canada’s regulatory framework.

Reaching out and finding connection

In terms of advice for other students, Byungmin recommends taking action if you don’t feel aligned with the path that you’re on. Once you feel the energy that comes from being in the right place, she advises taking action to network and get involved, something she did as a student. “From the start, I was part of the Public Administration Student Society. In first year, I was an academic representative, so very engaged with my classmates. That really got me to have conversations with them. I also volunteered for the Institute of Public Administration Canada, and in second year I was vice-president of External Relations, so I got to sit on the board of IPAC NS and also of the Association of Municipal Administrators Nova Scotia,” she says.

Making this effort to interact with people in her new profession helped her continue to focus on finding the pathway that was right for her. “When you talk to as many people as possible, you gain as much perspective as possible. I found out about the wide range of career options that I could have, and was basically forced into talking to different faculty members and public servants. I found public servants to be the most helpful group of people, so I would say reach out to public servants or alumni if you have questions. That's something I would do to really get the most out of the program,” she says.