What it's like to be a Daughter: MPA student in Ottawa 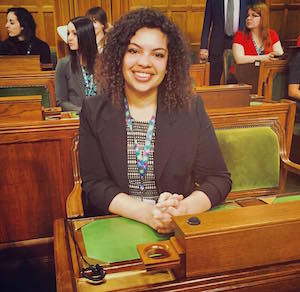 Camille Horton-Poole describes herself as a “government nerd.” The first-year Dalhousie student completed a political science degree before taking up her Master of Public Administration (MPA), and has worked as a page in the Nova Scotia legislature. When a friend told her about an event called Daughters of the Vote, which would see her sit in Parliament for a day, she knew she had to apply.

Daughters of the Vote (DOV) was created by Equal Voice, an organization dedicated to increasing female representation in politics. For International Women’s Day 2017, one woman between the age of 18 and 23 was invited from each riding in Canada to spend a week in Ottawa, learning about the political process and the experience of being a woman in the public service.

The interests that brought Horton-Poole to the School of Public Administration (SPA) also took her to Ottawa for DOV. While she was considering next steps after her undergraduate degree, a professor told her about the MPA program. “I realized that doing a thesis-based master’s wasn’t really what I wanted, but I still wanted a degree that would gear me towards government, particularly in Canada,” she explains. While she applied to similar programs in her home province of Ontario, she had fallen in love with Halifax and Dalhousie and decided to stay. In her studies and otherwise, Horton-Poole is always interested in the “how” of enacting change in public life. “Going to Daughters of the Vote allowed me to develop a different perspective of how government and the public service work,” she says.

Horton-Poole applied for DOV to learn other things as well. “I always want to know more about what people in other parts of the country are facing, and how I can have a hand in fixing those problems,” she says. “I knew it would take me away from school for a week, but I thought, ‘I’m never going to forgive myself if I don’t do this,’” she recalls.

A provincial panel selected the delegates based on submissions in which the applicant was asked to identify problems in her riding and how she would solve them. Asked why she thinks she was selected, Horton-Poole responds, “I guess the issues I talked about resonated with the panel and the ideas I presented made them think I’d be a good representative for Halifax.”

With her avid interest in public service and the government, Horton-Poole was thrilled with the week in Ottawa, especially the day in Parliament. One of the best moments, she says, was just walking through the doors into the House of Commons. “Being a political science student, it was probably one of the best days of my life,” she says. “Being there on the floor was an overwhelming experience.” At times, she says, tears welled up.

The other highlight, she says, was hearing former Prime Minister Kim Campbell speak about her brief time in office. Horton-Poole recounted a story from Campbell: “She told us that when she was prime minister, there was a debate about using ‘le’ or ‘la’ on her French letterhead,” says Horton-Poole. “She said ‘I wasn’t in power for a very long time, but the government never throws anything away, so there’s a stack of French letterhead waiting for one of you.’ To hear the only woman prime minister saying that it can happen and it’s waiting for you, you just have to make it happen—that was just so incredible.”

Some delegates also spoke about their ridings. Horton-Poole was especially engrossed by the young women from Northern and Western Canada. “It was really interesting to hear their stories, what their communities are dealing with,” she says. “It was also impressive to see how diverse the House of Commons was that day. So many points of view are going to be at the table soon, and that will really change how Canada operates in the future.”

During the rest of the week, the delegates participated in workshops and meetings with political figures and public servants, and spent a “leadership day” learning about the barriers to being a woman in politics. After a busy, emotional week, the delegates returned to their ridings, and Horton-Poole returned to class with some new ideas about her future. She has long intended to work in the public service, but not in a political capacity. Being a Daughter of the Vote, though, has made her rethink her intention not to enter politics. “After that week, I think it’s probably going to happen someday,” she says. “When I walked through the doors and I was on the floor of the House of Commons, I realized this could happen, even for me.”

But the road to a political career will definitely start with public service: when she finishes her MPA, Horton-Poole plans to work hard in her adopted province. “I see a lot of potential in Nova Scotia, in immigrant retention, youth retention and economics,” she says. “So my goal immediately after is working here, and because I’m a government nerd I’d be happy to work in any department.” Along the way, she hopes to gain valuable experience for any aspiring politician. “I want to be able to do some of that work,” she says. “And then really figure out what I can do in political life to give back to Nova Scotia.”