Posted by James MacDonald on November 16, 2022 in Events 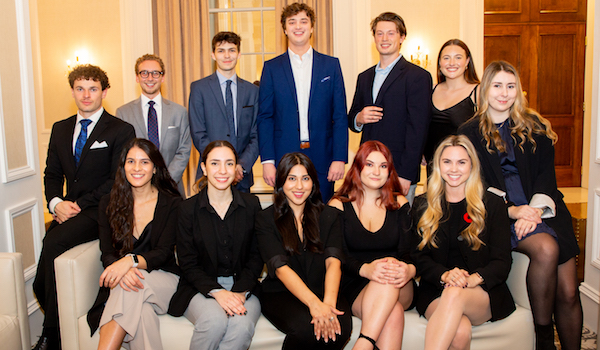 Three Dalhousie teams were among the fifteen teams who competed in the Ethics in Action case competition. Photos: Paul Adams (Adams Photography)

On November 4th and 5th, the Dalhousie Faculty of Management hosted the 10th and final Scotiabank Ethics in Action Case Competition and Gala. The competition challenges students with complex ethical dilemmas they are likely to face in today’s corporate world. Teams journeyed from across Canada to participate in this year’s competition. On top of that, Brigham Young University travelled all the way from Utah to compete. In total, a record number of 15 teams battled it out. The weather was beautiful, and teams got to experience our great city in the fall. It was an excellent way to cap off a successful 10-year run.

The case competition featured both an undergraduate and graduate stream. After two days of fierce competition, McGill finished first in the undergraduate stream, followed by Guelph-Humber in second, and our very own Dalhousie Commerce program in third. In the graduate stream, McMaster University finished first, followed by the University of Ottawa in second, and once again our own Dalhousie MBA program finished third. Congratulations to our winners and a big thank you to all teams for participating. Another big thank you to all judges and volunteers, as this event would not have been possible without them.

The Scotiabank Ethics in Action Gala took place the evening of Saturday, November 5th. Here, the winners of the case competition were announced by Dr. Kim Brooks, Dean of the Faculty of Management here at Dalhousie. Also, Scotiabank Regional Vice President, Karen Birss, presented Christa Big Canoe with the 2022 Scotiabank Ethical Leadership Award. The Award recognizes ethical leaders who, through their actions and decisions, have demonstrated character, courage, and adherence to ethical principles. 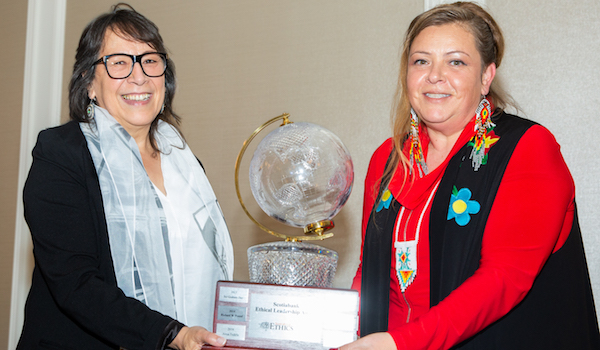 Ms. Big Canoe is an Anishinabek lawyer and mother who advocates on behalf of First Nations women and children. She is a member of Georgina Island First Nation and currently the legal director at Aboriginal Legal Services in Toronto. Ms. Big Canoe was also lead commission counsel to the National Inquiry into Missing and Murdered Indigenous Women and Girls. She’s led an Aboriginal Justice Strategy aimed at removing the barriers to accessing the justice system for First Nations, Inuit, and Metis people. Furthermore, she represented the families of students whose deaths are the subject of an inquest in Thunder Bay. Named one of Canada’s most influential lawyers in 2017, she has dedicated herself to being an advocate for justice and rights and is a changemaker who maintains the highest ethical standards. Christa Big Canoe is our 10th and final recipient of the award.

Ms. Big Canoe was also presented with an eagle feather from Dalhousie faculty members Dr. Sherry Pictou and Catherine Martin. Receiving an eagle feather is the greatest honour one can receive in Mi’kmaq culture. This presentation was accompanied by a traditional Mi’kmaq smudging ceremony. When accepting her awards, Ms. Big Canoe spoke on the importance of listening to one another as humans. She mentioned how much more can be accomplished when we communicate with ethics and respect. 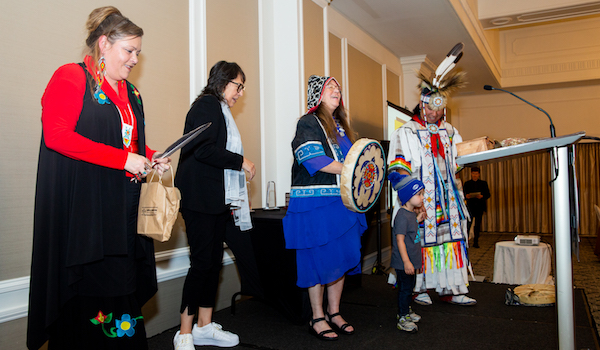 It has been an incredible 10 years for the Scotiabank Ethics in Action Case Competition and Gala. Hundreds of future leaders have competed and challenged themselves with complex ethical dilemmas. Furthermore, the Scotiabank Ethical Leadership Award was presented to 10 deserving corporate leaders. Starting off as a small competition created by students, the Scotiabank Ethics in Action Case Competition grew into a premier event for young ethical business leaders. While this was the event’s final year, its impact on the ethics of our future leaders will live on. Thank you for a great 10 years.