A Driving Force in Family Business

For its seventh Annual Legacy Dinner Dalhousie’s Centre for Family Business and Regional Prosperity was delighted to honour the Armour Family, owners of Armour Transportation Systems.  Wesley and Pat, along with their children Ralston and Victoria, joined the Dean of the Faculty of Management, Peggy Cunningham, on stage October 8, 2014 to share their family business story which began with Wesley's father Gordon Armour.

The company, now operated from its Moncton headquarters by Gordon’s son Wesley, is the 9th largest carrier in Canada. It has become one of Canada’s largest LTL carriers and has a fleet that has grown from the original two trucks to more than 4,000 well-maintained pieces of equipment.

Armour can also tell its customers where their package or freight is at any given moment.  All of its trucks are equipped with satellite technology, which allows drivers to enter their location and delivery details from the road. Armour is known for having one of the safest and most modern fleets in the trucking industry and some of its safest drivers. Its drivers have collectively travelled over 679 million accident free miles, making Armour a company with one of the largest collections of Million Mile Drivers in North America.

The company has received national and regional recognition from the industry and community alike. Armour is a multiple winner of the Canada’s 50 Best Managed Companies Award and the Shipper’s Choice Award. The company was recently recognized as a “Carrier of Choice” and was named the 15th Top Company in Atlantic Canada by Atlantic Progress.

All in the Family

The third generation of the Armour family also plays an active role in the company - Wesley and Pat's son Ralston, is President, Courier and Logistics and their daughter Victoria has recently joined as Director, Communications and Market Development. 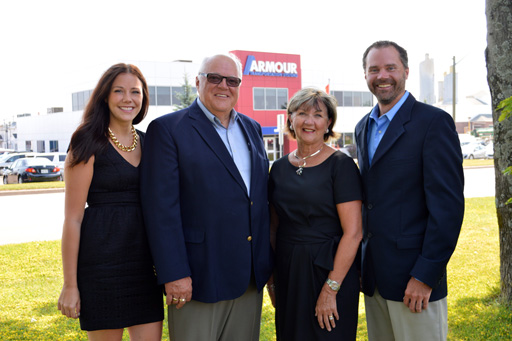