Honouring a prestigious legacy and an extraordinary man 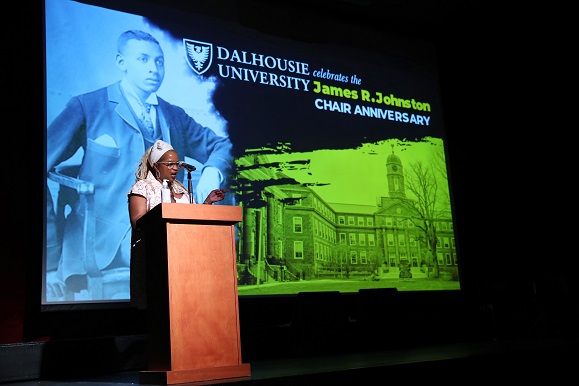 The evening began with a drumming ceremony by Drummers from Home, who opened the space with African and world beat rhythms. The ceremony was followed by a land acknowledgement from Dr. OmiSoore Dryden, the current James R. Johnston Chair who organized and co-hosted the event with Ms. Charla Williams, a descendant of Mr. Johnston.

Charla Williams is a great-niece of James Robinson Johnston, the middle child of seven born to Aleta, his niece and daughter of his brother Clarence. Ms. Williams attended the Transition Year Program at Dalhousie and completed her degree in 2007 and worked for more 40 years in the field of diversity, equity, and inclusion.

The James R. Johnston Endowed Chair in Black Canadian Studies honours Mr. Johnston and his accomplishments by building bridges between academia, locally and nationally, and the wider African descended communities through scholarship, research, and community engagement.

The James R. Johnston Chair is a significant senior academic post in Canada, established to honour not only the life of Mr. Johnston, but also to recognize and honour the unique historical presence of African Nova Scotian people. From the beginning, the Johnston Chair has been rooted in engagement with African Nova Scotian and Black communities, as noted by Dr. Dryden.

“Mr. Johnston was a family man and to properly fulfil the principles of the Chair and to honour the legacy of Mr. Johnston means developing strong ties with the family. The Johnston family has embraced me and supported the work of the Chairs over these past 25 years. I always knew that to have a successful celebration meant to centre the family. Black studies is rooted in radical political and activist movements, and Nova Scotia has vibrant and politically active African Nova Scotian communities, including the Johnston family. The Johnston Chairs have always acknowledged the centrality of community in Black studies,” says Dr. Dryden.

In his remarks, Dr. Saini echoed this connection as he welcomed the family to Dalhousie for the milestone event. “You are such an important part of Dalhousie’s history, Nova Scotia’s history and indeed the history of this country,” he said.

“Twenty-five years ago, Dalhousie University made history by becoming the first university in the country to create a dedicated, academic position devoted to Black Canadian Studies. Since then, four nationally recognized scholars who have held this position have each made ground-breaking contributions through their perspectives in the study of the Black citizens of this country and beyond.”

“The dedication shown by the people and institutions in initiating this position was a testament to the power of collaboration — among the university, government, industry, and the community. Nothing has changed in that regard in that there’s nothing we can’t accomplish if we work together,” Dr. Saini added.

A celebration of the Chairs

Dr. OmiSoore Dryden, the fourth and current James R. Johnston Chair (2019-present), is situated in the Faculty of Medicine. The first queer person to hold the chair, Dr. Dryden’s research engages in interdisciplinary scholarship that focuses on Black LGBTQI communities, anti-Black racism in health care, medical education, and Black health curricular content development.  Dr. Dryden hosts Chair Chats for Black students in health professions and graduate school and helped to establish the Sophia B. Jones Mentorship program for Black medical students at Dalhousie. Dr. Dryden is the co-lead of the new national organization, the Black Health Education Collaborative. Most recently, Dr. Dryden piloted the creation of the new Black Studies Research Institute at Dalhousie, which will focus on Black studies in STEM. 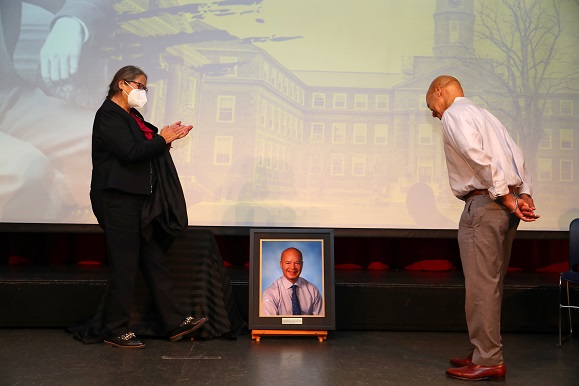 Dr. Judy MacDonald, Director of the School of Social Work, helped to unveil a portrait of Prof. David Divine, the second Johnston Chair (2004-2009).

“The Chair is unique in that it is very much a part of the community here. She or he is responsible and accountable to the community which paved the way for this very prestigious position,” Prof. Divine said. “And we in turn as individual Chairs must be transparent in what we do and show what we are doing, and that is critically important. We must be collaborative and work with others as equals. We are not more important than anyone else; we are part of everything else. This is a hugely important facet of this position.”

Prof. Divine added that he was deeply grateful to the family of James R. Johnston for their support during his tenure as Chair and received a standing ovation for his heartfelt remarks. 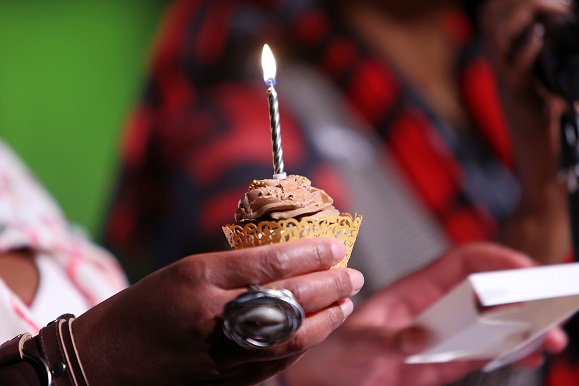 The celebration ended with a recognition of Mr. Johnston's birthday on May 12

The event ended with a closing drumming ceremony from Drummers from Home and a surprise for guests. Each table was adorned with chocolate cupcakes in recognition of Mr. Johnston’s birthday on March 12. To celebrate these milestone anniversaries and the birthday of a remarkable man, guests sang Happy Birthday to ‘Uncle Jimmy,’ as he was known to his family.