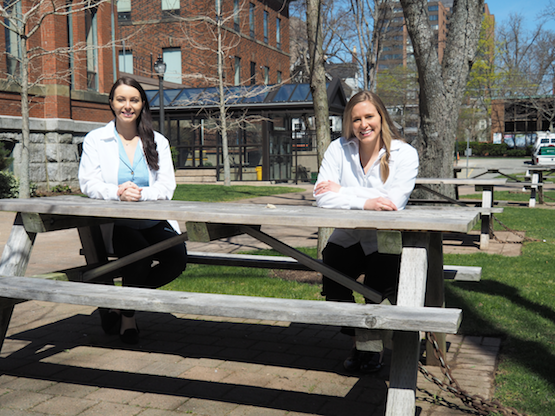 When Catherine Murphy (DDS’21) heard that another registered nurse had applied for the dentistry program, she was initially dismayed. It was highly unlikely two nurses would get in, she thought.

But that’s not how this story goes. Catherine and Micheline Jamael (DDS’21) were both accepted into the program, met on the first day of classes in 2017, and quickly became best friends.

Returning to the classroom
Catherine and Micheline went into nursing knowing that the health-care world was the right place for them. They wanted to be able to help people in a hands-on role in the community. Nursing ticked all those boxes and they both worked as nurses for a few years after graduating, Catherine in the Pediatric Medical Unit at the IWK Health Centre in Halifax and Micheline in the emergency department at the Cape Breton Regional Hospital in Sydney.

At the back of both their minds, however, was the feeling that there was a different health-care role waiting for them. For Catherine, who had seen her mother study for a masters and a PhD in nursing, there was a sense that you could “do many different things” with a nursing qualification.

She considered medical school and becoming a nurse practitioner, but dentistry appealed because it was “a good mix of going back to get a higher level of education and being able to work directly in the community helping people”.

Micheline always wanted to be a dentist. “I was one of those strange kids who loved going to the dentist. I loved taking care of my teeth and I was fascinated by the drills.”

She admits, however, that when she was 16, “my friends were more important to me than taking physics” in high school, which she thought meant that she couldn’t take it at university. So she opted for nursing because it offered the combination of hands-on working with people and health care she was looking for.

The dentistry dream didn’t go away, however. “I didn’t want to regret it if I didn’t go back to see what I could do,” she says.

Micheline dropped back to part-time at the hospital and returned to university to get the organic chemistry, biochemistry, and physics credits she needed for dental school. “I loved biochem and organic chemistry, but physics. . .I did well in the end, but I definitely worked hard.”

Catherine also returned to university – while continuing to work at the hospital – to pick up the prerequisites she needed. “I was back in first-year science courses with 18-year-olds and there were many moments when I wondered if it would all be worth it.”

Some things were familiar, some were not
Once they entered the dentistry program, however, they both found that they had a lot of education and skills that carried over into their dentistry training. Anatomy and pharmacology were all familiar territory, and their skills in inserting IVs, dressing and managing wounds, carrying out sterile procedures, charting, and communicating with patients were also useful.

Even so, studying dentistry was still a big change. “In first and second year we were working on plastic teeth for the first time and there were a lot of competencies we had to pass,” explains Catherine. “For a lot of us, we had to learn to fail for the first time – and to stop seeing it as failure. It was just part of the process of learning new skills, like falling down when you’re learning to ski.”

For Micheline, her nursing experience made communicating with patients and administering local anaesthetic easy. What was more difficult was getting used to the drill and other hands-on skills, plus learning a new language of dentistry. “The whole scope of dentistry and its terminology was completely new to me,” she says, “and not something we would learn in nursing.”

Catherine and Micheline acknowledge that their shared background created a bond between the two of them right from the start. “We were just drawn together,” says Catherine, “and we studied for every exam together. I don’t think I could have done it without her.”

What they didn’t anticipate was the closeness of the whole class. Early in their first year, Dr. Ferne Kraglund told them that they would “leave as family”. For both Micheline and Catherine, the bonds with classmates developed over many shared hours in the labs and the clinic cubicles.

“Everyone understands what you’re going through in dental school, you spend countless hours with your classmates, so it’s a special connection you make with each other,” says Catherine.

Different futures, but still connected
After graduation, Catherine and Micheline took different paths. Catherine has returned to the Faculty to do a one-year general practice residency, while Micheline returned home to her husband – whom she married in the summer after her first year in dental school – in Cape Breton. She started work at the Sydney Family Dental Centre with Dr. Stephanie Hillier (DDS’16) in the spring and she and her husband welcomed their baby boy, Kayce, on September 17.

Micheline and Stephanie met for coffee during Micheline’s second year through some mutual connections and decided then that Micheline would take the spot of a retiring dentist, with the option to buy into the practice in the future.

Catherine has always played and coached sports, including speed skating and track and field for the Special Olympics. During her time at dental school, she participated in Sharing Smiles Day and the provincial Special Olympics, carrying out dental screenings on the athletes. Her Table Clinics project was on access to care for special needs patients.

“I have a real love for the special needs population,” Catherine explains, “I also enjoyed the public health elective, which provides care to people who wouldn’t otherwise have access to it.” She says that doing a GPR will develop her skillset and equip her to provide care for all populations when she works in private practice.”

Their nursing backgrounds brought Micheline and Catherine together at dental school and their shared experiences will help to keep them together. “Catherine is definitely a lifelong best friend,” says Micheline, “and she will also be Kayce’s godmother when he is christened.” 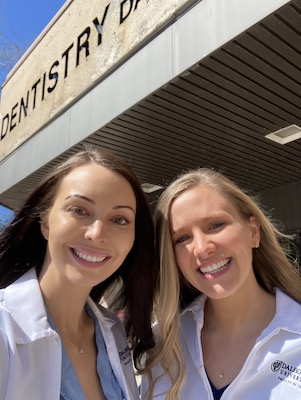