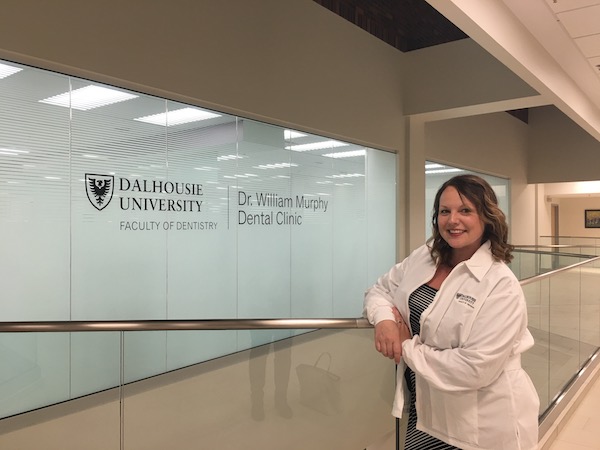 Melanie Mansfield in the Faculty of Dentistry. (Contributed photos)

Melanie Mansfield (DDH’20) is from a military family, so she is no stranger to moving. But leaving her husband and two children at home in Goose Bay, Labrador, while she travelled to Halifax to study dental hygiene at Dalhousie University proved to be perhaps her most challenging adventure.

Melanie always wanted to “go to Dal and get something great”. But life intervened: she trained as a dental assistant, married early, had two children, and the family moved to a new military base every few years when her husband Joe received a new posting.

The dream of going to Dal didn’t go away, however. And at the age of 34, Melanie was finally able to make it happen.

Making it happen
Melanie, Joe, and their two daughters, Emily and Lily, have lived in Goose Bay for nearly four years. Normally around this time, they would be anticipating Joe’s next posting. But Emily will graduate from high school in two years, so the Mansfields will stay until then.

The family enjoys all that Goose Bay and Labrador have to offer, including dog sledding, ice fishing, and ski-doing, and they spend a lot of time at the rink, where Lily figure skates.

But there were no dental assistant jobs available for Melanie, which did not sit well with her. “I can’t sit and twiddle my thumbs,” she says.  “I need to go out and do things.”

Qualifying as a dental hygienist would give Melanie more job opportunities as well as a role that offered new responsibilities and the ability to work independently.

Her first step was to find out what she needed to be able to apply to Dal. The admissions team in the Faculty of Dentistry directed her to the College of the North Atlantic in Labrador. Through a mixture of online and in-class courses, and “a lot of studying”, Melanie was able to gain the university credits she needed to be able to apply for admission to the diploma in dental hygiene program.

Melanie only applied to Dal. It was where she wanted to be. So it was quite a blow not to be accepted at first. “But I must have been near the top of the waitlist because I got a call back pretty quickly. I was so happy.”

The family had talked about Melanie’s plan to return to school and considered what it would mean for them all. Even so, it was still a big change for everyone.

“Joe had never been in the position of raising the girls on his own before,” says Melanie. “We don’t have any family in Goose Bay and many of our friends have been transferred out. There wasn’t a lot of back-up support for him.” 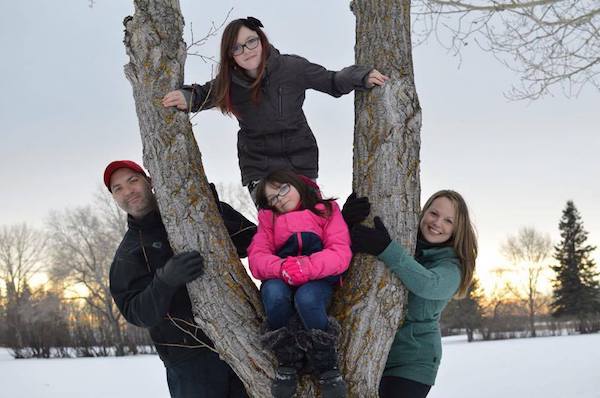 Ten courses in first term
On August 27, 2018, Melanie arrived at the Faculty of Dentistry. “I walked up to take it all in,” she says. “I had this overwhelming feeling of how lucky I was.”

The feeling of good fortune was muted somewhat by the reality of the program. Faced with ten courses first term, Melanie found it “very intense”. At the same time, she marveled at the support she received, from classmates who “became like family” to the “wonderful dental assistants who provided what you needed”.

“I loved the professors. They genuinely care about your learning,” says Melanie. You could go up to any of them – and I did – and they would listen.”

One low point in first year was physiology. “At the time, I thought this is the course that is going to take me down. It was really challenging.”

But Melanie believes that the dental hygiene program is “set up for success”. Study sessions with classmates helped and, by second year, Melanie “understood why we have physiology as a course”.

Another blow was the discovery that the first year of the dental hygiene program contained a third term, between April and July. “I don’t know how I missed that information, but I did. It meant that I had eight weeks with my family that summer rather than three months.”

But the positives won out hands-down, from the “beautiful clinic” and the quality of the teaching, to the camaraderie of classmates and some of the off-campus rotations offered.

“I really enjoyed our rotation at the North End Community Health Centre. It’s a pretty special place and it gave us a sense of what real world practice would be like. I felt comfortable there.”

COVID-19 brought an early finish to the term and a speedy return to Goose Bay. Although she was happy to be home, Melanie feels that she had missed something.

“In the second semester of second year, something clicks. You have your techniques down and that’s when the professors give you their tips. I would have liked more of that. They are great teachers. Everything I ever wanted from the program, they delivered.”

Back in Goose Bay, Melanie found family life a bit tricky. While she was away, the girls increasingly turned to Joe for the things they needed. She wondered where she fitted in. Bizarrely, COVID-19 has helped to bring the family together by enabling them to spend more time together over meals and playing games.

“I’m more valuable now,” she says. “I have knowledge of both areas, so I’ll be keeping both licenses.”

Looking back on her experiences over the past two years, Melanie says she sees it as a “personal triumph”. It was hard but ultimately doable. “I’m not a quitter,” she says. “Once I put my mind to something, I usually follow through.”

She also knows that wherever the family moves next, she won’t have to sit and twiddle her thumbs. 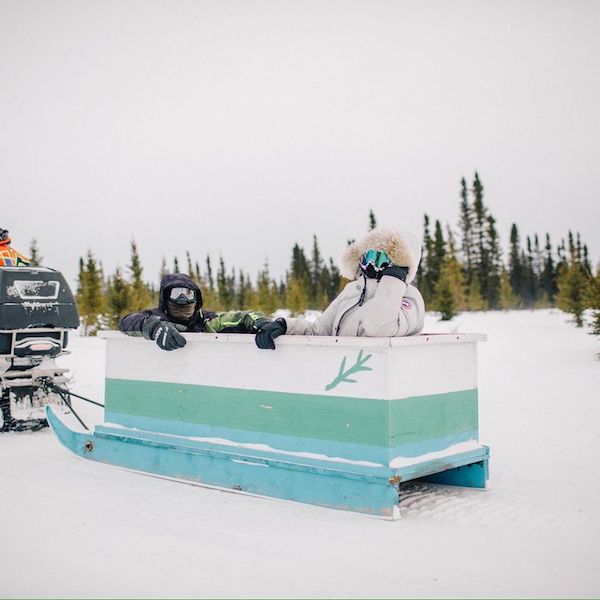