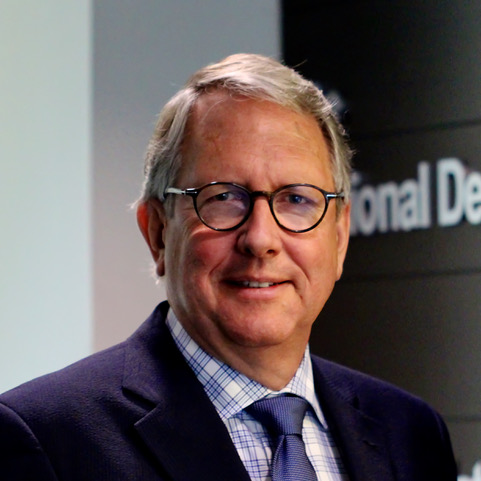 Dr. Jack Gerrow takes a break from assembling IKEA cabinets at home in Ottawa to talk about winning the 2018 Gies Award for Outstanding Innovation by a dental educator in support of dental education, and the career that led to this honour.

Gerrow is is extremely excited to have received the award but remarkably down-to-earth about his achievements. A Gies award is a big deal in the dentistry world, and even more so if you are Canadian. Only a handful of Canadians have received this award, which is presented by the American Dental Education Association (ADEA) ADEAGies Foundation..

“There was not one Eureka moment, for sure,” he says, reflecting on the early beginnings of what was to become a remarkable and much-lauded career in teaching and education, culminating in his most recent role as registrar and executive director of the National Dental Examining Board of Canada (NDEB). “It was a long process that involved many opportunities and mentors.”

A career that started at Dalhousie
Gerrow’s teaching career began as an assistant professor at Dalhousie University in 1985.  He arrived with a doctor of dental surgery degree from the University of Toronto (’79) and a master of science and certificate in prosthodontics from the University of Iowa (’85). And it was in Halifax that he spent the next 29 years inspiring students, winning teaching awards, and honing his thinking on competency-based teaching and assessment.

“I had experienced strengths and weaknesses during my education at two different universities. When I came to Dal, I was concerned with making teaching meaningful for students,” he says.

“I remembered that, as a student, I felt insulted if a course was poorly organized and wasted my time.” He found he gained the most from courses that were efficient and organized, set learning objectives, and then tested learning against those objectives.

When it came to teaching dentistry, two things at Dal were different, says Gerrow. The first was that there was support for faculty members to learn how to teach. This included being encouraged to attend the Association of Canadian Faculties of Dentistry Summer Teaching Institute. Almost all new faculty members at Dal participated in this two-week teaching boot camp. “That was very influential for me,” says Gerrow. “It provided us with the educational background to feel confident about making changes to our teaching program.”

The second was that he was able to enroll in a pilot program at Dalhousie that led to a master of education in curriculum studies. Twelve faculty members from dentistry and dental hygiene participated in the program, which was designed for professional educators in the dental and dental hygiene fields, and took three years of part-time and summer session study to complete.

After just four years of teaching, Gerrow received the Dalhousie Alumni Association Award for Excellence in teaching in 1989 – the first time it had been won by anyone from the Faculty of Dentistry.  He also completed his MEd in 1990.

“The MEd program was pretty innovative at the time,” Gerrow says. “Bruce Graham, who was associate dean of academic affairs, pushed it for all the right reasons. It was truly the only one of its kind, but unfortunately it didn’t sustain itself.”

For Gerrow, however, the impact of the program was long-lasting. Almost immediately he found himself heavily involved in a zero-based curriculum review within the Faculty. “It was quite dramatic,” he says, explaining the process. “It’s where you basically throw out all the existing courses – none of the old courses survived – and rebuild from the ground up.”

“There was a lot of redundant teaching,” says Gerrow, “because instructors didn’t know what their colleagues in other specialities were teaching. Everyone was operating in silos and basic science was taught in a vacuum far removed from the clinical sciences.”

The new courses focused on diseases and conditions, including cariology, periodontology, and growth and development, rather than specialities, such as endodontics. The new curriculum was implemented in 1992 and enthusiastically accepted, probably, says Gerrow, because it was developed by faculty from the grassroots up.

“In the 1980s and early 90s, the licensing examinations were developed without using blueprints – guidelines for the number of questions in the different areas being tested,” explains Gerrow. “As a result, whole areas of the discipline could be missed. We worked to create a blueprint for a national exam based on the national competencies that would, therefore, test what was important.”

Gerrow went on to publish numerous articles about how to develop competency-based teaching and assessment, asserting that that you “need to know what your objectives are before designing a course”. 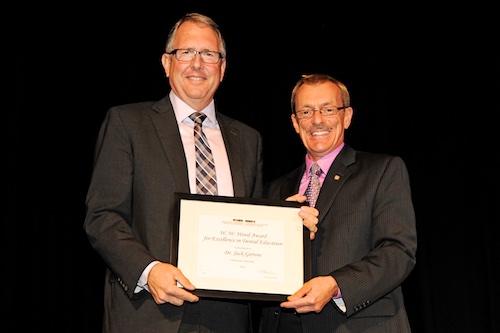 Put up or shut up
When the registrar’s position at the NDEB became open in 1994, Gerrow applied. “I had been critical of some things so it seemed like an opportunity for me to put up or shut up.”

Teaching to competencies meant that dental boards would also need to test to competencies. For the next 23 years, Gerrow and his team at NDEB worked to refine the exam, evaluate its effectiveness, and expand the use of the exam to other countries.

It is an impressive legacy, crowned by the 2017 Gies Award, which will be presented to him in Florida in March.

“I am grateful, particularly to my nominators, because I know how much work it is to put together a nomination package. It’s a very nice recognition and somewhat unusual in coming from an American association. I feel very fortunate to have been at Dal during the time I was there and to have received the support of some wonderful mentors, such as Bill MacInnis, John Eisner, Dan Macintosh, and Doug Chaytor.”

It is a fitting reward for someone who has, in turn, been a mentor to many, a model of teaching excellence, and, as one of his former students described him, “a dynamic and powerful communicator who possesses the gift of being able to make complex subjects understandable”.

Jack Gerrow will retire from the NDEB at the end of this year. Although he will work on some “minor contracts” and volunteer on some university and international boards, he is looking forward to improving his French and spending more time at the cottage and with his family in Ottawa, California, and Malta.