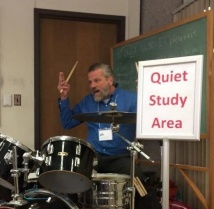 Professor Baur’s primary areas of research include nineteenth-century music, American music, Russian music, cultural studies in music, and popular music studies, and he has published articles, book chapters, and reviews on these and other topics. Current research projects include a book-length study investigating the role of music in defining notions of class, gender, and race in nineteenth-century America and an article tracing the cultural history of the backbeat. Dr. Baur is also an accomplished drummer with numerous live performances and recordings to his credit.  He performs in Halifax with The Sorrys, who recently released their third album.