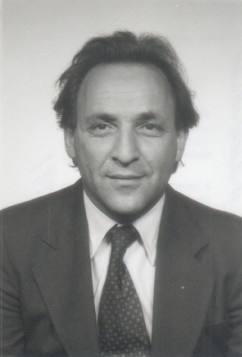 Dr. Yuri Glazov was born in Moscow, Russia in 1929 and passed away in Halifax, NS in 1998. His early years coincided with Stalin’s purges and then the Second World War, circumstances that influenced the young Yuri profoundly.

From his childhood on, he was filled with compassion for his country, its citizens and with a great love for the written word. In 1968, he reached a turning point in his life: a scholar with the Academy of Sciences and a Professor at Moscow University, Dr. Glazov felt morally compelled to sign the protest letters against a new wave of repression in Russia. His dissident activities led to his persecution by the authorities, but he left his mark: his fight for freedom alongside other dissidents fertilized the soil in which Soviet liberalization grew a generation later.

Dr. Glazov considered himself fortunate in that he was able to witness the disintegration of the Soviet empire in 1991. Shortly after the collapse of the Soviet Union, Russia's Academy of Sciences invited him to accept their official apology as a token of their esteem for the position he had espoused and the role he had played. Back in 1972, however, after losing the job he loved, being blacklisted, and facing constant harassment by the KGB, he and his family were forced to leave their homeland.

In 1975, via Italy and the United States, Dr. Glazov and his family moved to Halifax, NS where he took up an appointment as a Professor in the Department of Russian Studies at Dalhousie University. Here, Dr. Glazov played an important role in the development of the department until his retirement in 1995.

Dr. Glazov believed that a liberal education is intimately bound up with a sense of citizenship and civic responsibility. To honour his memory, the Professor Yuri Glazov Memorial Award will be given to a student who has demonstrated excellent academic performance and who is engaged in extracurricular activities. Preference will be given to students taking courses from the Department of Russian Studies at Dalhousie University.

We heartily encourage your support of this award

You can make a donation online by filling out our secure online pledge form. If you prefer to mail your donation, please download and fill out our pledge form [PDF - 1.9mb].

Regretfully, we cannot process online gifts from US citizens or residents who do not have such affiliation with the university. We ask these donors to kindly print a copy of this PDF form [PDF - 123 kB] and forward as per the instructions enclosed. Please note: cheques must be drawn on an American account in US funds.