Posted by Communications, Marketing and Creative Services on May 4, 2021 in Community Highlights
Digging in the dirt.

Toby is a Norfolk terrier who lives with Andrea Drysdale, a prospect research analyst in the Office of Advancement. 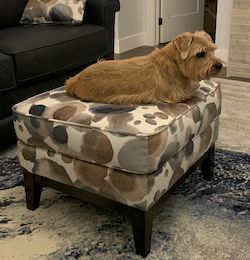 Name: He has a fancy Canadian Kennel Club name but at home he’s just Toby.

Nickname: Too many to count. “Tobes” is the least silly.

Fave food:  Chicken. He should have sprouted feathers by now.

Best quality: Loves people. He’s a little “spicy” when he meets bigger dogs, but they usually get along after an initial appraisal.

Social media platform or handle, if available:  None.

Don't forget to check out the previous pets we've featured in this space this month — Penny — as well as pets from previous months:

The month in pets: January

The month in pets: February

The month in pets: March

The month in pets: April