Posted by Communications, Marketing and Creative Services on April 27, 2021 in Community Highlights
Meow.

Noëlle lives in Halifax with Angela Siegel (Faculty of Computer Science) and her family, including three children.

Name: Noëlle first joined the Siegel family when she was four weeks old. She was the 13th foster kitten that the Siegel family had taken into their home for the SPCA. She was the sole surviving kitten from her litter. It didn’t take long before this fluffy little cutie made herself at home. Just before Christmas, they chose to adopt her (hence the name). 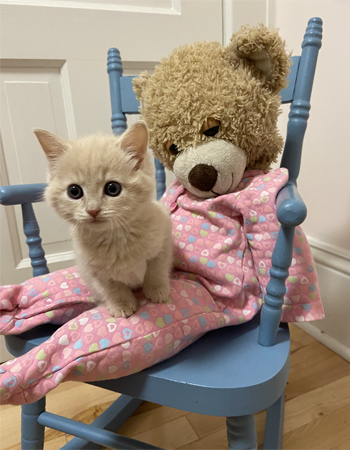 other name that sounds as sweet as she is!

Species/breed: Unclear! She’s a perfect blend of buff-coloured cuteness – but her background is not known. While we’re sure she’s not a whale shark, she does have stripes and spots!

Favourite food: Treats munched out of your hand.

Special tricks: She can fall asleep within seconds of playing at full speed!

Best quality: She’s super cuddly yet super playful! She loves to be wherever her people are and will follow them around throughout day and night.

Social media platform or handle, if available: On Instagram @_foster_kitten_antics_

The month in pets: January

The month in pets: February

The month in pets: March