At the centre of the world: Dal chemist celebrated for building the fundamental science of her discipline

“Chemistry is often called the central science because it overlaps with physics and biology. It is everything around us. Everything can be explained through chemistry,” says Erin Johnson, the Dalhousie theoretical chemist named the most recent winner of the Steacie Prize, one of Canada’s most prestigious awards for early-career scientists.

And, if everything is chemistry, Dr. Johnson is in the centre of it all, developing and implementing the computational methods that help the world understand how matter is put together, right down to the atoms and molecules.

Unlike the picture most people conjure when they think of a chemist, Dr. Johnson doesn’t conduct experiments with beakers and test tubes or produce reactions that can be seen with the eye. Her work is done with equations and computers that allow her to understand and predict reactions at an atomic level, without ever stepping into a lab.

“Say you have a catalyst that works well, but it’s not the optimal one. You can take the framework that you already have and tinker with it by varying substituents. You could look at 10, 20, 100, maybe even 1,000 different combinations of substituents using a computational model to try and find the best material for your end use.”

Dr. Johnson says that with the right computational scheme, hundreds of possibilities can be crunched in a few weeks, instead of a few years and without one drop of chemicals being used. However, even more importantly, she says the process can deliver a deeper understanding of how chemicals interact. Computational chemistry is not only about identifying the best way to create a reaction, she says, but understanding why it’s the best. 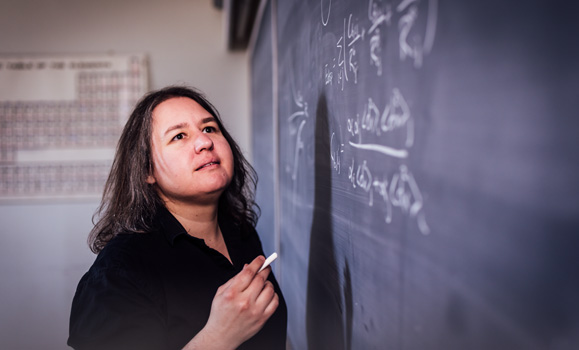 The centre of the onion

Dr. Johnson and her research group at Dal focus on intermolecular chemistry, studying the forces between molecules that facilitate interactions. It is fundamental science by its nature, but the impact of the work can be felt across a huge range of leading-edge applications from pharmaceuticals and solar cells to batteries and organic electronics.

“Think of it like an onion where the last layer is the commercial application, we’re at the centre,” she says, explaining that her work is providing a scientific core from which successive layers of science radiate, with the last layer being product development.

“We can apply computational methods in collaboration with experimentalists, or other groups can take the methods we’ve developed and use software in which they’re implemented to apply them to real world problems.”

Currently Dr. Johnson’s work is focused on predicting crystal structures. She is using models to anticipate entire structures from just one crystal molecule. She says the research has promising implications for several areas, including the pharmaceutical industry.

That means a drug that appears soluble in the body, might not be by the time it’s swallowed by the person who needs it. Being able to predict the most stable version of a crystal can ensure its integrity in a medical compound endures, and so too its medicinal effects.

The Steacie Prize is a cash award made annually by the Trustees of the E.W.R. Steacie Memorial Fund to a researcher who is 40 or younger for outstanding research conducted in Canada. The prize has been presented since 1964. It was named for leading Canadian scientist Edgar Steacie, a physical chemist who served as president of the National Research Council of Canada from 1952 to 1962. Dr. Johnson’s is the first Steacie Prize to go to a Dalhousie researcher and the first awarded to a scientist in Atlantic Canada. Her win will be celebrated with a public lecture and reception, where she will be presented with a plaque to commemorate the award.

“Dr. Johnson’s remarkable research leadership and impact have helped Dalhousie to become a centre of excellence for theoretical and computational chemistry,” says Alice Aiken, Dalhousie’s vice president research and innovation. “Her substantial contributions to this important area of discovery are providing a foundation to build the emergent technologies of tomorrow.”

Dr. Johnson is an extremely prolific researcher, having published 134 papers that have been cited 20,860 times to date. She is also credited with developing some of theoretical chemistry’s key computational methods, including the eXchange-hole Dipole Moment (XDM) dispersion method; the Becke-Johnson exchange potential; and Non-Covalent Interaction (NCI) plots. These methods are used by chemists in their daily work to build knowledge and make important new discoveries.

“This award highlights the impact that Dr. Johnson’s work has had on researchers around the world and their breakthroughs that rely upon her innovations,” says Chuck Macdonald, Dalhousie’s dean of science. “I would like to congratulate Dr. Johnson on this outstanding achievement and her many contributions to research, discovery, and student mentorship here at Dalhousie.”